So The Mimic is Probably Going to Die Soon

This is a preview for issue #2, which comes out this week. 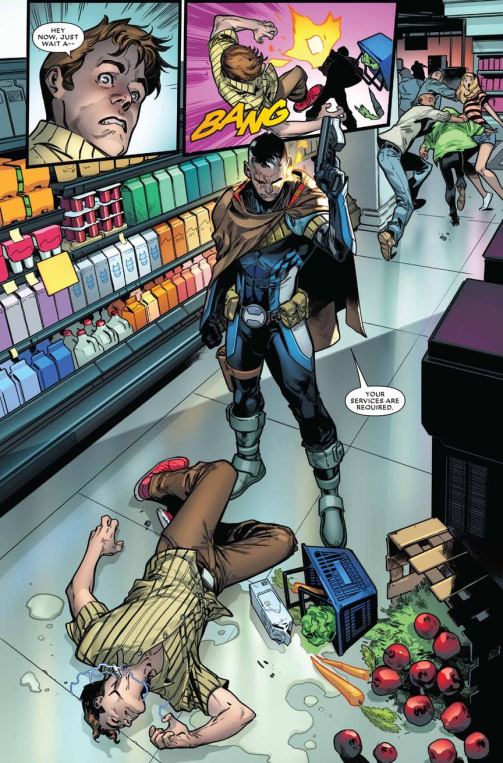 Obviously, Calvin Rankin isn’t dead in those pages, he’s just subdued and will likely show up later to serve some purpose.

But c’mon, we all know how this ends. You don’t bring the Mimic out of comic book limbo like this if you’re not going to kill him somehow. That’s how comics work, and more importantly, that’s how my luck works.

(For example, this week also features the final issue of the New Mutants mini-series, where we’ll learn the final fate of Strong Guy. Considering he wasn’t part of that big Uncanny X-Men group shot, it’s not looking too good for him either.)

For those who aren’t paying attention, Extermination is the final story featuring the time-displaced teen X-Men. That guy up there shooting Mimic is a younger version of Cable, who has traveled back in time to kill people. He’s already killed adult Cable (a character who definitely won’t stay dead for long) and Bloodstorm, that alternate reality Storm who is a vampire, and who has randomly been a part of the teen X-Men comics for awhile. I dunno.

Suffice to say, however Extermination uses Mimic, I’m pretty much resigned to the fact that he’s probably going to die by the end.

There’s almost no point in getting excited for when my favorite comic book characters show up anymore…It’s far more likely that they’re going to be killed than it is for them to do something awesome. How messed up is that?!

Can you believe we have to wait all the way until November for another superhero movie? Man, what’s wrong with the world? Good thing we’ve got other comics to fill the time! Detective Comics, Hulk comics, Wonder Woman comics, X-Men comics and Squirrel Girl comics!

Unbeatable Squirrel Girl wins Comic Book of the Week because Ryan North and Erica Henderson revel in what it would actually be like to visit the Savage Land!

I checked in on Amazing Spider-Man this week but decided not to review it because it’s largely a Secret Empire tie-in and I’m not super keen on reading or reviewing a ton of tie-ins. Thankfully, this tie-in is largely focused on Dan Slott’s ongoing story of Doc Ock taking back Parker Industries, so I dig that part of it. And it moves the Spider-Man/Mockingbird relationship forward a little, which I also like. But mostly it was a big, busy, crazy issue. So good times there!

END_OF_DOCUMENT_TOKEN_TO_BE_REPLACED

I need to read more DC Comics. There’s no getting around it. This week saw an overflow of Marvel Comics that I read, but I only found time to review one DC Comic. It’s shameful! To say nothing of my apparent inability to read any indie comics. I’m not trying to be a Marvel Zombie! I’m not!

But Marvel delivered both the best and the worst this week. For reasons I wish I had an answer for, the new Hulk series seemed to implode this week, undoing everything that made this series special. Meanwhile, Ms. Marvel kicks off a new story with everything I love about this comic, so I’m rather pleased to award it Comic Book of the Week!

What a perfectly cromulent throw

Secret Empire had a weird little issue this week. The idea that Captain America and HYDRA have completely conquered the United States has shrunk in scope to a race between two super-teams to get pieces of the broken Cosmic Cube. It makes for a fun enough comic as the two teams get treated to a family dinner from Ultron Pym.

Also, Batman has kicked off a rather continuity-heavy, mind-erasing bit of big story at DC. Gotta get caught up on that!

END_OF_DOCUMENT_TOKEN_TO_BE_REPLACED

It’s not often that I like to toot my own horn about these comic book reviews. I’m nobody special. Just a comic book fan who likes to read comics and share my thoughts and opinions each week. But I noticed something rather interesting a few weeks ago — beginning with issue #3, I might be the only reviewer on the entire Internet who stuck with Mosaic.

See all those single reviews for issues 3-8? That’s just me. So I have been the only Internet comic reviewer chronicling the downfall of Mosaic. That’s just kind of weird. But it is an honor I take seriously.

It is with a kind of heavy heart that I must also be the only reviewer to chronicle the final issue of Mosaic. And you know what? It was a damn good issue, and I think I’ll give it Comic Book of the Week. Let it go out on a high note.

END_OF_DOCUMENT_TOKEN_TO_BE_REPLACED

Greetings everyone! Last week I missed out comic book reviews because I was in the hospital. And this week, I’ve not only been busy at work, but I’m also busy today putting together shipments and packages for everybody who ordered the Gamer Girl & Vixen graphic novel! It’s been a busy month, let me tell you.

So there won’t be too many reviews this week, unfortunately, but we still had some solidly entertaining comics. All-New Wolverine, Detective Comics and Amazing Spider-Man were all good, and the third issue of X-Men Blue takes home Comic Book of the Week for another nice issue, solidifying it as my favorite (so far) of ResurrXion.

Meanwhile, last week I missed the first proper issue of Secret Empire, and I enjoyed it. People are welcome to hate this Captain America as a fascist storyline all they want, but I’m digging the heck out of it. I think it’s a pretty great premise for a big, company-wide crossover. I really hope they can pull this one off.

Also, I skipped the new issue of Silver Surfer this week for a couple reasons, but the end of the issue was as big a gut punch as some of the best issues of Saga. Masterful work, Mr. Dan Slott.