Here’s All Those Amazing DC Movie Trailers from FanDome!

DC FanDome was yesterday and, holy cow, did they ever deliver! Hollywood may be in a bit of a standstill because of the virus, but that doesn’t mean moviemaking is dead! DC and Warner Bros are apparently churning out some real bangers! And we saw so many great trailers at FanDome yesterday.

Let’s dive right in, shall we?

First up is The Batman by director Matt Reeves, with Robert Pattinson starring. This trailer looks dope as hell.

I like the look of the costume in action. And I love the tone of the trailer. As much as I might be interested in taking Batman in some new directions, I can’t deny that Batman done right is still damn cool. A serious, grounded take on Batman as he tackles corruption in Gotham City and tussles with more than just the Joker sounds great to me! I think this was my favorite trailer of the day.

Another great reveal was the lineup to The Suicide Squad by director James Gunn. Not a full trailer, just a great reveal of the characters who are gonna show up!

I think that’s a great teaser! The cast and the characters look awesome, and we already know James Gunn can deliver. Need proof? Here’s a behind-the-scenes look at the filming of The Suicide Squad!

As much as I’m a Marvel fanboy and can’t wait to see Gunn return for Guardians of the Galaxy vol. 3, I am pleased as punch with everything shown here about The Suicide Squad. This is gonna be good.

Of course, The Batman and The Suicide Squad are a long ways away. We’ve actually got Wonder Woman 1984 coming sooner rather than later. How does that look?

It looks OK. Not as amazing as I would have hoped. And Cheetah looks way too CGI-heavy for my tastes. I think they could have showed her off better in this trailer. But everything looks largely OK. I think Wonder Woman 1984 is going to do just fine.

That is, if we ever get movie theaters back…

Lastly we’ve got the first official look at Zack Snyder’s Justice League. And I think it looks like hot garbage.

I am not a Snyder Fanboy or a #ReleasetheSnyderCut person. I have loved some Snyder movies, like 300 and Watchmen, but I think his DC Comics work has been terrible. I think Man of Steel is the worst. Batman v Superman: Dawn of Justice was OK in the theater, but I have really soured on it since — same with Justice League. These are bad movies, and Snyder is to blame.

So I do not have any hopes for his remastered Justice League movie. None of these new scenes look good, and “Hallelujah” is a terrible choice for the trailer.

Of course, I’m still going to watch this 4-hour monstrosity when it comes out. Perhaps I’m wrong and it’ll be good for once, but I doubt it.

Overall, DC did great at FanDome, as far as I’m concerned. I’m glad to see they might finally be getting their act together with these movies.

The Wonder Woman sequel is on the way! Wonder Woman 1984 is just around the corner, and it’s first trailer has arrived out of nowhere! And I’m not entirely sure what the movie is about!

We’ve got Steve Trevor back from the dead and getting confused by the 1980s. We’ve got Cheetah not being a cheetah. We’ve got a really weird looking Maxwell Lord. And we’ve got Wonder Woman using her lasso to swing from lightning bolts! I bet that was an exciting pitch in the Wonder Woman 1984 scripting process!

I’m still going to get my hopes up for a good movie! Wonder Woman 1984 comes out on June 5.

These are the best comic book weeks! Sometimes I’ll get a couple of comics on my Buy Pile to pick through, see what I like or don’t like. But weeks like this one was stuffed with my favorite comics! We’ve got Runaways, we’ve got Mr. & Mrs. X, we’ve got Go Go Power Rangers! It’s like I’m being spoiled!

We’ve also got G. Willow Wilson’s final issue of Ms. Marvel, a bittersweet but otherwise wonderful moment! I wanted to give it Comic Book of the Week to mark the occasion, but it had to go up against the first issue of Mark Russell’s Wonder Twins comic. I can now die a happy man for having read Wonder Twins #1.

Four decades in the making

That’s not to say Wilson’s final Ms. Marvel isn’t fun! Read that too!

END_OF_DOCUMENT_TOKEN_TO_BE_REPLACED

Hoo boy, I don’t have many review columns like this one. I’m not paid by anyone to do this blog, nor do I get kick backs or free comics from any of the major publishers I review. It’s just me, some dude, buying and reading comics, and then writing up my thoughts on a hobby blog. And as such, I really only buy and read comics I enjoy.

But sometimes there comics I want to try that just turn out bad. And this week saw a slew of bad or problematic comics, from Ironheart to Wonder Woman to the final issue of the big Uncanny X-Men storyline. I apologize in advance for being mean to these issues. Fortunately, the latest issue of Fantastic Four was still enjoyable, so it gets Comic Book of the Week! 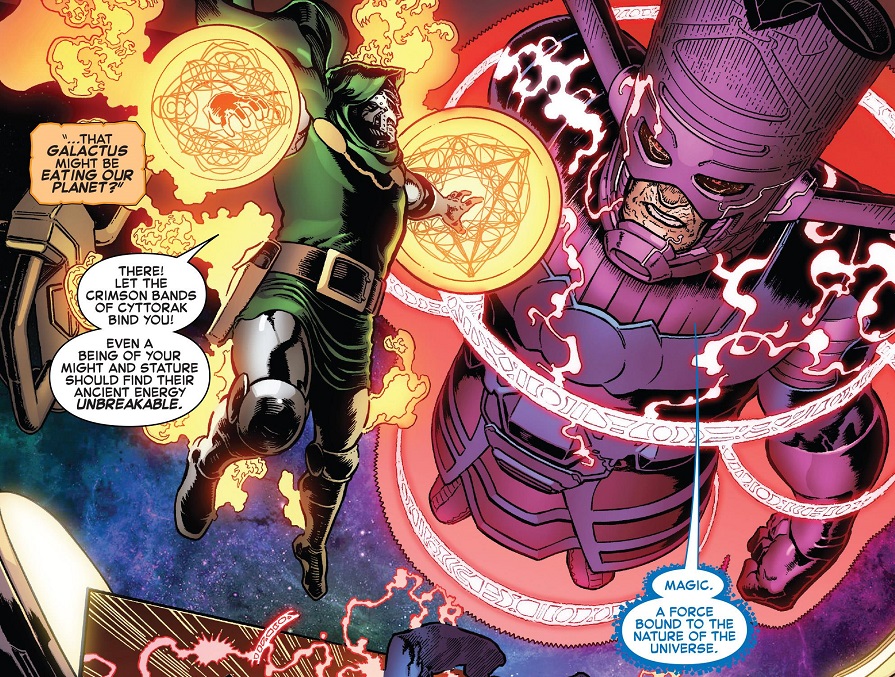 I love when Doctor Doom uses the Crimson Bands of Cyttorak!

Meanwhile, I think I’m going to drop Catwoman. The opening story arc was fine, but I’m not all that interested in Catwoman as a character right now, and the series just didn’t grab me. Joelle Jones is a fantastic creator, though. I love her art.