Say hello to Henchie, the new Henchman-4-Hire mascot! I’ve been meaning to create my own iconic mascot since I started this blog upwards of six years ago, but through sheer force of laziness, it never happened! But jokes on you, Past Sean, because the future is here and the mascot is now! 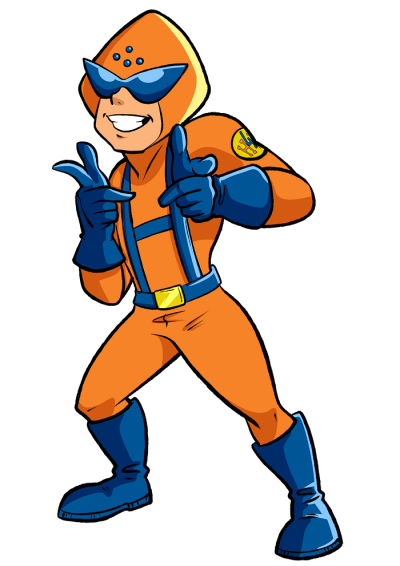 Henchie was designed and drawn by artist extraordinaire Gemma Moody, the artist on my comic series, Gamer Girl & Vixen. I knew she was the perfect choice to draw a fun and friendly mascot. She’s superb! And she’s open for commissions if you’d like your own artwork!

Sometime soon — probably tonight (Update: or right now, actually, I got tired of waiting) — I’m going to add Henchie to the blog. I’m going to change some colors around and add a new header image at the top there. I may even do more changes beyond that in the future, depends on what random whims control my destiny.

For now, say hello to my own original blog mascot! All my pinks are especially tickled that I now have my own Henchman-4-Hire!

Everybody here reads Cracked, right? I love that site. Best way to get through the day.

They raise some good points. Personally, I think I’m down with the corporate job over the beachfront resort. I’ve never been much of a beach guy. Though if I was going to hench, I’d want a gig where I got my own costume and weaponry and cool stuff like that. It’s not about the money, it’s about love of the job.

While the boss is away: One hench-person’s top six video game themes

Thank God.  I thought he’d never leave.
Until the boss returns, this site belongs to the henchmen.  Viva la revolution!

Now that we have some time to ourselves, I thought I’d rate for you my arbitrarily-numbered favourite themes from video games.  Just in case you’ve missed out on the past 20 years of video game development, they’re as much a musical experience as they are visual and tactile.  For many gamers, the music of video games has stayed with us long after the games themselves have found their way onto a lonely shelf.  Let’s take a look back, shall we?

It’s not always style or beauty in the music itself that captivates us.  This song, playful and upbeat, represents an entire generation of gamers from the very start of the home console.

This isn’t the first time the Tetris theme has made it onto this blog, and for good reason.  This theme echos the methodical approach to Tetris’s gameplay, and at times the frantic rush that comes with the more difficult stages.

END_OF_DOCUMENT_TOKEN_TO_BE_REPLACED

TV is Finally Looking to Me for Ideas

Being the Internet’s foremost authority on henchmen, I can only assume that NBC was checking out my blog when they got the idea to start production on a TV show called Hench. Deadline may say that it’s based on an old Adam Beechen comic book, but I’d like to think I know otherwise. Seriously, though, NBC is working on a TV show about henchmen!

The greatest resource known to super-villains

I have long since recognized the fictional opportunities presented by henchmen. They’re just such an untapped market. They appear everywhere, but are always treated as just henchmen. There’s a lot of storytelling potential when looking into the minds of what makes these guys tick, and what they get up to in their daily lives.

The show is described thusly:

A regular guy who, in order to support his family, gets jobs temping for super villains.

That sounds kind of neat. So it sounds like we’ll be seeing multiple super-villains, that could be cool. I like that studio execs are thinking outside the box. They tried to make a straight up superhero TV show – The Cape – but that bombed spectacularly. So now they’re looking into the fringes of this popular genre.

I will do my best to keep everyone informed of this show’s progress. For example, if we ever hear anything ever again about this show, I’ll let you know.

Today is a very special day in blogging! I want to introduce you all to my first Super Fan, Lais Campos Reis. I’ve been nothing but amazed and incredibly pleased at the fans I’ve managed to attract to this blog. There have been some great people visiting and commenting and reading my articles. It’s such a delight. But Lais, a young Brazlian girl, has gone the extra step of drawing my first ever fan art!

The most adorable Henchman ever

As I’ve explained elsewhere, I don’t own the fun Henchman character I have at the top of my page. But Lais has drawn a fantastic likeness. She said I could share it with everyone, so feast your eyes!

And everyone give Lais a round of applause for sheer awesomeness.