Hello, my name is Sean Ian Mills, and I am a self-proclaimed geek, nerd, dork and all of the above. Somehow, through the magic of the Internet, you have stumbled upon my blog. Good for you. You are now at least 20% cooler than everyone else in your life. I am the Henchman-4-Hire, and this is my own little corner of these Internets, where I blather on about comic books, movies, video games, superheroes and anything else that crosses my wee little mind.

I also do birthdays.

For years, I have secretly surfed the Internet when my boss isn’t looking. But with this blog, I’ve stopped being a lurker and have become a writer! It’s my life’s passion, after all. Not only am I a newspaper reporter by trade, but I someday hope to catch my big break and get my comic book published. Or my novel. Or my screen play. Or that pokemon fan fiction I wrote when I was in high school. So if any of you reading this are big-time publishing executives or magic wish-granting leprechauns, let me know. We should do business.

Now that you’re here, feel free to take a look around. I try to update daily, whether with breaking news, editorial rants or reviews of some variety. Every Saturday is my weekly Hench-Sized Comic Book Reviews round-up, where I take a look at the various comics I picked up that week. And every Wednesday is the List of Six!

So why the name ‘Henchman-4-Hire’? I love henchmen. I love minions, sidekicks, extras, bit players and the extra fifth wheels. It’s just a personal taste of mine. Whenever it comes to choosing my favorite character in a comic or TV show, it’s rarely the main star. I like Robin over Batman; Inferno the fire truck over Optimus Prime; Multiple Man over Wolverine; and the Green Ranger over the Red Ranger. (But then everybody already knows that the Green Ranger was the best!)

I also love the idea of turning the seemingly boring background players into stars. Who cares about James Bond when you could tell the story of the villainous grunt who’s operating the control booth at the latest super-villain hideout? Bring on the red shirts and the spear carriers! I want to represent the working-class stiffs of the super-villain world! Which is why Henchman 21 from The Venture Bros. is my Comic-Con costume of choice! 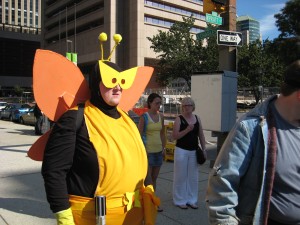 I’m the one on the left.

All of the Henchman-4-Hire artwork is drawn by artist Gemma Moody. She designed the circular logo and the mascot, Henchie! She’s fantastic and, I believe, available for commissions.