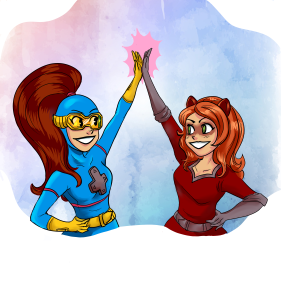 END_OF_DOCUMENT_TOKEN_TO_BE_REPLACED

Hey guys, the Gauntlet is back!

Being the enormous comic book geek that I am, I happen to fall in love with a lot of random, obscure characters that pop up through ongoing series. Sometimes they’re just background nonsense. Sometimes they’re an awesome supporting character that doesn’t get brought along when the creative team changes. When that is the case, I started this Forgotten Characters article series to highlight some of my favorites that disappeared over the years.

Well now I’m pleased to report that one of those Forgotten Characters has returned!

His gauntlet is looking funkier than ever

The Gauntlet has reappeared in the newest issue of Tony Stark – Iron Man! This makes perfect sense, considering the Gauntlet’s creator, Dan Slott, is the new writer for Iron Man!

Join me after the jump for all the awesome details!

END_OF_DOCUMENT_TOKEN_TO_BE_REPLACED

This was a really fortunate week for comics! A ton of comics came out that I like to read, and since I had Wednesday off from work, I had plenty of time to sit and read a whole bunch! This is a jam-packed review column!

We’ve got some pretty stellar issues of Amazing Spider-Man, Justice League and especially Runaways, with some middlingly OK issues of Batman, Avengers and Man of Steel. The standout for the week — and Comic Book of the Week — is the first issue of Dan Slott’s Tony Stark – Iron Man. It was a fun introduction to Slott’s new series.

The future of Iron Man is tiny

Meanwhile, I finished all of Gwenpool, and it was really nice, with an especially powerful ending. Totally worth buying all those books. Now I can’t wait to see her in West Coast Avengers, and I’m even considering buying her action figure, just to have a memento. She’s a really fun character.

END_OF_DOCUMENT_TOKEN_TO_BE_REPLACED

I don’t know if anybody has made this comparison before, but I spotted it immediately when Blizzard announced their new Overwatch character, Doomfist. A tough, bald black guy with a giant, mechanical right arm? Isn’t that exactly like Marvel Comics character The Gauntlet?

I don’t know what point I’m trying to make here, just pointing out what is clearly an obvious rip-off. I don’t think Blizzard intentionally ripped off the Gauntlet, but the coincidence is really, really odd. The mechanical fist is even on the same arm!

Granted, Gauntlet only existed for a short period of time in the wake of the original Civil War comic. He was created by Dan Slott and was actually part of a really nifty gimmick, where Gauntlet had the right-armed gauntlet, and another Slott character, Southpaw, had the left-armed gauntlet — but they never appeared together! Gauntlet was involved in The Initiative comics, and Southpaw showed up in Slott’s She-Hulk.

I did a Forgotten Characters article on the pair of them. That’s probably how I can remember Gauntlet so well.

Anyway, just wanted to point this out. If anybody knows Dan Slott, somebody tell him and see if he can raise the fuss that I can’t! Or maybe Slott is a big Overwatch fan and is now a Doomfist main because of this.

Welcome back, faithful comic book fans, for all the latest Strong Guy news! Why am I giving you news on Strong Guy, one of the most obscure and underused X-Men of all time? Because I think it’s pretty hilarious! Also, I’m a big fan.

As I’ve detailed over the past few months, the mutant Strong Guy has been making odd background appearances in a lot of Marvel Comics lately. He often just shows up, usually as part of a group, and rarely says a word. It’s like some edict went out across Marvel to just use Strong Guy in the background of stuff. As a longtime Strong Guy fan, I found this rather neat. It’s the most action he’s ever gotten outside of X-Factor.

And this week, we have a super neat appearance! For some reason, the Strong Guy Edict has reached the Spider-Man office! Behold, Amazing Spider-Man #30!

Guess which of these blue mutants bows down to Doc Ock?

That’s Strong Guy joining a couple other X-Men to try and defend Horizon Labs from Superior Octopus at the start of Secret Empire! Strong Guy vs. Doc Ock? Cool! 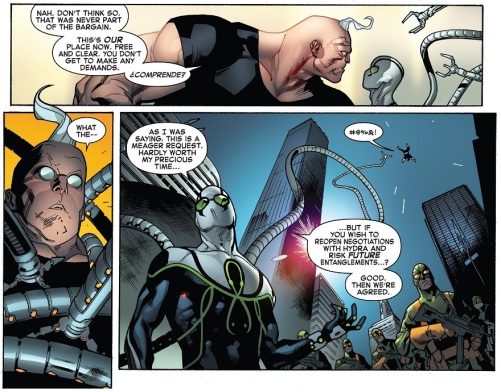 And guess which one stands up for what’s right!

Now, as we all know, and as surely Amazing Spider-Man writer Dan Slott knows, Strong Guy’s mutant powers are based on absorbing kinetic energy and transforming it into crazy musculature. So when Strong Guy lands, his body is going to absorb a metric ton of energy and likely blow up his body to a crazy degree!

And as we know from Strong Guy’s past, that sort of thing can be pretty traumatic.

Perhaps that is the origin of his Secret Empire beard? Is it a trauma beard?