The pivotal moment comes when Mosaic uses his powers to infiltrate the X-Men, take control of Magneto and learn the truth behind their war with the Inhumans. Then he hijacks Young Cyclops and makes his escape, reuniting with the other new Inhumans to pass along the intelligence he’s gleaned. And here’s where things get interesting.

Turns out, not all of the Inhumans know why they’re fighting.

It’s been 8 months since everybody learned that the Terrigen Mist was killing mutants. They know this. But did they know that Beast was working on a cure? And that he didn’t find one?

I checked the first issue of the crossover and discovered that what Mosaic is telling the rest of the team is correct: none of the Inhumans knew that the Terrigen Mist was about to saturate the entire globe. Beasts said he went to the X-Men with that information first, and then they detained him before he could go warn the Inhumans of their impending attack.

So in this whole conflict, the Inhumans don’t know that the Terrigen Mist poison has almost reached its saturation point.

On the one hand, this makes the Inhumans a little more sympathetic in this conflict. On the other hand, they have known that the Mist kills mutants all this time and they have refused to allow the X-Men to stop it. So yeah, Inhumans are still religious fantatics, but they don’t know the whole story or the exact impetus of the X-Men’s attack.

And when Mosaic tells the other new Inhumans, they don’t take it very well. 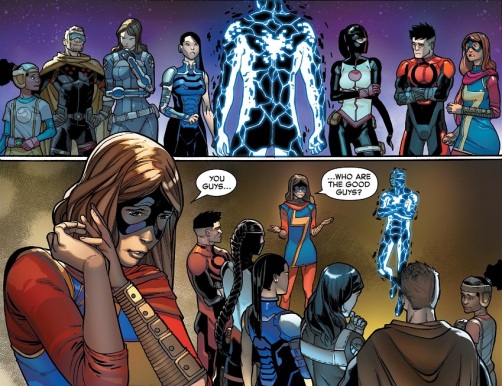 I would definitely consider this an interesting development.

Of course, Marvel might just be setting up the Inhumans for a get-out-of-jail free card, a couple of them, actually. When the rest of the Inhumans find out the reason for the X-Men’s attack, are they all going to change their minds and say, “Whoa dudes, if that’s the case, you can totally destroy the cloud. You should have just come to us in the first place.”? And then maybe yell at Emma Frost for creating that Cyclops mirage?

That way, both sides will come off as good guys and Emma can take the blame for everything. Ignore the fact that the Inhumans fully believed they were killing Cyclops, and ignore the fact that they refused to let the X-Men destroy the cloud even though everybody knew it was killing mutants. Emma Frost lied about Cyclops, so she’s to blame for everything! That’s my prediction in all of this! But my predictions are usually wrong.

Now then, on to the real meat and potatoes of this article: I don’t think the memo got around about how Mosaic’s powers work.

Based on his ongoing series, when Mosaic jumps into somebody’s body, he gets a big multi-screen control center to operate in. This gives him access to his host’s memories and thoughts. From here, he can control the body. While he’s inside, the other person is shown curled up in the fetal position inside this memory control center. They don’t talk or anything, they just lie there.

When he’s done, he just jumps into another body and gets their control center. And from the evidence we’ve seen, including the new issue of Inhumans vs. X-Men, it seems that the hosts are perfectly fine after Mosaic leaves their bodies.

Here’s what happens to Magneto immediately after Mosaic leaves his body.

He’s back on his feet and perfectly fine

One time, when he possessed Spider-Man, Spidey’s mind was able to create a whole bunch of mental anti-bodies to try and force Mosaic out of his mind. This was possibly because Spider-Man is used to having people in his mind, and he had defenses. Mosaic had to physically fight these antibodies inside the memory control center.

He’s not called ‘Amazing’ for nothing

My point is, that’s not the real Spider-Man. That’s not his fetal position self taking arms against Mosaic. It’s some kind of mental defense system.

So where am I going with this? Well, Mosaic’s takeover of Young Cyclops is a big deal for the latter character’s growth. In last week’s All-New X-Men #18 — the same issue where Young Cyclops revealed he’s an idiot — we get a completely warped use of Mosaic’s powers.

First of all, Young Cyclops is not only awake inside the memory control center, but he’s able to walk around, converse with Mosaic and even view the memories of past hosts.

This also raises questions of how exactly Mosaic controls people. I thought he possessed them completely and simply was them. But this scene implies that he stays in the control center and controls people like an RC car

Cyclops also jumps through Mosaic’s body, so clearly this isn’t some kind of Cyclops antibody.

Cyclops takes a look at Magneto’s memories and realizes that Emma Frost used a mental protection of Old Cyclops to get the X-Men to destroy the first Terrigen Mist cloud. Cyclops is pissed off about this, because it means that the big, ‘evil’ act that the world hates Cyclops for was actually committed by Emma Frost.

(Not that this changes the fact that Medusa and Black Bolt openly murdered someone that they fully believed was the real Cyclops.)

So Young Cyclops is angry at Emma, and no doubt this revelation is going to bring down the entirety of Inhumans vs. X-Men. But Cyclops can’t just rush off and tell the other X-Men, because apparently, Mosaic’s hosts need 12 hours to recover from their possession.

Also, how can Mosaic still be speaking to him if he’s jump out of Cyclops’ body?

That’s not how it was with Magneto.

Here we have a brand new character, Mosaic, who Marvel deemed worthy enough to get his own ongoing series. And it can’t be a coincidence that Mosaic debuted ahead of Inhumans vs. X-Men. No doubt Marvel wanted to use him in this series. His powers are strange, I’ll grant them that, but apparently Marvel can’t get them ironed out in time for the big Inhumans crossover, for which he was likely created in the first place.

It wouldn’t be such a big deal if Young Cyclops’ story arc didn’t hinge entirely on getting Mosaic’s powers wrong.

And again, I kid because I love.

No new updates to the Strong Guy Watch. He didn’t make any appearance in Inhumans vs. X-Men #4. But speaking of strong guys, Colossus gets a couple badass moments.

He should keep the beard

So at least that’s something.