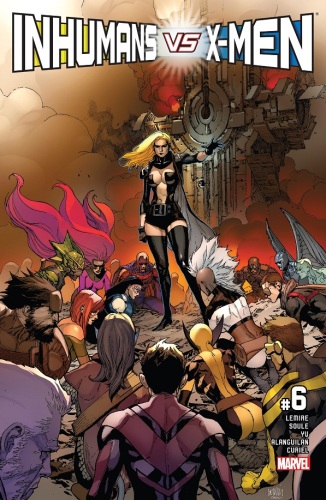 END_OF_DOCUMENT_TOKEN_TO_BE_REPLACED

Where Everything Goes Topsy Turvy and Marvel Acknowledges Our Concerns

The Inhumans vs. X-Men end game is upon us, and in the penultimate issue, Marvel acknowledges our anti-Cyclops concerns, Young Cyclops gets put in his place and everybody is positioned for maximum character-defining results. The Nuhumans get to be the good guys and Emma Frost is set up to be the fall guy. Seems pretty simple to me. 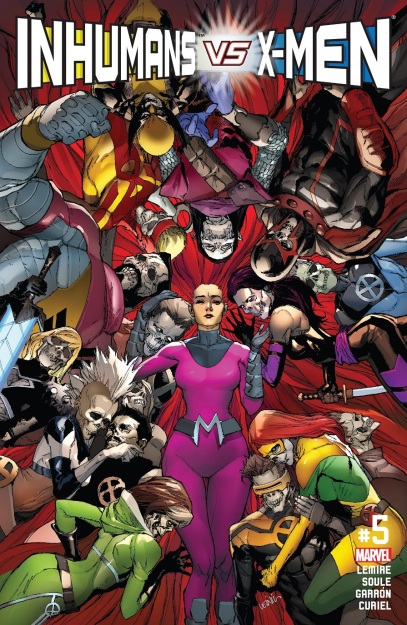 In my ongoing coverage of Marvel’s wackadoo treatment of the X-Men, I’ve been pretty flabbergasted at the writing. But thankfully, it seems that Marvel has some idea of what they’re doing. And while the upcoming climax has yet to completely redeem the story so far, and while this sucks for poor Emma Frost, Inhumans vs. X-Men #5 still does a couple things right that I thought I’d share.

As for the Strong Guy Watch, this will be the third week in a row without a real update! It seems he has disappeared from the story as quietly as he appeared. Godspeed, Guido.

Join me after the jump for full coverage! And SPOILERS for Inhumans vs. X-Men #5, obviously.

END_OF_DOCUMENT_TOKEN_TO_BE_REPLACED

It’s Hail Mary pass time in the world of X-Men fighting Inhumans, people. It seems that Marvel has realized that something went wrong in their plan to vilify Cyclops, so they are going to dig in their heels and just shoot for the moon on this one. Do Cyclops’ actions from Death of X not make any sense in connection with Marvel’s recent portrayal of the character? Well too bad, because he’s totally a terrorist, you guys. For sure!

Don’t believe me? Wait until you see what Young Cyclops has to say in the pages of All-New X-Men this week! 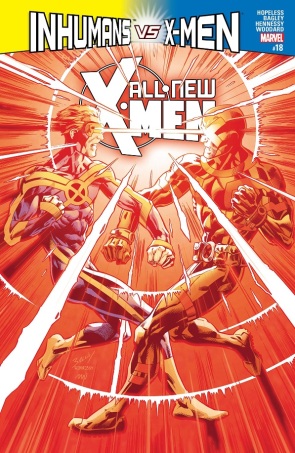 Only one of these Cyclopses is right

This is a topic I’ve written about a lot before, and I think I’m going to make it an ongoing subject, at least through Inhumans vs. X-Men. It’s just weird to see Marvel twist themselves into knots on this subject! It’s like the right hand and left hand have no idea what the other is doing, but both of them dislike Cyclops!

Join me after the jump for all the ridiculous details. Also! Update on Strong Guy Watch!

END_OF_DOCUMENT_TOKEN_TO_BE_REPLACED

The Strong Guy Story That Nobody Is Telling

I am a big fan of the X-Men character Strong Guy, and I’ve noticed something kind of cool and quiet happening with him in the ongoing Inhumans vs. X-Men saga. I don’t think it’s been remarked upon anywhere else, so I thought I’d take a moment and just point it out, for any other fans.

Basically, a quiet little Strong Guy story is taking place in the background of Inhumans vs. X-Men, and it feels kinda meaningful. 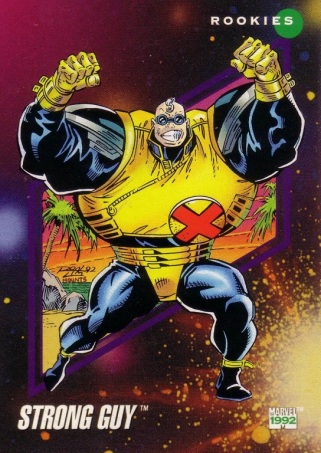 This takes me back

Strong Guy is Guido Carosella, a mutant whose power is to absorb any impact to make himself stronger and more muscular. He’s a bit of a comedian — hence a name like ‘Strong Guy’ — and he’s got that very iconic look. He’s big and bulgy, because of his powers, and he likes to wear weird little glasses and have a single shock of white hair. The guy is a card.

He’s also never been a particularly prominent mutant. Strong Guy has never been a member of the X-Men, and mostly hangs out in the margins on teams like X-Factor. He’s not an important or noteworthy character by any means, is what I’m trying to say. It works for him.

Quite recently, at the start of the whole conflict between mutants and Inhumans, Jamie Madrox the Multiple Man was killed by the Terrigen Mist in the first issue of Death of X. 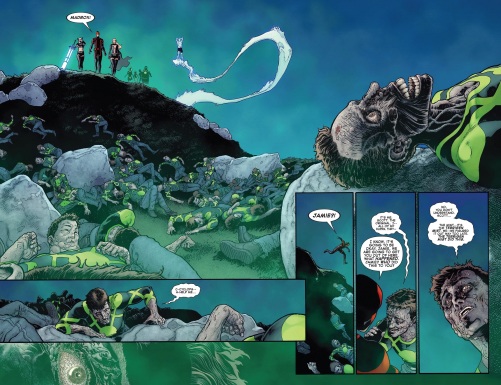 Strong Guy hasn’t been in any comics for several years now, especially not in any X-Men comics. But in the second issue of Death of X, when the X-Men hold a funeral for Madrox, someone at the X-Office at Marvel Comics remembered to have Strong Guy show up to pay his respects. 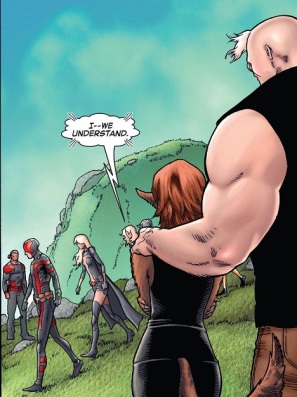 Makes sense. Of course Strong Guy would be there. But he doesn’t get any lines. Nobody talks to him or even mentions that he’s there. It’s just a nice little background detail.

Flash forward to the new Big Event series, Inhumans vs. X-Men. Because of the dangers of the Terrigen Mist, the X-Men are in a big superhero brawl with the Inhumans. At the end of the first issue of Inhumans vs. X-Men, there’s a big splash page of X-Men launching a massive, head-on attack against the Inhumans.

And who should appear in the background of this big splash page? Strong Guy. 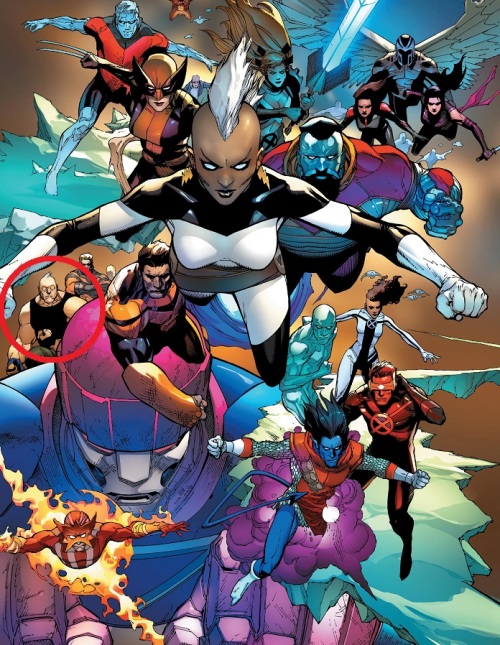 There, on the left

Unfortunately, he doesn’t get a scene in the follow up fight. And again, nobody mentions that he’s there. Maybe he’ll show up again somewhere else in the event. I don’t know.

But all that aside, I’m rather touched at what must have happened here behind the scenes in continuity. Think about it. Strong Guy isn’t a member of the X-Men, and he definitely isn’t part of any  of the X-teams that have come together against the Inhumans. He’s just not active in comics right now.

So when his best friend died, someone in the X-Men had the forethought to reach out to Guido to let him know the tragic news. Guido then made the trip to Muir Island so he could help bury his friend and grieve with others.

Then eight months pass, during which Strong Guy does not use his visit to Muir Island to join any of the X-Teams. Have we seen him show up in any of the X-books in the past year? I haven’t been following them too closely. Does anybody know if he showed up in the background or anything?

Either way, at some point somebody must have reached out to Guido again to let him know that the X-Men were going after the Inhumans. Maybe they wanted his strength to help out. Who knows. But at some point, Guido decided that he wanted in on the attack. And the X-Men let him come along. Maybe he wanted revenge against the Inhumans or some kind of justice.

Just think about what this means for the character. And nobody is telling that story, at least not directly. It’s all being told in random background sightings.

Marvel isn’t paying much attention to Multiple Man’s death. HIs name gets dropped whenever the X-Men mention that he was killed by M-Pox, but his death is not a major part of the story. He was clearly picked as cannon fodder to make M-Pox seem more severe. It happens all the time in comics. Anybody could have been chosen, and Marvel just happened to go with this random, popular and unused character.

But rather than let it go completely unremarked upon, someone somewhere is telling this story about Multiple Man’s best friend and his grieving process. I don’t know if it’s an editor, an artist or the writers of Inhumans vs. X-Men themselves.

Somewhere, between the lines of the big Inhumans vs. X-Men conflict, is the story of a man who lost his best friend, and who now wants a chance to stick it to the people who caused his death. I just think it’s a neat detail.

I’ll let you know if he does anything else during the crossover. Consider me on Strong Guy Watch.