Strong Guy Watch: He Made It To the Wedding!

Strong Guy made it to the wedding of Colossus and Shadowcat! X-Men Gold #30 came out this week, the highly celebrated wedding issue. Strong Guy was prominent on the cover, and considering his risky business over in New Mutants, I was a little worried for him.

But he’s still alive and he made it to the wedding!

Is that the bride’s side or the groom’s side?

That’s his only appearance, his only panel. But he got a seat in the back, is wearing a nice suit and I’m sure he went to all the nice parties. So it’s not that big of a deal, but this is Strong Guy Watch and we watch for Strong Guy wherever he might be! He’s doing great in New Mutants right now, where they mentioned that he got his soul back! Good for him.

And remember, next week is the first issue of Multiple Man! Maybe he’ll show up in that too.

No spoilers for the actual wedding issue. Just know that Kelly Thompson will be writing more X-Men and I’m very, very excited about that!

Strong Guy keeps getting invited to X-Men weddings. This is a minor update to my Strong Guy Watch because I saw that he gets a pretty prominent place on X-Men Gold #30, the big issue that will feature the wedding of Colossus and Kitty Pryde. How lucky for him that he gets to be a random background X-Man at such an auspicious occasion! 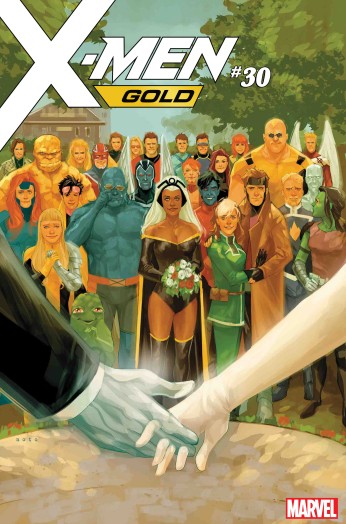 I’m glad that someone at Marvel remembered how great a visual Strong Guy is in crowd scenes.

I want somebody to write a day-in-the-life of Strong Guy short story at Marvel. What does this guy get up to? He’s not a member of any of the active X-Men squads, yet he’s always in team shots these days. Is he a teacher at the new school? Does he have a separate life and just gets called in for big X-Men events? It’s fascinating!

This is actually Strong Guy’s second X-Men wedding. He was invited to Scott and Jean’s wedding back in the 1990s, too!

Like I said, he keeps getting invited to X-Men weddings. I think it’s neat.

Though he didn’t get invited to Northstar’s wedding. Maybe he wasn’t a very prominent character back then.

END_OF_DOCUMENT_TOKEN_TO_BE_REPLACED

New X-Force, Because Why Not?

I thought about complaining how team comics never last long enough for their membership to really gel, to really come together as a solid cast of characters with relationships and friendships and drama. But then I realized that my favorite comic, X-Factor, has done just that over the past 5+ years. So moot point.

The real point is that there’s going to be a new X-Force in Marvel NOW! Marvel is ditching the Wolverine-led black ops team angle and going with Cable and friends on the run as some kind of fugitives. And now we know Colossus comes out OK from Avengers vs. X-Men.

Which one is Keyser Soze?

So we’ve got Cable, Domino, Colossus, Forge and Doctor Nemesis…who is looking a little worse for wear. What the hell have they done to Nemesis? They do know he’s supposed to be this 100+-year-old scientist/curmudgeon, right? Now he looks like an anime character. Still, it’s nice to see Forge back in action, and I like the orange/silver/gray look they’e got going on.

The premise sounds cool too: they’re going to be wanted fugitives for a reason we don’t yet know, on the run from more prominent heroes. That could be a pretty cool storyline. It’s also going to be drawn by Salvador Larocca, a favorite artist of mine.

But then we come to the big problem: It’s going to be written by Dennis Hopeless. He gave an interview about the series here.

Now I have never read anything that Hopeless has done. I don’t know what kind of writer he is, or how good his comics might be. But I do know that he is also the writer behind Avengers Arena, the comic that’s going to be about killing fan favorite characters as wantonly and as indiscriminately as possible. And any writer who brags about how his comic is going to feature deaths already gets a black mark in my book.

But we’ll see. I think I might check out this new Cable and X-Force series.