Huzzah and hooray! We have new comics from places I like again! The industry is not yet back to full speed, but I’ll take what I can get these days. You’d be surprised what I’ve ended up watching to support my movie review podcast. What’s that? You haven’t listened to my movie review podcast yet? Well, shucks.

Anyway, enough of that self-plugging, let’s talk comics! This week saw the release of new issues of Go Go Power Rangers and Marauders, both comics I very much enjoy. Of the two, I think I liked them both equally. Both were solid comics. But let’s give Marauders the spotlight this week because it’s good to have X-Men comics back!

Meanwhile, life continues as expected in these quarantine times. The world continues to spiral out of control. Racial unrest has reared it’s ugly head again. And I finally got around to watching the second season of Infinity Train from Cartoon Network. Good stuff! Now I’m checking out Space Force on Netflix.

END_OF_DOCUMENT_TOKEN_TO_BE_REPLACED

Ugh, what a crummy week. I came down with a cold out of nowhere and just wasn’t feeling very jazzercised to read through a stack of comics. I did make it through some, like Batman, Ms. Marvel and even Marauders! But my thoughts on this week’s comics are probably muddled from the cold.

Comic Book of the Week goes to Doctor Doom #6 because it’s an issue where Doctor Doom and Kang the Conqueror, both in full regalia, go on a cross-country road trip and shoot the breeze about a lot of fun topics.

Meanwhile, I finally read Spider-Man: Life Story and it was good. I wasn’t blown away, but the story had a lot of really good ideas, and it handled the main plot of Peter Parker aging really well. Solid idea, solid execution, but nothing that’s going to really stick with me in the long run.

Also, I’m only now learning I missed out on Strange Adventures #1! Ugh. I wasn’t even paying attention to when it actually came out. I’ll have to grab it for next week.

END_OF_DOCUMENT_TOKEN_TO_BE_REPLACED

Welcome to my random page of comic book reviews! I do this every weekend, because I love comics and I love stories. This week I look into new issues of Batman, Marauders, New Mutants and more!

Comic Book of the Week goes to Wonder Twins #12, the wrap-up to my favorite comic series of the past year! This was such a wonderful series, and Mark Russell and Stephen Byrne stick the landing with class and heart.

Meanwhile, I checked out the first issue of the new Wolverine series but have decided not to do a review. It’s a triple-sized beast of a comic and it’s fine, but my review would mostly be summed up as, “Yeah, these are some fine Wolverine stories.” Nothing really blew the lid off the place in Wolverine #1, unless you count this possible reveal of a new Multiple Man costume! I feel like this should be bigger news across the comic book media landscape.

END_OF_DOCUMENT_TOKEN_TO_BE_REPLACED

It’s Birds of Prey weekend! I was trapped in a snowstorm yesterday, so I haven’t seen the film yet, but it’s definitely on my docket for this weekend! And I’ll have my review/thoughts at the usual place on Wednesday! Too bad I didn’t read any Birds of Prey-related comics…

But I did enjoy new issues of Marauders, Lois Lane and Batman! So at least that’s something. Comic Book of the Week goes to the stellar debut of Zeb Wells’ new Ant-Man mini-series! Hilarious and fun all in one!

Ant-Man is friends to everyone!

Meanwhile, the big X-Men/Fantastic Four Dawn of X crossover kicked off this week and it was fine. The X-Men really come off as jerks…and then the Fantastic Four kind of comic off as jerks. It’s not a good showing for anybody. I feel like the X-Men could handle superhero diplomacy a little better if they really want to solidify their new status quo.

END_OF_DOCUMENT_TOKEN_TO_BE_REPLACED

Jumbo Carnation is Everything I Love About X-Men Comics

Jumbo Carnation is alive again! This is a great day for X-Men comics and mutants in general. And it’s a good representation of everything I want to see in Dawn of X and X-Men comics. The four-armed mutant made a proper return as Emma Frost’s personal fashion designer on Krakoa in this week’s issue of Marauders.

For those of you who don’t know, Jumbo Carnation debuted at the start of Grant Morrison’s run on New X-Men back in the day, as part of Morrison’s whole revitalization agenda. Morrison did a lot of things for the X-Men, but my personal favorite was making mutants normal. Morrison created Mutant Town, a whole district of New York City where ordinary and average mutants lived and worked.

And among its residents was this four-armed mutant fashion designer, who designed clothes specifically for the weird bodies of mutants.

Some fashion maven. He’s wearing the same outfit he had on when he died nearly 20 years ago.

Then he died from a drug overdose in the exact same pages where he first appeared, and his death kicked off a whole storyline for the X-Men. But I never forgot Jumbo Carnation — how could I, with a name like that.

I’ll admit, I wasn’t a big fan of Morrison’s X-Men comics right away. But over time I matured and understood it all better. And one thing I have come to truly love about X-Men comics — and possibly Dawn of X going forward — is that mutants don’t have to be superheroes. The whole point of mutants is that they’re people. They are ordinary people. It’s just that Professor X and Magneto and whoever else decided to recruit some and put them into costumes to fight crime and/or each other.

But when the mutants as minority metaphor really gets going, especially when Morrison was the writer, the best look for the species is to see them as normal people.

A mutant doesn’t have to be a superhero. A mutant can be a fashion designer. 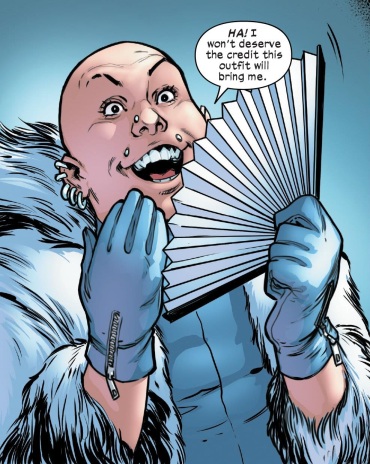 A mutant can be anything they want to be

So I am rather thrilled that Dawn of X has seen fit to reach into that one weird, random appearance back in the day and bring back Jumbo Carnation to the land of the living. The world needs mutant fashion designers now more than ever.