Comic Book of the Week goes to Marauders #12 for a big Kate Pryde moment. Also, I love how her hair is drawn.

Meanwhile, The Magnificent Ms. Marvel returned and I looked into it…but it’s a tie-in to the Outlawed storyline going on in Champions. I haven’t read it and didn’t plan on it, so I’m skipping the new Ms. Marvel issue. Man…I just can’t work up any interest in these comic company Big Events anymore. I must be getting old.

END_OF_DOCUMENT_TOKEN_TO_BE_REPLACED

Have you seen the trailer yet for Captain Marvel? What about Avengers: Endgame? Or the new Spider-Man: Far From Home trailer? Is that not out yet? This week was crazy with Marvel movie trailers! Almost like it’s Christmas!

We’ve got some solid Marvel comics this week, too! Like Uncanny X-Men and West Coast Avengers! But DC wins Comic Book of the Week with the second issue of Grant Morrison’s The Green Lantern! 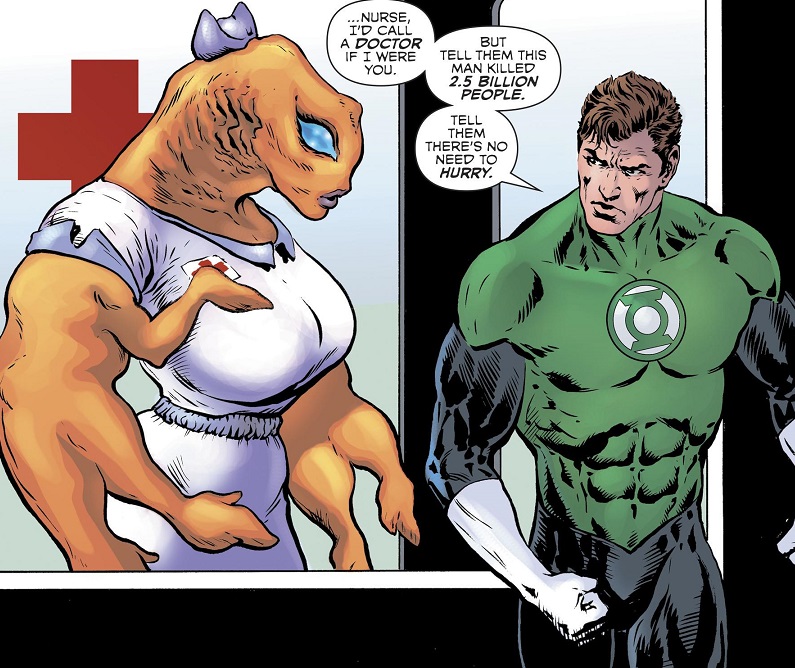 He doesn’t do things by the book!

Meanwhile, take a second to go watch those trailers again. They’re pretty great! Then come back here and read the rest of my reviews.

END_OF_DOCUMENT_TOKEN_TO_BE_REPLACED

If anybody is curious what to get me for Christmas, I will gladly accept an infinite number of official Multiple Man action figures. We now live in a world where they exist, and I need to embrace and celebrate that fact.

Other than that, pretty solid batch of comics this week! Batman, Runaways and X-23 deliver the goods, like usual, but the battle for best comic came down to a delightfully fun Iceman — featuring the first in-canon team up of Spider-Man and his Amazing Friends — and the mind-warpingly terrific first issue of Grant Morrison’s The Green Lantern. I gave Comic Book of the Week to GL because it’s just slightly more momentous.

Meanwhile, is anybody watching that Titans TV show? I don’t have the DC Streaming Service thing, but I might check it out if anybody has good things to say about Titans. Having a legitimate live action Robin storyline is not something I can pass up.

END_OF_DOCUMENT_TOKEN_TO_BE_REPLACED

I am very excited for live action Robin on the new TV show Titans. So I’m also very excited to see this thing for myself. Well the first trailer has arrived to kick off San Diego Comic-Con, and it’s dark and brutal as all hell!

It’s like…how do we go for the complete opposite of Teen Titans Go! on every conceivable level? I think it’s a bold choice, and not one I’m very confident that DC can pull off.

But hey, it’s a serious, live action Robin, so you better believe I’m going to give it a chance! This sort of thing only comes around once in a generation! Hopefully DC doesn’t screw it up like they did with Chris O’Donnell.

Also in SDCC news from DC Comics, Grant Morrison is coming back to write a police procedural Green Lantern comic, and I near about blew my lid! That is, like, everything I could possibly want from Green Lantern comics. I’m really excited about this one!

Whatever happened to holiday theme comics? Next week is Halloween, but I don’t know if there are any Halloween comics coming out! Whatever happened to those great comics about fighting giant pumpkin monsters? Or meeting demonic hell spirits? Or what about the greatest Halloween superhero adventure of all time? You henchies remember that one, right? Whatever the case may be, there isn’t nary a Halloween reference in any of this week’s haul!

But we’ve still got a pretty good haul. I picked up new issues of Aquaman and Harley Quinn, while also checking in with the ongoing craziness happening in Axis and Multiversity. One is a little more crazy than the other. I also picked up the first issue of the new Arkham Manor series…but I doubt I’ll be picking up any more. Fortunately, the latest issue in Jonathan Hickman’s ongoing Avengers saga is amazing! Avengers #37 easily scoops of Comic Book of the Week for the high quality, character-based drama!

Some day they’ll laugh about this

You can also check out my coverage of the soon-to-be cancelled She-Hulk over at Word of the Nerd. That title should have survived for the Matt Rocks cameo alone!