END_OF_DOCUMENT_TOKEN_TO_BE_REPLACED

Bad news, everybody! The final issue of Extermination has been delayed until December, so I’m going to be kept in limbo for the rest of the freakin’ year as to whether or not Mimic survives. Oh, and I guess we’re technically stuck with the Young X-Men still being around too.

Light week for new comics, I’m afraid. The ongoing Superman and Spider-Man comics aren’t anything special, and the new Power Rangers direction is an immediate bust. I gave Comic Book of the Week to the first issue of Tom King’s Heroes in Crisis, though considering the crimes he commits, I need to stop gushing over the guy. 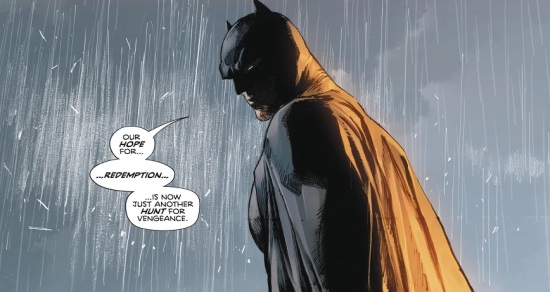 Meanwhile, did you hear that Eddie Brock is wearing a new symbiote these days? That the Venom symbiote gave birth to some new symbiote? Do we really not have enough of those?

END_OF_DOCUMENT_TOKEN_TO_BE_REPLACED

The one constant in the world of superheroes is the colorful costume. Tights, spandex, latex, long johns, leather, pajamas; all superheroes play dress up when it comes to fighting crime. It’s just more fun that way. But in the real world, everybody knows that a big, muscular guy in spandex just looks silly. If a real world Batman was just wearing a pair of gray tights, he’d be no more threatening than a ballerina. Why do you think the movies put Batman in a specialized suit of black armor, or the X-Men wear black leather?

Tights and spandex costumes just aren’t cool, no matter how good they might look when drawn.

Which is why, throughout the history of comics, creators have often tried to upgrade a superhero’s costume to make it look more badass. For some reason, this meant changing from spandex to armor, with heavy layers of complicated plating and protection. Yet no matter how good the creators’ intentions, somehow these upgrades looked even worse!  These armor costumes were running rampant in the 90s, and in hindsight, everybody agrees that they looked ridiculous. Superheroes have gone back to tight spandex ever since.

I thought I’d share with everybody some of the more ridiculous armored costume changes in comic book history.

END_OF_DOCUMENT_TOKEN_TO_BE_REPLACED

DC superhero extraordinaire, Booster Gold, might just be getting his own TV show on the Syfy Network! At least according to The Hollywood Reporter, which I’m pretty sure is a credible news source. Much more credible than I am, at least. They actually pay their writers. Anyway, development is only at the stage where Syfy has ordered a pilot script. And we all know how well that worked out for the Wonder Woman TV show at NBC. I’ve yet to see that pilot, though I still really want to.

Still, legitimate superheroes getting to the pilot stage is good news as far as I’m concerned.

Booster is pretty thrilled too

According to the article, NBCUniversal, which I guess owns Syfy, ordered the one-hour pilot script from Greg Berlanti, of No Ordinary Family and Green Lantern, and Andrew Kreisberg, of Fringe. So…good? I don’t know, I’m not sure how all this TV business works. Again, the Wonder Woman pilot didn’t get picked up, so who’s to say this one will be any better?

I’m at least hopeful. I’ll try to follow any of the news that comes out about this pilot.

Booster Gold is a failed athlete and deadbeat from the 30th century who travels back in time because he thinks he can be a pretty cool guy in the 21st century. He brings a bunch of futuristic technology with him, which is so far advanced that it seems like super powers to the people of the past. But Booster Gold isn’t interested in saving the day, he wants fame and lucrative endorsement deals. So he becomes a superhero just for the glory.

Frankly, I think that’s a brilliant premise for a TV show superhero.