Disney is apparently forging ahead with all of their upcoming movies, including Jungle Cruise with Dwayne Johnson and Emily Blunt. It’s their latest attempt to turn a theme park ride into a movie franchise…though I don’t think it looks very good.

I dunno. There’s action, sure. There’s comedy, I guess. We’ll probably get some good special effects and performances. But I don’t think this film is going to be another Pirates of the Caribbean. I think we’re looking at another Haunted Mansion.

But I could be wrong! I’ll probably go see it anyway because I get paid to go see movies now! You henchies are listening to my weekly movie review podcast, right? Right?!

Jungle Cruise comes out on July 24.

6 Characters The Rock Could Play in the Marvel Cinematic Universe

Dwayne Johnson is an international treasure. Does there exist a more charismatic and enjoyable human being on the planet? Who also has good moral values and a such a big heart? That The Rock has taken over Hollywood is just about the most delightful thing that could happen to Hollywood. And you best believe I’m going to see his new movie Rampage this weekend!

So where could Dwayne “The Rock” Johnson fit in the Marvel Cinematic Universe? 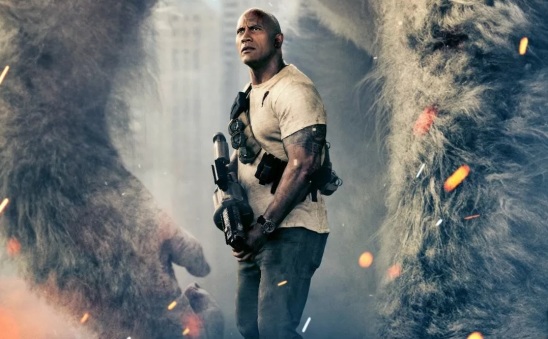 Who cares about giant gorillas, wolves and crocodiles?

Why not bring together the two best things in Hollywood? Marvel and The Rock! Yes, he’s apparently going to play Black Adam for DC Comics, but it’s not like that movie is in production or anything. And it’s not like he’s going to show up as the villain in the Shazam movie, which is in production. DC is clearly wasting whatever contract they currently have with The Rock! He should jump ship and make a real explosive entrance into the Marvel Cinematic Universe!

But who could he play? Which Marvel heroes or villains are bold enough for The Rock? Join me after the jump for some of my ideas!

END_OF_DOCUMENT_TOKEN_TO_BE_REPLACED

The Rock is Gonna be in Another Action Movie

The Rock just keeps piling on these action movies. Next up is Rampage, based on the classic video game. It looks pretty OK.

I’m sure I played Rampage at least once or twice back in the day, but I can’t imagine too many people have some huge love for the game. This is just another attempt by Hollywood to co-opt a familiar name brand and hope the Rock boosts ticket sales. Maybe he will! But hey, more power to the movie. Maybe it’ll be good.

“Now They’re Back for One Last Ride…Again!”

So I owe all you henchies an apology. I think my work has been slacking off a bit lately, and I’m just showing a lot of videos. That’s partly because I took on a part-time job, which is helping pay the bills. And also, possibly, because I just started playing The Witcher 3 recently, and man, that game is awesome! But good things are coming to this blogsville, if you’re all still reading! I’ve got big plans going forward.

But until then, here’s the Honest Trailer of the latest Faster & Furious movie, because it’s there and actually kind of funny.

I have never seen a single one of these movies, but kudos to them for not only keeping the franchise alive, but somehow turning it into a billion dollar franchise! Where’d that come from?!

The Rock to Bring Black Adam to the Screen

After weeks of teasing on social media, Dwayne ‘The Rock’ Johnson revealed to the world today that he would be playing Black Adam in the upcoming Shazam movie! And much like he did with the death of Osama bin Laden, The Rock announced the casting on Twitter.

No word yet on when the movie will actually reach the silver screen. And quite frankly, does anybody else remember how the Rock was rumored to play Black Adam several years ago? I can’t just be imagining that.

I guess with the new, enhanced superhero movie schedule, DC and Warner Bros finally had Rock sign on the dotted line.

And honestly, the Rock is the perfect choice to play Black Adam! Not to mention the fact that DC’s growing movieverse could use his charm and personality.

For those who don’t know, Black Adam is the arch-nemesis of the superhero Shazam. I don’t know how well known Shazam is to the rest of the world. Shazam is really 10-year-old Billy Batson, granted the power of the gods from an ancient mystic. Whenever Billy shouts the magic word – “Shazam!” – a magic lightning bolt turns him into the Big Red Cheese.

It makes sense in context

Shazam has been around for decades, and was once known as Captain Marvel. He’s basically a Superman rip-off who got pretty popular in his own right.

Black Adam is one of his many colorful enemies. Black Adam gets his own powers from the same ancient mystic, so he and Shazam are kind of two sides of the same coin.

And, again, the Rock is perfect for the role – should the movie ever actually get made.