Black Knight and U.S. Agent are Coming to the Marvel Cinematic Universe

There was a bunch of cool Marvel Cinematic Universe news this weekend at the D23 Disney convention. We now know that Black Panther 2 is coming out in May 2022, for example. And there were some more Eternals cast members named.

But coolest news for me is that Kit Harrington has been cast as the Black Knight in the Eternals movie, and Wyatt Russell has been cast as U.S. Agent in the Falcon and the Winter Soldier TV show!

How cool is that? 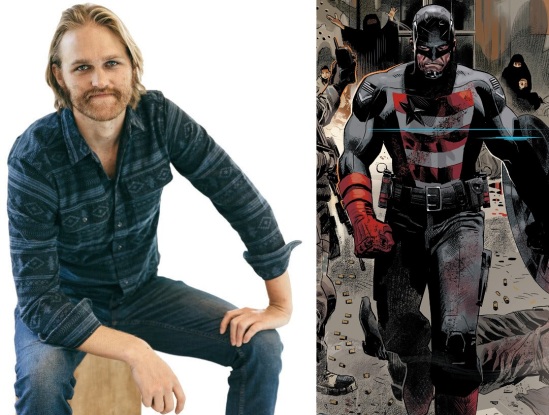 I am loving the fact that so many nifty, smaller Marvel characters are getting cast to actually appear in things. Like David Harbour as the Red Guardian in the Black Widow movie.

Black Knight is an ancient knight from King Arthur times, who wields the Ebony Blade. Harrington is playing Dane Whitman, the modern day incarnation of the Black Knight. He is a longtime Avenger in the comics, though a minor character by far. He should be cool.

For those who don’t know, the U.S. Agent was the government’s replacement Cap when Steve Rogers abandoned the role back in the 1980s. He’s more of a company man than Rogers, often going to extremes to follow orders and be a good government boy. And it makes total sense in the MCU for the government to want their own replacement Captain America, and to not just let Sam Wilson take over because Steve Rogers said it’s OK.

I hope to see U.S. Agent as a friendly antagonist, someone how is opposed to Falcon and Bucky, but is still on the side of the good guys in the bigger picture. And perhaps they all have to work together in the end to take on Baron Zemo.

The Future of Marvel Studios is Here!

Last night was the night we’ve all been waiting for! Marvel Studios held their big announcement panel at San Diego Comic-Con and Kevin Feige finally shed light on what comes next for the Marvel Cinematic Universe! I’m excited. You’re excited. How about we just run these down?

First up is confirmation of the Black Widow movie!

Black Widow is the next Marvel movie. It’s something of a prequel, I think. Should be a lot of fun. No trailer yet.

Next up is Eternals.

I don’t know much about the Eternals, either the movie or the comic. An all-star cast was announced last night, starring Salma Hayek and Angelina Jolie as the leads. There’s also the great Kumail Nanjiani and the awesome Bryan Tyree Henry, plus a bunch of others I don’t really know. The Eternals are like the Inhumans in that they’re an ancient race of super-powered people, based around the Greek Gods. Could be fun! No word on the gay lead character though.

Then we’ve got Shang-Chi and the Legends of the Ten Rings.

I’m excited for this one because it’s something new. Granted, Eternals is something new, but I don’t care about them on a deeper level. Shang-Chi could be fun. Especially since it’s going to include the Mandarin, the real one, with a possible tie-in to the Ten Rings that were first introduced all the way back in the first Iron Man. That could be some awesome lore to explore!

Also, actor Simu Liu was cast as Shang-Chi. I don’t know anything about him, but I trust Marvel and their casting. This will also, obviously, be the first Asian-led Marvel Studios movie!

The next movie is Doctor Strange in the Multiverse of Madness

This could be good! The director said they’re going for more of a horror movie this time around, which is a genre Marvel hasn’t done yet. I liked the first Doctor Strange film, enjoyed his cameos in the Infinity War films, so this could be a lot of fun.

Last we have Thor: Love and Thunder!

Director Taika Waititi is coming back for Love and Thunder, so I am very happy. Ragnarok was amazing. Chris Hemsworth is returning as Thor, but the biggest surprise of the night was Natalie Portman walking out on stage and revealing that she’ll be playing the Jane Foster version of Thor as well! That’s pretty darn cool! Glad to see that fences were mended and she decided to come back!

Also, Marvel and Tessa Thompson are going to be way more open about Valkyrie being LGBTQ, so that’s awesome.

That’s it for the movie slate, as far as was revealed. But the Marvel panel also touched on a bunch of their upcoming TV shows for the Disney+ streaming service. They confirmed The Falcon and the Winter Soldier, which will feature Baron Zemo as the villain. There’s going to be a Loki show starring the Loki that escaped with the Tesseract in Avengers: Endgame. Could be fun. WandaVision is going to focus on the Scarlet Witch after the death of the Vision, which could be nuts. She’s also going to cameo in Doctor Strange 2, and an adult Monica Rambeau has been cast to appear, so yay!

What If…? is getting a cartoon playing around with alternate takes on the Marvel movies. Sounds hilarious. And a Hawkeye TV show was confirmed for several years out, in which Jeremy Renner will be training Kate Bishop. So doubly awesome.

The last surprise of the night was announcing actor Mahershala Ali has been cast as a new Blade, possibly for a new Blade movie somewhere down the line! So if, like me, you were disappointed in how he was killed off as Cottonmouth, this is cool news!

Also, Feige announced that they are working on Guardians of the Galaxy 3, Black Panther 2, Captain Marvel 2 and the Fantastic Four, so awesome! No Ant-Man 3 announced, which is too bad. But perhaps Scott Lang deserves his retirement from superheroics, and his daughter can take over in Young Avengers!

The Marvel Studios panel was hype in its purest form. I am excited for all of this news and cannot wait to enjoy my entertainments for years to come! I’m also definitely signing up for Disney+ when it comes out later this year.

What were your thoughts about all the announcements? Let me know in the comments!