So Scream is Getting an Ongoing Series…Neat!

Scream is my favorite of the symbiotes. I wasn’t into comics yet when Venom and Carnage first appeared, so I never developed an attachment to them. Whereas Scream showed up right in the middle of the Clone Saga, at the perfect time for me to latch on. Not only is she just plain cool by being the first female symbiote, but she looks awesome!

It’s disappointing that she’s only ever been a minor character, but all this Absolute Carnage craziness has led to her finally making a comeback! And that comeback will including a new ongoing series in the fall, called Scream: Curse of Carnage. 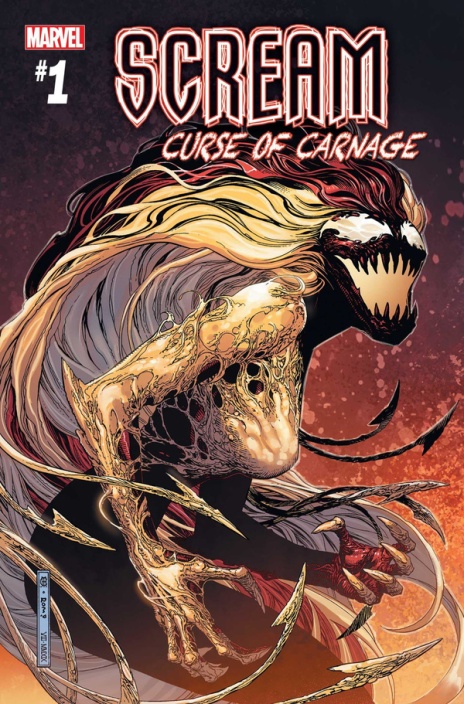 The comic will be written by Clay McCleod Chapman, who I don’t know, with art by Chris Mooneyham, who I also don’t know. But I am hope springs eternal that another one of my favorite obscure characters is getting some attention!

I’m also reading the Scream tie-in mini-series to Absolute Carnage, the first issue of which came out this week. It was…fine. Just fine. But it’s also just getting started, so here’s hoping it really comes together.

Anyway, here’s the text for the first issue of Scream: Curse of Carnage:

Patricia Robertson, Andi Benton, Donna Diego… it’s all been leading to this as one of the original – and possibly strongest – offspring of the Venom symbiote at last stars in her own, self-titled ongoing series set in the Marvel Universe! But after the events of ABSOLUTE CARNAGE, what remains of the Scream symbiote as it was before? Does it even have a host? What are their intentions? And what will a pair of web-slinging wallcrawlers have to say about its presence in New York?

Here’s hoping Scream gets to have some fun going forward! It’s a shame they didn’t use her in the Venom movie.

And did you know that Scream is the symbiote character that appears in the Spider-Man ride at Universal Studios? It was a fun ride, but then I was very disappointed that they didn’t have any Scream merchandise in the attached gift shop!