6 Things I Want to See in a Nova Movie

The internet being what it is, rumors have started to percolate that Marvel is planning a movie about Nova, the Human Rocket. There is absolutely no confirmation of this. But I think I saw a Nova movie as a possibility mentioned on at least two different websites, so that prompted me to think up a list of everything I’d like to see in a Nova movie! That is how the internet works for me, after all.

I fell hard for Nova during Annihilation, as I’m sure many people did. I had zero interest in the character during his New Warriors days or anything before Annihilation. But then Marvel turned that teenage nobody into a champion of space! He was a young but grizzled hero trying to hold together an army of cosmic cameos to repel an otherworldly invasion. Nova was just damn cool. And a Nova movie could be a lot of fun, especially with the Nova Corps already established in the MCU.

Join me after the jump for what characters, concepts and stories I’d like to see in a Marvel Nova movie!

Two Novas for the price of one

My gut instinct is to want Richard Rider as the Nova for the movie. He’s the Nova I actually like, he’s the original Nova, he’s the badass Nova. Richard Rider is the perfect choice to play Nova in the big budget movie. But he’s also a straight, white, brown-haired male character; and I am absolutely in favor of pushing diversity in these movies. So…maybe go with Sam Alexander, the newest Nova?

Honestly, why not combine then? Go with Richard Rider’s origin story and give him Sam Alexander’s Hispanic background. In my ideal Nova movie, I prefer Rich’s origin story over Sam’s. In the comics, Sam is the young, teenage son of a member of the Nova’s black ops squad, who inherits his father’s helmet and has to discover the Nova Corps on his own. I don’t really want to see the teenage hero angle. Or the idea that humans have been Nova Corps members before. But I can easily see that Sam Alexander makes for a more diverse lead character than plain white bread Richard Rider, whose origin story is a bit more traditional and works better for the movie in my head.

That is one handsome man

Did you know that actor Scott Adsit, from 30 Rock, is a member of the Nova Corps in the comics? I mean, he may not be the actual actor and just a guy who takes his name and look as inspiration, but he’s apparently totally a thing! I guess he was first used as a member of SHIELD in the Deadpool comics, then jumped over to the Nova Corps. It’s weird as heck. But I met him once at a comic book convention, so he’s into comics and probably knows the writers or artists. And so if we’re going to have the Nova Corps in the movie, might as well bring him in for a cameo! People remember Scott Adsit, right?

The fun part about the MCU Nova Corps — which appeared in the first Guardians of the Galaxy — is that John C. Reilly’s character was an actual Nova from the comics. In fact, Rhomann Dey was the Nova Corps member who passed along his powers and helmet to Richard Rider, making him Nova in the first place. And I think that’s the origin story I would like to see. After Thanos destroyed the Nova Corps off-screen at the start of Avengers: Infinity War to get the Power Stone, establish that Dey is one of the last surviving Corps members and he somehow makes his way to Earth and has to choose a human to take over the power of Nova.

Granted, the origin story is pretty similar to that of Green Lantern…for obvious reasons. But I still think it’s a solid origin story for a movie Nova. And bringing back John C. Reilly is key to making it work. That guy is hugely entertaining, and continuity in the MCU is key!

Perhaps even comics accurate this time

A pretty good story for the Nova movie would be the rebuilding of the Nova Corps after Thanos destroyed it. If Dey is one of the last members and he desperately passes off the helmet to our hero, then it could be up to the new Nova to go out into space and rebuild the Corps to take on whatever villain the movie delivers. That would lean into the uniqueness of Nova. He’s not just a singular superhero like everybody else. He’s a member of a whole Corps of similar officers. It would be fun to have Nova go around recruiting new members!

This would also be a great time to introduce the Worldmind storyline. In the comics, when Richard Rider was the only Nova left, he took on the entirety of the Nova Worldmind into his supersuit and used that to help jumpstart the Corps. That could explain why movie Nova has powers that we didn’t see in the previous Novas. Granted, that would be a lot like Iron Man talking to Jarvis or Friday in his armor…but I think the movie would find a different way to do it. 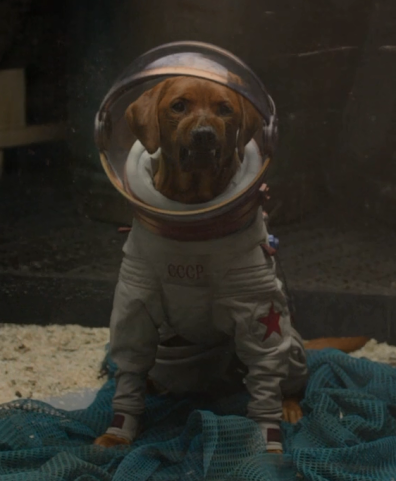 Such a good boy

Speaking of needing to recruit new members to the Nova Corps, think of all the fun cosmic cameos the movie could have! It could come after Guardians of the Galaxy 3, which could introduce a bunch of new characters to reuse in Nova. Then have a fun recruitment montage. Howard the Duck! Kraglin! Star-Lord! Beta Ray Bill! Cosmo! Bring back Cosmo! Have some of the Guardians of the Galaxy show up. And if you really want to win over fans, lay down some hints towards Galactus! Now that would be an Easter Egg to end all Easter Eggs!

You’re already afraid of her

I really racked my  brain to come up with a good villain for a Nova movie. Nova doesn’t really have any noteworthy rogues in the comics; nor should the Nova movie be beholden to a comics-accurate Nova enemy. I figured the Nova movie could have access to the entire Marvel cosmic roster. So what about Terrax the Tamer? That would be a great Galactus tease! Or maybe the Fraternity of Raptors, leading the way to Darkhawk! But the more I thought about it, the more these random cosmic villains just wouldn’t do. The villain needs to be the former Nova Prime, as played by Glenn Close!

Glenn Close is obviously a great actor, that doesn’t need to be said. So how about we have her expand on her previous heroic role and turn it into a misunderstood villainous one! After the destruction of Xandar and the Nova Corps at the hands of Thanos, perhaps Nova Prime survived and was hardened, deciding that she needed to go to extreme lengths to prevent future Thanoses — especially if she survived the Snap and got to see how the rest of the universe survived those five years. The movie could add a Captain Marvel cameo, showing some of what she was doing out in space, as mentioned in Avengers: Endgame. Maybe Captain Marvel and Nova Prime teamed up at some point?

Perhaps Close now has some really hardcore plans on rebuilding the Nova Corps, plans that run in opposition to what the Worldmind has planned, and that’s why the Worldmind linked up with Dey and now movie Nova. Then let Glenn Close really terrify things up. She could be ruthless. She doesn’t need to sacrifice any of the badass commander character she was before, she’s just been hardened into making some bad, but potentially sympathetic, choices. Or maybe let her go full super-villain, becoming the very thing she’s hoping to prevent.

Either way, bringing back Glenn Close would be a great way to tie the new Nova back to the original debut of the Nova Corps in the MCU, plus it would mean Glenn freakin’ Close is your movie villain!

Posted on May 15, 2019, in Lists of Six!, Marvel, Movies and tagged Guardians of the Galaxy, Marvel Cinematic Universe, Nova, Nova Corps. Bookmark the permalink. Leave a comment.