← The 6 Most Wicked Snowmen in Pop Culture
Hellboy and Men in Black: International Trailers Look OK →

Welp, the Mimic is Dead

I knew this was coming. From the very moment I found out the Mimic was going to appear in the Extermination comic, I knew his days were numbered. I held on to a little bit of hope that he’d somehow make it all the way to the end, that there was no reason to kill one of my all-time favorite comic book characters…but it was a fool’s hope.

At least he gets to go out like a badass. 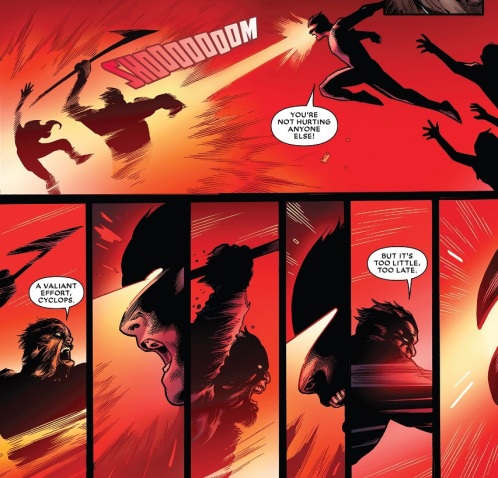 That was the ending to Extermination #4, the previous issue from a couple months ago. We were all led to believe that was Young Cyclops…who gets immediately harpooned by Ahab. It was a big cliffhanger.

But in this week’s Extermination #5, we find out that was Mimic…who had somehow found the time to grab Cyclops’ visor off his head, shove Young Cyclops to the side and attack.

That’s not even how Mimic’s powers work. He doesn’t need the visor to use his copied Cyclops powers. They really just wanted that fake out kill to make people think Young Cyclops had been killed instead. But more on Mimic’s powers in a bit.

This has not been a good year for me. They killed Phil Urich. They nearly killed Strong Guy and Stingray. And now the Mimic is dead for no good reason. At least he died a hero.

And to think, all this time, his death was just waiting for us. Like Malcolm Reynolds said, about someone carrying a bullet for you and you don’t even know it. All this time the Young X-Men were around, their removal was going to involve killing the Mimic. Yeah, the original creators that brought them into X-Men comics probably didn’t plan it this way. I’m sure using the Mimic was just a quick fix idea that got thrown into the mix at this late stage. But the future is the future, and this was always going to happen this way.

But you want to know what the worst part is? The part that really sticks in my craw?

The creative team had to willfully ignore everything in this issue that would have normally let him live. Based purely on how his powers work, the Mimic didn’t need to stay dead by the end of the issue.

Mimic copies the powers of people in his proximity. He doesn’t need to touch them, like Rogue, he just has to be near them. He has some measure of control as to who he mimics and when, but it’s otherwise automatic. In fact, this is how he “came back to life” the last time he was “killed” back in the early 1970s. The Mimic automatically copied the powers of a nearby Wolverine and healed the radiation that had killed him.

And wouldn’t you know it, there were three Wolverines in the big fight in Extermination.

Honey Badger, X-23 and Old Man Logan are in the same scene, in close proximity to the Mimic. All he’d have to do is nothing, and his powers would automatically copy any of them and he’d heal the simple chest wound and be fine.

It’s not like Mimic was a major player in Extermination. It’s not like his death was crucial to saving the world or anything. It was a throwaway death so that Marvel could get a fake out cliffhanger in the penultimate issue. There’s absolutely no reason why there couldn’t be a throwaway panel at some point in the issue.

“Yeah, I just copied Logan over there and healed. I’m fine, thanks.”

But nah, Marvel decided to keep him dead. Because why not? Where’s the harm?

I’m not particularly bothered. It stinks that he’s dead, but death never sticks in comics anymore. Just this year, we’ve had Jean Grey and Multiple Man come back from the dead. This final issue of Extermination also brings another X-Man back from the dead. And there’s no way they’re going to keep Cable dead after he was killed earlier in Extermination.

So Mimic will be back someday. I just gotta wait for it.

← The 6 Most Wicked Snowmen in Pop Culture
Hellboy and Men in Black: International Trailers Look OK →