← History of the Predator, Animated!
Welp, the Mimic is Dead →

The 6 Most Wicked Snowmen in Pop Culture

Christmas is right around the corner. Hanukkah has already come and gone. The holidays are in full swing and, most importantly for today, winter weather is being a real bitch! So how about we talk about snowmen?

Every winter season, I like to do a holiday-themed List of Six that celebrates some portion of this joyful time of year. And I’ve really stretched that idea from time to time. I’ve done elves, reindeer, Jesus, Christmas lights, and the abominable snowman, to name a few. I don’t know what I’m going to do next year, but this year I’ve cobbled together a pretty fun list of the most evil and wicked snowmen in pop culture! I probably could have done good snowmen, but where’s the fun in that? 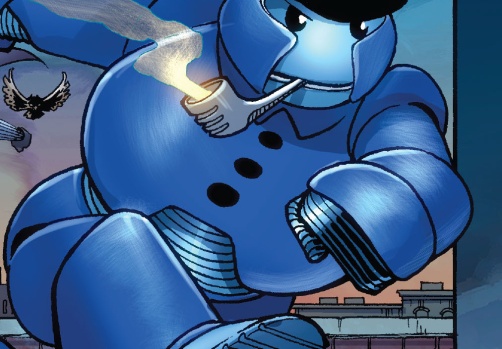 That is dedication to a theme

Blue Snowman is a classic comic book villain that showcases just how insanely awesome comics can be. Blue Snowman is, inexplicably, a Wonder Woman villain, and it just gets weirder from there. Byrna Brilyant was the daughter of a scientist who invented ‘blue snow’, a super-cold snow that instantly freezes anything it touches. Bryna took this blue snow after her father’s death and designed a pudgy snowman outfit that specifically looked like a man, using it to hold local farmers hostage. She was defeated by Wonder Woman, but has popped up here and there throughout the decades, combining robotic snowman outfits with dangerous blue snow. In her most recent reboot, Byrna was piloting a giant mech suit — though sadly, it didn’t look like a snowman anymore.

The evil snowmen that terrorized the Doctor in the 2012 Christmas special were created by classic villain The Great Intelligence. They’re vicious-looking snow peeps who terrorize Clara Oswald in the early 1890s, back when her origins were weird and unknown. The snowmen were mostly a visual problem, but they were still pretty scary and evil, all things considered. I’m honestly surprised there aren’t more armies of evil snowmen out there in the world. Calvin was definitely on to something… 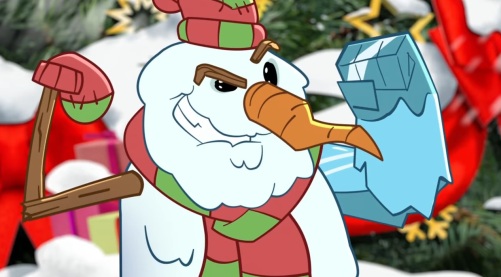 This dastardly snowman showed up in the Danger Mouse reboot, so you know he’s legit. He’s got one stick arm and one ice arm, which can freeze anything it touches. This evil snowman stole Santa’s magic hat — because we all know that’s where Santa’s magic comes from — and uses it to start canceling Christmas. The evil snowman also steals the sleigh and the reindeer and unleashes an army of evil snowmen, then eats the hat to turn into a giant monster! Was Santa’s hat able to do that all this time? Danger Mouse teams up with Santa to save the day, which involves dragging the evil snowman across the sun in order to melt him to death. Youch.

A long way from Pasadena

Goosebumps is classic evil, including one of their early books, Beware, The Snowman. When a young girl moves to a new town on the edge of the Arctic Circle, she’s greeted by a ton of identical snowmen throughout the city, each with a red scarf and a scar on the side of their heads. The townsfolk don’t like to talk about it, but the girl eventually learns that there’s an evil snowman living in a cave at the top of the mountain. The girl goes to investigate and discovers that the snowman is not only real, but he’s her long-lost father! Or at least that’s the lie he’s using to get her on his side. The girl believes him long enough to undo the snowman curse, revealing a monster underneath the snow! This book is pretty darn twisty, and it ends with her real father showing up and commanding the army of scarred and red-scarved snowmen to show up and save the day! Classic Goosebumps all around! 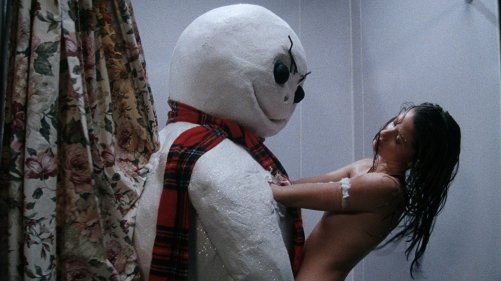 This is the most salacious picture on my entire blog

There exist two movies in the world entitled “Jack Frost” that feature a human being magically turned into a living snowman. Neither of these movies is actually about the titular sprite named “Jack Frost”. Such is the world. The movie we’re most interested in is the 1997 horror comedy, wherein a serial killer becomes a snowman through some weird science magic and then just kills a bunch of people in grand horror parody fashion. It’s about as brutal and crazy as slasher parodies of the late 90s would get. Suffice to say, this evil snowman racked up a pretty hefty body count by the time his sequel was over. What’s that? You didn’t know there was a sequel! Well now you do, suckers! Now you have to live with that knowledge forever! That studios were willing to make a sequel to Jack Frost, but your own screenplay will never get made! Mwahahaha! 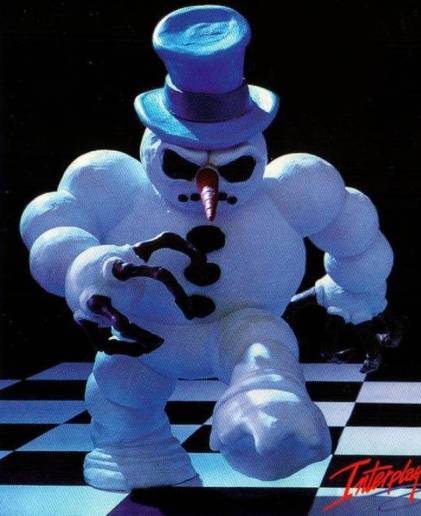 A mutated serial killer turned snowman is one thing. But if we’re talking the gnarliest, most wicked, most badass snowmen of all time, look no further than Bad Mr. Frosty from ClayFighter! It’s right there in the name! You don’t call yourself ‘Bad’ in the early ’90s without being the height of evil radical. Bad Mr. Frosty was one of a handful of fighters in the short-lived, not-yet-rebooted, claymation-themed fighting game. Bad Mr. Frosty was the poster boy, appearing on all the covers, and only one of two characters to appear in every game in the series. He was known for having a bad attitude, which, again, in the early 1990s, was something to be feared.

Apparently, based on what I’m reading, this game really was all done with real clay and stop motion animation. That’s pretty damn incredible. Claymation is a lost art, and to use it in a video game, when you’ve got to account for all the characters’ fighting moves, is pretty impressive. And that’s why Bad Mr. Frosty tops this list. Nobody else gets that kind of effort!

Also, what a snowman has to do with a fighting game is anybody’s guess.

← History of the Predator, Animated!
Welp, the Mimic is Dead →