Tom Taylor is the writer of All-New Wolverine and X-Men Red, and I’m a really big fan. His biggest contribution so far to the world of the X-Men is the creation of Gabby, the joyful and adorable clone sidekick of X-23. Gabby, also known as Honey Badger, is just plain great. There’s no arguing that point.

But something really weird happened in this week’s issue of All-New Wolverine. I’m not trying to make any judgments here, I just want to run it by you all.

The story takes place in an alternate future, where Gabby is the new Wolverine and Laura is the queen of Madripoor. They’re still the best of sister friends and hang out together. And in doing so, Laura asks Gabby about her family…about Gabby’s husband and kids… 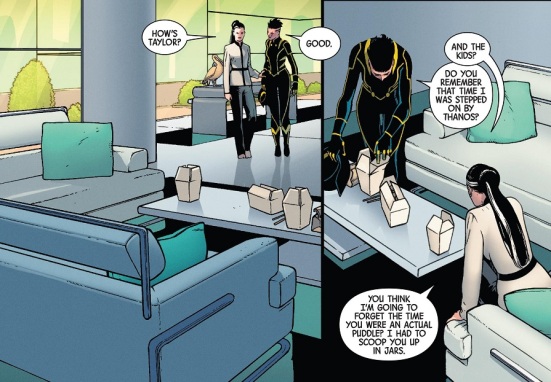 You see it, right?

That’s weird, right? That he named Gabby’s future husband after himself?