Ever have one of those weeks where work gets really, really busy and you just can’t read as many comics as you’d like? That’s me this week…and next week. And then it’s Halloween! At least we had some really good comics this week, from another stellar issue of Tom King’s Batman to a nifty Harley Quinn, drawing us ever close to the end.

Comic Book of the Week goes to the oversized Mighty Thor #700, which uses its anniversary status to tell some really neato tales! 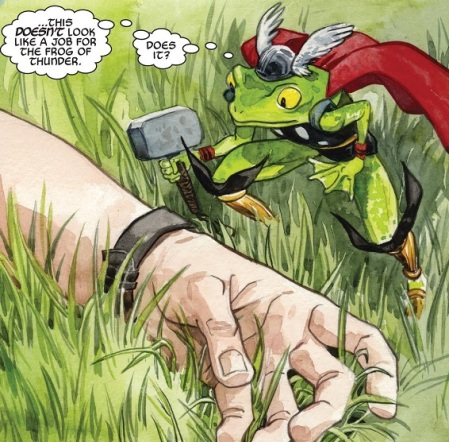 Everything should be a job for the Frog of Thunder

It is with a heavy heart that I announce that I’m throwing in the towel with The Wild Storm. I really wanted to stick with the comic for the entire duration and really provide an outsider’s eye to the experience, but with the latest issue this week, every reserve of energy I had left to care has been exhausted. This isn’t the comic for me. I’m sorry if I’m disappointing anyone and I hope you’re all still enjoying The Wild Storm.

Meanwhile, I’m super enjoying Saban’s Go, Go Power Rangers. I didn’t get around to writing up a review for the new issue, but the series is spectacular!

END_OF_DOCUMENT_TOKEN_TO_BE_REPLACED

Big news, everybody! This week, we have an abundance of DC Comics! I’ve been trying to read more of them lately, despite being a confirmed Marvel Zombie. And this week, the stars aligned and more of my DC comics came out than Marvel! Huzzah and kudos!

So we’ve got new Harley Quinn, new Aquaman, new Batwoman, new Wild Storm and the Comic Book of the Week, the new Batman! This whole War of Jokes and Riddles has been worth it for what writer Tom King is doing with Kite Man.

END_OF_DOCUMENT_TOKEN_TO_BE_REPLACED

You know what I love to do on vacation? Nothing! Flame Con was a huge success last weekend for Gamer Girl & Vixen, and I had a super fun time in New York City. But now I’m just living out the rest of my vacation in calm and solitude. Gotta love that.

Had some great comics this week, from new Power Rangers to Harley Quinn, and a somewhat disappointing new issue of Chip Zdarsky’s Spider-Man. Not sure what happened there. Comic Book of the Week goes to the new Iceman, which is turning out to be a remarkably well-built comic.

Secret Empire is almost over, thankfully. It’s worn out it’s welcome. Nick Spencer now seems to just be narrating what amounts to just a giant battle of superheroes punching goons. It’ll all be over soon and we can move on with our lives.

END_OF_DOCUMENT_TOKEN_TO_BE_REPLACED

Man oh man, it’s San Diego Comic Con weekend! So much cool news, so many good trailers, so much to get excited about! But for another year in a row, I’m stuck here in Central New York, about as far from San Francisco as you can get in the continental United States. Someday I’ll be out there.

At least this week was marked with good comics, like Batwoman, Harley Quinn, Power Rangers and the long-awaited second issue of the new Spectacular Spider-Man! All good comics, but Comic Book of the Week goes to Batman #27, as writer Tom King throws us a curveball with the unexpected new origin of Kite Man!

Secret Empire continues to slog along. It’s getting a little long in the tooth at this point, and isn’t as sharp anymore. While The Mighty Thor is still good, but I skipped reviewing the issue again because it’s kind of just killing time. The War Thor is a neat idea, but he hasn’t done much of substance just yet. Still a great comic.

Also, in case you were curious, like me, the first issue of Astonishing X-Men does not yet feature the return of Multiple Man. I’ll let you know when it does! It was a pretty cool X-Men comic though. I like the idea of gathering a bunch of disparaged X-Men to go on an impromptu mission. I’d like it even more if they hadn’t added Old Man freakin’ Logan.

END_OF_DOCUMENT_TOKEN_TO_BE_REPLACED

Woo boy, do we have a wallop of a column today. As I’ve whined about in the past, all of my favorite comics tend to have the habit of coming out in the same week. Or maybe I’m just reading too many comics. Whatever the case may be, I went all out and have reviewed nearly a dozen comics this week!

We’ve got Power Rangers, we’ve got a new Spider-Man comic, we’ve got Luke Cage and Iceman, and I tried to throw in more DC comics, like Batman, Harley Quinn and hopefully the start of my Aquaman coverage. Thankfully, there were some real gems this week.

But the standout, as has been said numerous times, is the new issue of Silver Surfer. This consistent Comic Book of the Week is going to break my damn heart.

I almost jumped back into reviewing The Mighty Thor now that the Shi’ar story arc is over, but this week was a standalone issue to introduce The War Thor…which, I guess, is similar to The War Doctor? It was a fine issue, and I suppose this new concept could be fun, but there were just way too many comics on my review pile already.