6 Cartoon Couples Allowed to be Queer at the Very End

So this is a thing. And it’s surprised me that I’ve been able to find six examples to make this list. But the series finale of She-Ra and the Princesses of Power provided the last piece of the puzzle and I finally finished this article. It’s a sign of the times. There have been multiple instances where a cartoon show’s series finale finally allows certain characters to come out of the closet and be true to their gay, lesbian and/or bisexual selves.

I think it’s great! But it’s still weird that it’s only allowed to happen in the series finale, right? 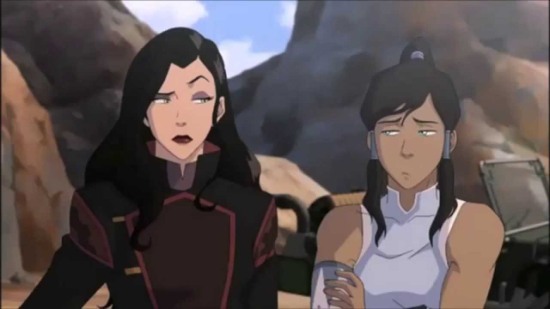 Give us some series premiere action!

Some day, we are going to get a show where the main character and their love interest are both openly queer. Or are both somewhere on the LGBTQ+ spectrum. It’s gonna happen. Some day we’re going to get a lesbian Disney Princess. Some day, a big fancy company is going to purchase the rights to my own self-published queer comic, Gamer Girl & Vixen, and turn it into a popular, award-winning show! And no, that’s not the only reason I’m doing this list! I just wanted to shamelessly self-promote for a little bit.

Join me after the jump for the phenomenon that is LGBTQ+ cartoon couples allowed to come out and be proud at the very, very, very end of the series. SPOILERS for the end of She-Ra and the Princesses of Power.

The list begins with Shiro and only Shiro because he isn’t really part of a known couple. Shiro is the pilot of the Black Lion at the start of Voltron: Defender of the Universe, the excellent Dreamworks reboot that aired from 2016 to 2018. Loved the show! Lots of great characters. But Shiro wasn’t revealed to be gay until the start of the seventh season! It went unmentioned for nearly the entire series, and it was only revealed in flashbacks that he was in a relationship with a dude named Adam. And then Adam was killed. He appeared in two scenes, mostly flashbacks, and then he was gone. Which brings us to the series finale of Voltron, which included a happy epilogue sequence where we see Shiro marry a new guy named Curtis. We don’t ever meet Curtis. We don’t know anything about him. It’s just that, in the series finale, Shiro gets to be in a stable, happy couple. 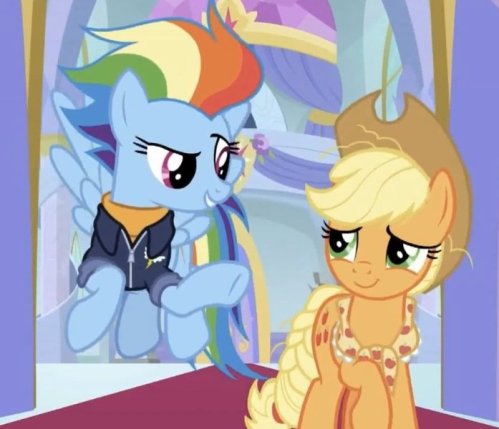 This one is pretty tricky. It depends on what you want to read into the context presented. Romance was never really a thing for the main characters in My Little Pony: Friendship is Magic, which ran for 10 seasons between 2010 and 2019. The Mane Six didn’t have romantic partners and rarely, if ever, even had crushes or infatuations. It just didn’t happen, especially not between themselves. But then we got to the series finale, which involved a jump to the future to see where the characters end up. And when we finally catch up to Applejack and Rainbow Dash…they’re together. I mean that mostly in the physical proximity sense, but there’s something there. They arrive at the castle together, bantering and bickering like an old married couple. It’s odd that they arrive together. Like, the subtext is really, really strong. They don’t make anything overt. It’s just…there’s a feeling. Here, see for yourself. Look me in the eye and tell me they’re not a couple in that scene. You can’t. 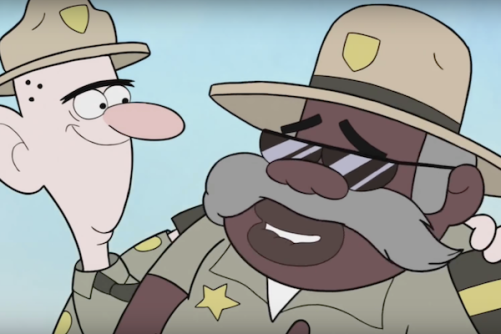 The office politics are rough

Gravity Falls was many things, and thankfully in the series finale, it was openly gay. Or, at least, two comedic side characters were. Sheriff Blubs and Deputy Durland were the local law enforcement throughout the series, which ran from 2012 to 2016. They were dumb but endearing characters, and always good for a laugh. And then in the finale, the show’s creators and writers just totally went for it and revealed that the two of them were in love, as well as in law enforcement. I don’t recall there ever being much sexual tension between them over the course of the show, but apparently the fans were into it. And the series finale was allowed to make it real. This is the only Disney show on this list. Say of that what you will. 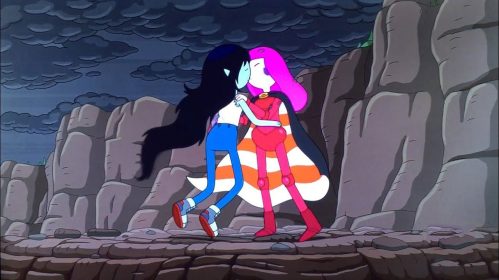 Oh man, this one is a big and awesome one. Adventure Time was a show to end all shows. Is there any show more perfect? More amazing? More sprawling and great?! Are there characters out there who are more fun and more awesome than Princess Bubblegum and Marceline the Vampire Queen? I defy you , there are not! Probably! This was a relationship that was hinted at for pretty much the entire series, which ran from 2010 to 2018. But I think I remember this was also one of the only shows that came out and addressed the issue, stating that the Power That Be wouldn’t allow them to be out. So that storyline was relegated to some tie-in comics. But time heals all wounds, the hints became more and more obvious, and they were finally allowed true love’s kiss in the series finale. Better late than never.

The last two entries on the list are exact opposites in a weird way, but a way that I definitely like! 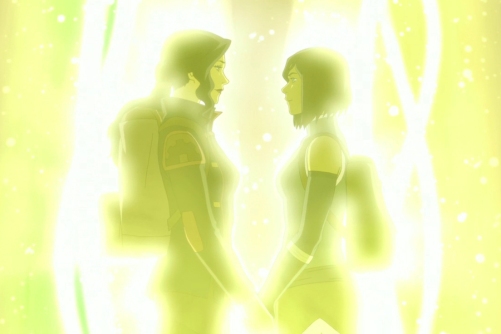 The handhold heard ’round the world!

This relationship came out of nowhere! It’s also the entire basis for this list, because everybody remembers the end of The Legend of Korra, which ran from 2012 to 2014, and served as a sequel to Avatar: The Last Airbender. As you can tell from all the dates I’ve mentioned throughout this list, this show did it first and paved the way. That’s no small feat. But the thing about Legend of Korra was that relationships were front and center on that show. Both Korra and her eventual girlfriend, Asami, were in multiple relationships with men throughout the series. Sometimes they even dated the same guy. There was never any hint that the two of them were queer or even interested in each other romantically. Then at the very, very tail end of the very last episode, Korra and Asami clasp hands and walk off into the sunset together (or, more specifically, they walk through a portal into the Spirit Realm). They don’t get to kiss or declare their love for one another like on some of these shows. But that hand-holding was meant, very specifically, to be the two of them coming together romantically. And like I said, it paved the way for all these other shows. So that’s great!

But still, it’s only allowed to exist in the last few seconds of the show. And maybe I was blind to the subtext while watching Legend of Korra, but I don’t remember the two of them even hinting at anything romantic. Unlike our last couple… 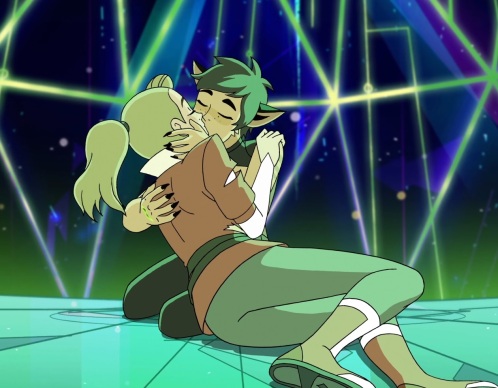 Another ‘end of the world’ smooch!

Adora and Catra, the protagonist and main antagonist of She-Ra and the Princesses of Power, were finally able to get past the emotional roadblocks in their hearts and declare their love for one another, sealed with a kiss, in the series finale of the show. But the big difference between Adora/Catra and Asami/Korra is that She-Ra and the Princesses of Power was kind of built around the Adora/Catra romance. Like, they’re not overt with it, but there was some damn strong subtext, let me tell you. Catra had a lot of hang-ups. And Adora wasn’t perfect, by any means. But it’s pretty clear from the very start of the show that their rivalry had true feelings at its heart. And those feelings were on full display during the roller coaster ride that was their relationship over the course of five seasons, running from 2018 to 2020.

So while they’re only allowed to become a couple and admit their love in the series finale, the show was never shy about putting that subtext on full display. Nobody watching She-Ra was blindsided by the ending, and all of us were tickled pink for the two of them!

I felt it was important to include the dates the shows aired to really hammer home the sign of the times. Back at the start of the 2010s, these shows weren’t allowed to make anything LGBTQ+. But years pass, times change, and it’s happening more and more. Check out the new season of Harley Quinn, for example. Great show!

And if you are a high-powered TV executive who wants to make a Gamer Girl & Vixen cartoon, email me! Let’s make this happen!

Posted on May 20, 2020, in Cartoons, Lists of Six!, Television and tagged Adventure Time, Gravity Falls, Legend of Korra, My Little Pony, My Little Pony: Friendship is Magic, She-Ra, She-Ra and the Princesses of Power, Voltron, Voltron: Defender of the Universe. Bookmark the permalink. Leave a comment.