← The Morbius Movie Actually Exists!
BoJack Horseman is Ending; I am Not Ready →

New this week, Marvel Comics has announced their Outlawed storyline, in which teenage superheroes will be outlawed by the federal government. Oddly, this will lead to a whole new relaunch of a bunch of teen superhero comics, like Champions, New Warriors, Power Pack and potentially more! It’s as if they didn’t even hear the new law! 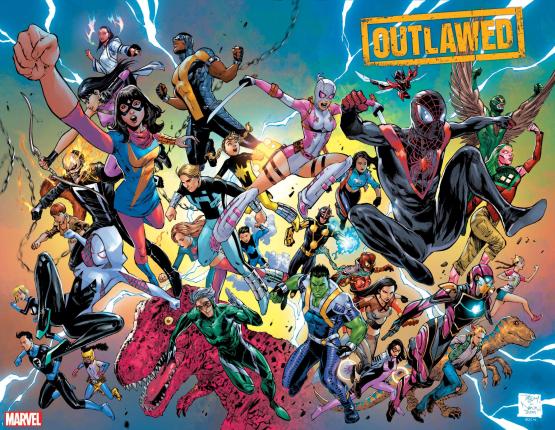 It’s gonna be a whole thing

I think it’s an interesting storyline idea and I wish Marvel all the best in seeing it through! And it got me thinking about my favorite teen superheroes. There have been a lot over the years, but as I looked over the lists I found online, I realized my own favorites list was pretty small. I discovered that I haven’t really been a big fan of teenage superheroes over the years. I’m a fan of a lot of young adult, early-20s, college-aged superheroes like Squirrel Girl or the Slingers. But teens? It’s a short, tight list!

Join me after the jump for my favorite teenage superheroes! And feel free to share your own favorites in the comments! 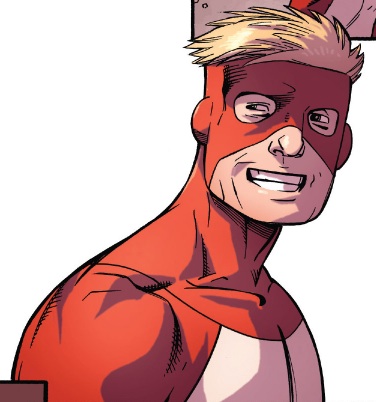 Excavator is a super-villain, and so minor a character that I don’t think he can properly count. But I’m a big fan…of the idea. Excavator is the teenage, tag along member of the Wrecking Crew, themselves a staple of Marvel super-villains. He debuted for a single scene in the original Runaways comic, a kid who ran away from home to join his villain dad, Piledriver, and was given a magic shovel. He got his butt whooped by the Runaways and that was that. I thought he was just a funny little bit.

Except somebody else out there liked him, because Excavator showed up randomly in Avengers Undercover a couple years later. And then he had a small role in Civil War II, where it was predicted he would murder his father, so he was arrested for pre-crime. He’s still out there somewhere, rocking his magic shovel, and I think he’s a nifty idea in general. 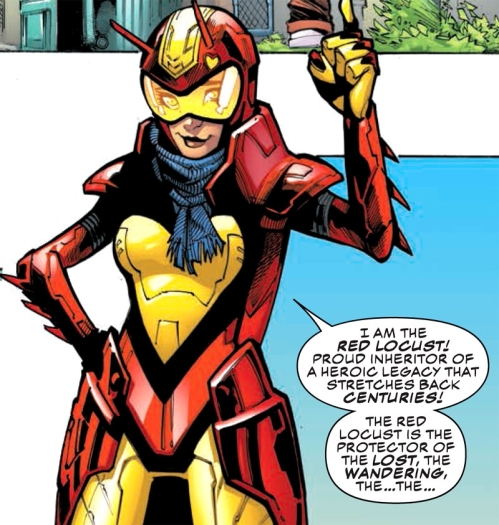 Scarves are all the rage these days

I have only read one comic with Red Locust in it and I was immediately hooked on this new, fascinating superhero! Fernanda Rodriguez is a descendent of the Aztec Locust Brotherhood, and was chosen to bear the armor and the honor. She then went and studied modern technology and upgraded the armor with hydraulics and other nifty tech. Now she’s a kickass member of the Champions, full of confidence and leaping abilities and she’s just great. I haven’t had a chance to read many Red Locust stories, but I’m definitely going to keep my eye on her in Outlawed. 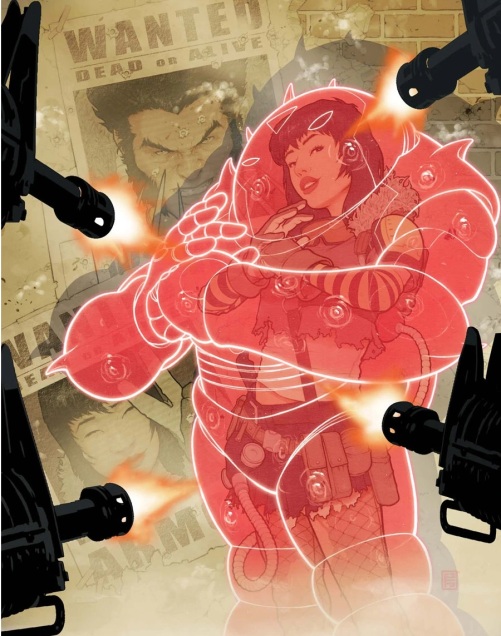 This came as a bit of a surprise to me, but I really do think my favorite teenage X-Man is Armor. I was never a fan of the original New Mutants and I didn’t really get into any of the new New Mutants of the modern age. But I was a huge fan of Joss Whedon’s Astonishing X-Men, where he introduced Hisako Ichiki, Armor. She joined the X-Men on Whedon’s space adventure as the young, audience-surrogate. She’s got the power to create a bright red force field of shaped armor around herself, and that’s pretty darn cool. Since then, Armor has been a solid staple of the young X-Men adventures and has something of a starring role in the new status quo. So awesome!

I was also a fan of Goldballs, but he’s gotten…weird, recently. 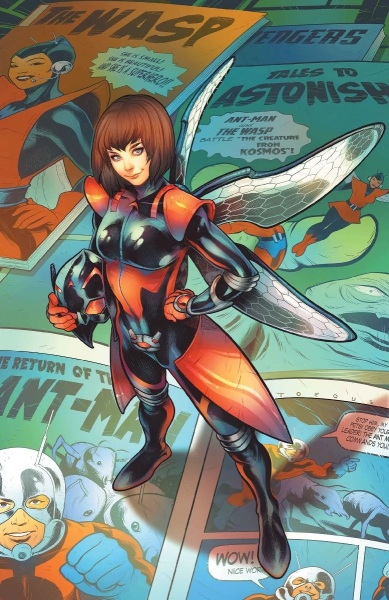 Nadia Van Dyne is such a delightful superhero! Funny, charming, smart, kickass, naive to the point of adorable and with just enough of a dark side to give her some depth. Raised by the Soviets in the infamous Red Room, she is the long-lost daughter of Hank Pym, who has since taken on both his legacy and that of her adopted mom, Janet Van Dyne. Nadia’s comic series was one of my recent favorites, and I hope she sticks around for a good, long while. She continues the legacy of some classic Marvel heroes while being her own person. And that’s pretty darn cool. 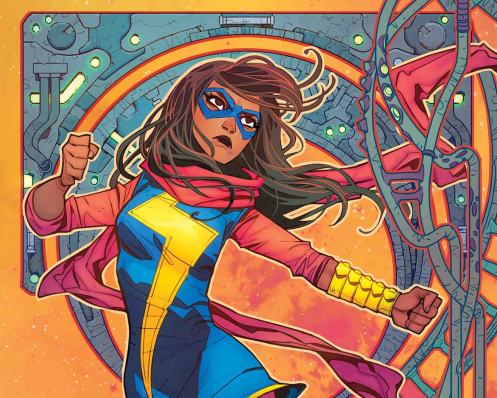 She’s building some kind of machine?

The best new superhero of the millennium is Kamala Khan, the new Ms. Marvel! Everything about Kamala has been awesome. Personally, I loved the unique and personal look into her life as a young Muslim living in Jersey City. As a white guy who was raised Christian, I really appreciated that in-depth, realistic look into another culture, and it helped to really ground Kamala and her superhero origin. Beyond that, she’s just a cool superhero and has been the star of some great comics. I’m thrilled for all of the attention and popularity she’s garnered over her few short years in comics. She deserves all of it, and I can’t wait for that TV show in a couple years! 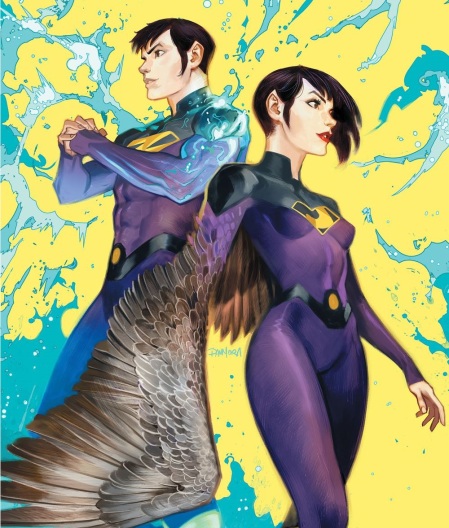 A year or two ago, these teenage alien twins would have been far lower on this list. But their recent comic book series has been wonderful, and they are some of my favorite characters in all of comics these days! I didn’t have much history with the Wonder Twins back when they were on the Super Friends TV show, but I started loving them rather ironically when I discovered their sporadic use in actual DC Comics. Did you know they were in something called Extreme Justice in the 1990s? Oh man! But the new comic series has introduced Zan and Jayna to the DC Universe proper as real teenagers with real problems, real emotions and real character, and the two of them are a phenomenal pair of heroes! 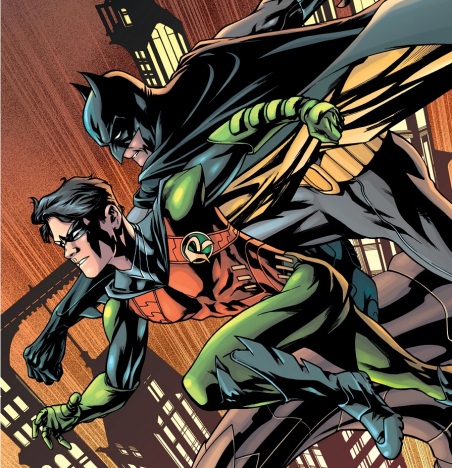 Robin is the whole point of this list. I am a huge Robin fan, but I’m more a fan of the mantle than any individual character. Robin is the quintessential teenage superhero sidekick, and he has always been relevant. I know a lot of people don’t like Robin, but I think he’s the perfect foil to Batman’s world. All good heroes need their ‘guy in the chair’, and Robin not only fills that role for Batman, but he’s also got Batman’s back out in the field. He’s the light to Batman’s darkness, the comedian to Batman’s sour puss. He’s the apprentice to the master, the student to the teacher. And he’s just plain cool at the job. But it’s been a long while since we had a proper Batman and Robin team in the comics, and I doubt we’re going to get another such pairing anytime soon…

← The Morbius Movie Actually Exists!
BoJack Horseman is Ending; I am Not Ready →