← I Ordered a Henchman-4-Hire Hat!
The Blob-assaince Was Good Enough →

6 Thoughts on the Third Season of Jessica Jones

And so the Marvel Netflix Defenders era has come to a quiet, whimpering end. The writing has been on the wall for a long time, and the final season of Jessica Jones has dropped. We don’t go out with a big, grand, Defenders reunion. Just a quiet, emotional episode of one of the top shows. Goodbye, my friends.

Once upon a time, I did a List of Six of the things I wanted to see in the Netflix Defenders shows, back when they were first announced. I got most of what I wanted, so that’s nice. But overall, the shows were more disappointing than we all expected them to be. They were largely good, I think. And history will be kind to a lot of what happened. As for the final season of Jessica Jones, I liked it.

Join me after the jump for my full thoughts on the final season! Expect FULL SPOILERS for the whole season!

6. It was a fine season of television 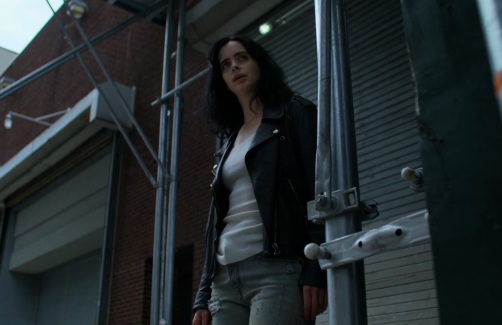 It was good. It was fine. Honestly, I don’t really have much to say about the overall quality of the third season of Jessica Jones. I liked it well enough, but it wasn’t…I dunno. It wasn’t anything special. There were no really exciting moments. There were no scenes I’ll go back and re-watch because of how cool they were. There’s no grand drama. It all just happens, which is a problem I’ve had before with these Marvel Netflix shows.

I didn’t actively dislike it, like I did with season 2. And I didn’t actively love it, like I did with season 1. I pretty much just sat back and watched and followed along. There were characters I liked and disliked, and I don’t think I was actively bored. It just wasn’t a very exciting season of television. Thirteen hour-long episodes and I doubt I could tell you anything specific that happened in any of them.

It just was, and it was fine.

5. Krysten Ritter was amazing, as always 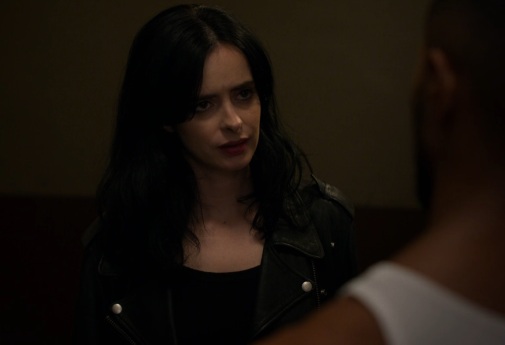 She makes it look easy!

At least Krysten Ritter remains phenomenal in the title role! I never read Alias back when it was first a comic, so my experience with Jessica Jones as a character is somewhat limited, but Ritter brought that character to wonderful and compelling life in this show. She’s angry, she’s surly, she’s a bit of an asshole, but she has a strong moral compass, she gets the job done and she shows weakness and empathy when you least expect it. Ritter has been great for all three seasons, and it’s a shame we probably won’t see her in the role again. But it is nice to think we had three full seasons of a Jessica Jones TV show.

4. I understand Trish breaking bad, but I don’t personally like it

Should have gone full Hellcat

Simply put, Jessica and Trish’s partnership has been one of my favorite parts of the entire show. I like Trish. I liked her all through season 2, even while she was spiraling downward. And she and Jessica were an awesome hero team in season 1. So seeing Trish turn out to be the real Big Bad of the season, to see Hellcat go down this dark path, just sucked.

I understand what’s happening, obviously. It all makes sense thematically and as plot. I get it, to the extent I ever understand text and subtext on TV. But man, why’d the show have to break that way? This sapped out some of the fun of season 3 for me, but it’s not a knock against the show as a whole. I just didn’t like that direction for Trish. That might be why I’m so meh about this season.

Also, Trish is the one who came up with the colorful Jewel costume in season 1 for Jessica, so why did she so adamantly turn down the comics-accurate Hellcat costume? Why did she settle on just a hat and scarf? Trish Walker’s costume should have had more personality!

Of the two major new characters, I liked Mind-Wave and I did not care for Foolkiller. Granted, neither went by those names or dressed up in any sort of costume, but we’ll get to that. Mind-Wave was Erik, Jessica’s new romantic interest, the one with the empathic power to detect evil in a person. I liked him. He was charming, funny, and just flawed enough to have a good dynamic with Jessica and a good storyline for himself. He was also super respectful and supportive in his growing relationship with Jessica, a romantic interest bereft of toxic masculinity. I liked that he wasn’t killed or turned surprise villain. He made mistakes, but he owned up to them and didn’t hold them against Jessica. He was a cool dude, and I like cool dudes on TV shows.

Whereas the villain, Foolkiller, was more boring than anything else. He was your typical cliche Hollywood serial killer, all menacing voice and super secret mission. He talked a big game, and he got in one good revenge kill, but he wasn’t anything special. He was just a serial killer that had magic plot armor to avoid getting taken down until the very end. I don’t think he brought out anything specific in Jessica, and his battles with Trish were more visceral than thematic.

And he never once decried any of his victims for being fools!

2. Now I shall turn to the comics

Show me what you got!

I’m gonna give Kelly Thompson’s Jessica Jones comics a try. They’ve been online only, and while I read most of my comics online, I don’t really check out the online only variety for some reason. But the first two storylines have been collected in tpb form and now they’re on my Amazon wishlist for eventual purchase. I want to read some solid, enjoyable Jessica Jones comics, and I’ve heard good things about these stories. So we’ll see.

Honestly, I just don’t have much to say about this season. It’s good, I’ll give it that, but it left no lasting impact on me. And as I’ve stated, some of the elements just didn’t work for me, which robbed the season of some of its power. So hopefully I can get a good Jessica Jones fix in the comics!

1. Overall, the Netflix Defenders were a net positive

Now that the entire Netflix Defenders experiment is over, I’m going to rate the whole thing as a good job overall. There were times when the shows were great, wonderful TV, and there were times when they were boring or terrible. Some shows had great seasons coupled with terrible seasons, and some remained good throughout. I think Daredevil was my favorite of the five, and I enjoyed them all to some degree — though I don’t feel compelled to go back and re-watch any of the seasons. They just exist now as part of the great Marvel tapestry, and that’s good enough for me.

I will gladly bid this era adieu and see what we have in store with the Disney+ shows. I would be thrilled if Disney decided to use some of these characters, actors and continuity going forward, but I’m not going to hold my breath or get too worked up. What will be, will be.

On the negative side, I think these shows suffered two major faults: 1.) They never went full super, and 2.) They were too focused on single-season narratives.

Yes, I could have used a Daredevil cameo, too

Aside form Daredevil’s red costume, which he only really wore for one of his three seasons, these shows rejected real comic book superheroics. And I think that was a problem. Obviously they were going for something more realistic and gritty, and that really worked in the beginning, but they should have evolved. These shows were spun off from the Marvel Cinematic Universe, which has found success in embracing the costumes and the superheroics. In a world where Captain America can dress up like Captain America, Iron Fist should be allowed to dress up like Iron Fist. These Netflix shows should have taken more cues from the movies when it came to superheroics.

The shows were also too long, of which I’m pretty sure everyone agrees. It especially hurt when the entire 13-episode seasons were dedicated to a single storyline. Then you knew the hero and villain wouldn’t really confront each other until the final episode, meaning every other episode was all about dragging it out. Sometimes this worked, like in Daredevil season 1, with the slow, awesome build-up and reveal of the Kingpin. And sometimes it sucked, like in Punisher season 2. There were seasons that tried to split things in half, like Luke Cage season 1 and Daredevil season 2, and sometimes that worked and sometimes that didn’t.

Killing Cottonmouth midway through the first season of Luke Cage was a huge mistake.

Ideally, just spit-balling here, the shows should have been more episode-to-episode, like similar genre shows in the late 1990s and early 2000s. They should have dealt with more villain-of-the-week stuff, while letting the season-long storyline grow in the background. There were tons of Marvel villains they could have used to fill episodes, or make up some original characters. And the show should have embraced the superhero trappings. Iron Fist should have had his costume, especially in season 2. Daredevil should have kept his costume around. Luke Cage should have been a bit more stylized. Jessica Jones was perfect. The Punisher should have turned those last five minutes into an entire season of killing bad guys.

Let us hope somebody out there learns all the right lessons from the Netflix Defenders. They existed. I enjoyed them, for the most part. Now I’m ready to move on and see what we get next!

← I Ordered a Henchman-4-Hire Hat!
The Blob-assaince Was Good Enough →