← 6 Other Marvel Cartoon Ideas, If We’re Gonna Get Weird With It
New Dark Phoenix Trailer Promises Another X-Men Movie →

The next generation of Pokemon games is here! Pokemon Sword and Shield will be released on the Nintendo Switch later this year, marking the very first time a main Pokemon game will come to a console instead of the Nintendo handheld.

Which is the very reason I probably won’t get to play this one.

The video looks great! The graphics, the world, the everything; it looks like the classic Pokemon game, while reveling in the true size and power of a console. It’s everything we Pokemon fans could possibly want!

Except I’m probably not about to shell out $300 for a Nintendo Switch.

Here are the new starters. I think I’m leaning towards the grass starter. Looks like a parrot/monkey hybrid. Though I’ll save my final decision for when I see their final evolutions. 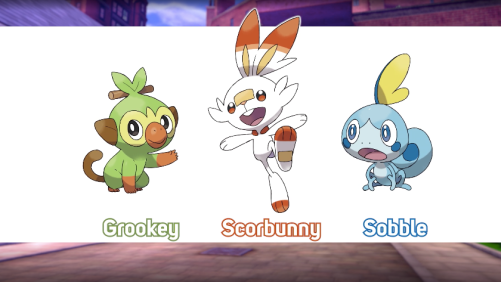 Though I’ll probably never get to play.

Look, I thought I’d sworn off consoles years ago by switching to full-time Steam games on PC. Then I went and splurged $400 on a Playstation 4 last year! Now you expect me to spend another $300 on a Nintendo Switch just so that I can play Pokemon Sword and/or Shield?

Granted, there’s a bunch of other Switch games I’d love to play, but I’m not made of money for video game consoles! And granted, I bought both my Nintendo DS and my Nintendo 3DS specifically to play the newly released Pokemon game, and rarely ever played any other handheld games. But I largely regretted spending so much just to play the new Pokemon game.

So no, this isn’t happening. I’m not buying a Nintendo Switch.

Posted on February 27, 2019, in Video Games and tagged Pokemon, Pokemon Sword and Shield. Bookmark the permalink. Leave a comment.

← 6 Other Marvel Cartoon Ideas, If We’re Gonna Get Weird With It
New Dark Phoenix Trailer Promises Another X-Men Movie →