← Oh Hey, Stilt-Man is Alive Again!
Have You Heard of Pitch Meeting? →

Welcome to the last comic book reviews of 2018! Considering it’s the week of Christmas, there simply weren’t many comics released this week. Quite strange. But I’m a man who likes to read his comics, so let’s do this anyway!

Hold your horses, Sean! Turns out, you only read two comics this week and lazily skipped over some others. So while Uncanny X-Men was a bit of a bummer, you definitely loved the wedding issue of Fantastic Four! Nuptials for Comic Book of the Week!

Meanwhile, I got lazy and skipped the first issues of the new X-Force and Superior Spider-Man comics. I don’t really care about any of the X-Force characters, and I’m disappointed that Otto went back to being Superior Spider-Man instead of his badass new Superior Octopus identity. We’ve got enough Spider-People in comics these days! Did anybody read these issues? Am I missing out? 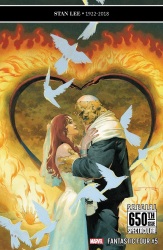 This is it! The big wedding issue! The Thing marries Alicia Masters, a marriage some 50+ years in the making! Let’s see how they pull it off!

It’s an anthology of short stories, so let’s dive right in!

In between all of the stories are smaller connecting bits, as everybody rushes around with pre-wedding prep, and gets annoyed at Reed for spending so much time in his new lab.

First up is a story between Ben and Sue, when she fills in to help him with some dance lessons ahead of the wedding ceremony. They take the time to reflect on the past, how they got their powers and how Ben met Alicia. It’s mostly narrated by Sue as she fills in her thoughts and feelings through some classic F4 scenes, putting some more context into some of Sue’s early 60s dialogue…like why would Sue Storm be so callous as to call Ben a “Thing” like that? And why would the Thing say “I’ll prove to you that you love the wrong man, Susan”? There’s also a lot of focus on Ben and Alicia’s early courtship. It’s a very nice bunch of flashbacks.

The second story is the bachelor party, in which Johnny Storm gets a bunch of friends and heroes together to paint the town red. They attend a UCW wrestling show in Madison Square Garden, where the Thing (a former champion) is invited into the ring to join in…only to pull his groin in the scuffle. Then they all go get drunk at a local watering hole, with the female members of the Serpent Society jumping out of the cakes to get into another brawl. Then everybody settles in for some strip poker, where Thundra snookers the lot of them, leading to another brawl. The night ends with Johnny and Ben sitting on the curb having a nice chat, with Ben assuring Johnny that he’ll find true love someday.

Lastly, everybody flies out to Arizona for a small, family-only wedding ceremony (including Aunt Petunia!). During the ceremony, Doctor Doom makes an announcement to the whole world, bouncing it off the very atmosphere, claiming that Galactus has started attacking Latveria, and that he’ll take care of it. The Fantastic Four are ready to cut the wedding short and leap into action, but Reed stops them all. He was so busy in his lab earlier because he was working on his wedding gift: a time stopping device, because he knew some sort of super-villain catastrophe was going to strike during the wedding. So he made sure they’d be able to pause that villain thing and finish the wedding without needing to run off.

Ben and Alicia read their vows and say their “I do”s and the wedding is complete!

And then they rush off to fight both Doctor Doom and Galactus, because of course.

What a nice wedding issue! All of the stories are nice, delivering a solid journey through the life and times of Ben Grimm and the Fantastic Four. I would have liked a bit more with Alicia, because now that I think about it, Slott hasn’t done very much with her yet in his short run. And it’s her wedding, too. But Slott is an old hand with the Thing, having written his solo series back at the start of Slott’s career with Marvel. And, as has been the case with his short run so far, he nails everything there is to nail about the Fantastic Four. The family dynamic is wonderful, the emphasis on camaraderie and good times is delightful, and the whole shebang comes together with style, humor, grace and heartfelt honesty.

The Allreds are pretty much perfect

First of all, Reed’s moment of brilliance was great. We obviously knew he was up to something when they kept trying to shame him for not being a bigger part of the wedding prep. And when he simply said “No” to the idea of the team rushing off to fight Doctor Doom, like you knew would happen, it was a powerful moment. For a second there, I was expecting him to just say, “The world will survive for another couple of minutes without us”, but then to have him reveal why he was so distracted was great. His declaration that protecting the moment of the vows became his “highest priority” was damn good stuff, and it paid off wonderfully. 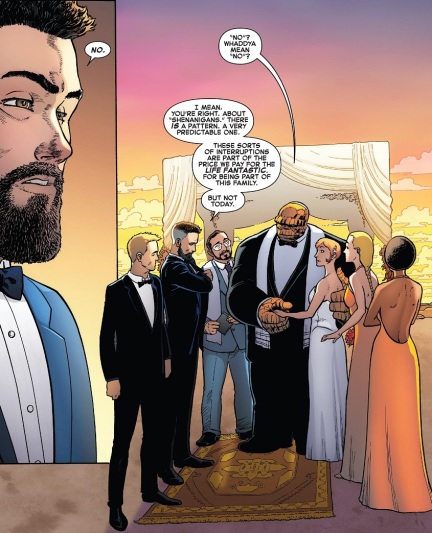 The world can wait

The smaller stories were great, too. Sue helping Ben with dancing lessons was delightful, putting emphasis on a pairing we don’t see too often. And the Allreds’ take on the classic Fantastic Four #1 scenes was beyond exciting. The way they recreated the panels in their own style was just aces. I also enjoyed the way Slott used Sue’s narration to iron out some of the panels in that seminal work, and how they don’t exactly match up with the Fantastic Four as we know them. It was a fun way to use those classic scenes to inform this comic, rather than just do a straight flashback or remake. And re-doing the classic scenes of Ben and Alicia’s courtship helped flesh out their love more and carry the Alicia character weight — though again, I wish we saw more of her in the present day. A quick one-page joke about Alicia and her girlfriends at a strip club was funny, but not enough. 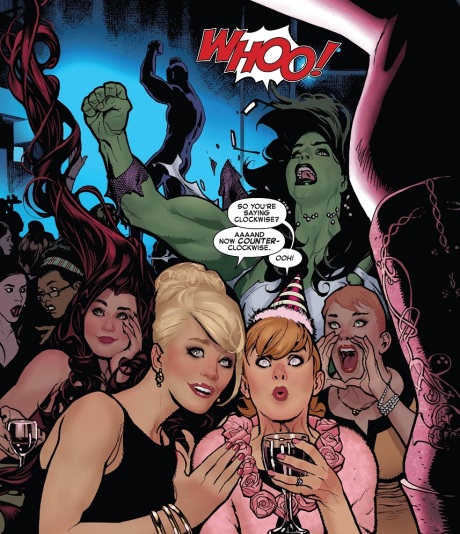 My mistake! I think this is Adam Hughes and not Greg Land. Hughes does the rest of this story, this art just looked wildly different.

The rest is fun, too. Bachelor party with all of the super people, a silly fight with the Serpent Society, and a really nice, heartfelt moment for Ben and Johnny. I miss the days when they thought Reed and Sue were dead, and Ben and Johnny were grieving in their own ways. Those were some great comics. But it’s just as great to see everybody together again, with Slott using these parties to start up some drama based on the Human Torch being unable to find true love. He’s dated or nearly married pretty much all of the supporting women in the Fantastic Four’s circle, and Slott uses that to hopefully fuel some drama going forward for the Torch.

TL;DR: The big Fantastic Four wedding easily lives up to all of the hype and excitement, though I would have liked more character focus on the bride. 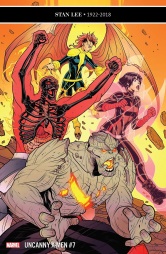 Let’s change things up and make them less interesting!

X-Man and the four Young X-Men have spent months in the Age of Apocalypse, and they’ve split into two sides: Armor and Glob want to help an underpowered X-Man find a way back to their world, while Pixie and Rockslide want to kill him so that he doesn’t go back and end the world. This all culminates in a fight in an abandoned factory, where Pixie convinces Armor to kill X-Man.

This is where Uncanny X-Men went off the rails. The story changes gears so abruptly, so wildly, that all momentum is gone and we’re stuck in a far less interesting story. The story of the Young X-Men has been a good one so far, but this issue isn’t even about that anymore. Now they’ve got a bunch of new, far-less interesting problems to deal with. And overall, it’s just not that interesting a story. Pitting the Young X-Men against one another doesn’t carry any gravitas, especially when the conflict is so superficial. Let’s break it down a bit:

This feels like a cheap use of the Age of Apocalypse. The whole point of that story was seeing alternate versions of our favorite characters. But here, it’s still the same Young X-Men, they’ve just been teleported to the AoA and given new looks. So there’s not even a novelty to enjoy. And nothing in this issue really feels like these teenagers have spent months in the AoA. Really? Months? That was an unnecessary time jump that will likely have no greater effect on these characters.

New Glob is just Fever Pitch with more mucus. Or are they setting him up to be Holocaust?

And then Hisako’s mind is changed so easily? There have likely been plenty of big arguments and fights over the past few months about what to do with X-Man, not to mention her position on the matter back in the normal timeline. But one encounter with Pixie and she suddenly changes her mind? And that’s the big issue cliffhanger?

This issue doesn’t do much to explore these characters or continue their story, instead putting them in an entirely new, less interesting situation and then playing light with the stakes and the consequences of that change. Not to mention dropping all of the other storylines from the first six issues.

TL;DR: The new issue totally wastes a trip to the Age of Apocalypse, derailing everything that had been ongoing up until this issue.

← Oh Hey, Stilt-Man is Alive Again!
Have You Heard of Pitch Meeting? →