← Check Out This Nifty Star Wars Thing!
A Personal Reminder That Some of My Favorite Obscure X-Men Are Alive and Being Treated Well →

6 Characters I Want to See on DuckTales

The first season of the new DuckTales cartoon has come and gone, but that’s not going to stop me from wildly speculating and gesticulating about what I want to happen next. I’ve been pretty vocal about my hopes and dreams for the Expanded Disney Cartoon Universe. With today’s List of Six, I’m going to solidify those hopes and dreams even more!

The first season of the new DuckTales was chockfull of cameo characters. We had Gladstone Gander, Doofus Drake, Goldie O’Gilt and more classic characters getting new, rebooted appearances. As a fan of classic Disney and duck-related cartoons, this was a real treat…and there are so many more options for season 2!

Join me after the jump for the classic Disney and DuckTales characters I want to see in future seasons of the new show! And share your own hopes and dreams in the comments!

Just go for it, Disney! Are you saving Mickey Mouse for his own young adult cartoon series? DuckTales has a pretty cool world going for it. Drop Mickey Mouse in town and just be badass about it. Come up with some awesome Mickey Mouse backstory. Do whatever you want. Just have the guts to do it! Both Donald and Goofy had cartoons in the 90s, and they get leading roles in the Kingdom Hearts video games. Give Mickey something fun to do for once! Donald Duck is a major character in DuckTales, so let’s see his pal Mickey pay him a visit!

It’s all in the ears

If you don’t want to do Mickey, how about an even deeper cut? Oswald the Lucky Rabbit was the proto-Mickey, and Disney got the rights back a few years ago. He’s a fascinating historical factoid and an appearance in DuckTales would be a really neat chance to explore the character. I don’t know what the show could do with Oswald the Lucky Rabbit, but they should do it. Just for the kicks and giggles, if nothing else.

Much like with Mickey Mouse, Daisy would be a great addition to flesh out Donald Duck a lot more. How would Donald’s longtime girlfriend fit into the world that DuckTales has created? Donald spent the past decade or so raising his nephews as his own. Was Daisy around for that? Was she around when Donald was a world-traveling adventurer? Does she have history with Huey, Dewey and Louie as well as Donald? And maybe even Scrooge? Let’s find out! 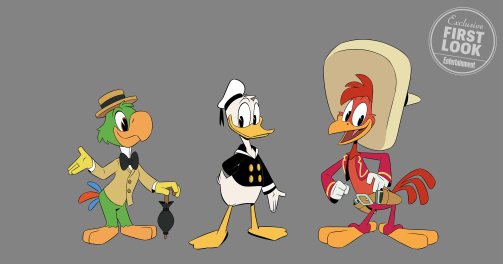 We all make mistakes

Update: Good news, everybody! I have since learned that the Three Caballeros are already scheduled to appear in season 2! And I am too lazy to switch them out for a different entry! So enjoy this official art and my original entry, suckas!

If we’re talking characters who can flesh out Donald Duck — and apparently I am, looking back at my list so far — then the Three Caballeros are a must. Released all the way back in 1944 in Mexico, The Three Caballeros was the first Disney movie to combine live action actors and animated characters. It featured Donald Duck hanging out with his pals José Carioca, the Brazilian parrot, and Panchito Pistoles, the pistol-packing Mexican rooster. Part of me wants to believe they were some type of Three Musketeers or Three Amigos style group. Regardless of the actual movie, José and Panchito sound like exactly the sort of international adventurers that Donald would meet in the DuckTales backstory, and they’re definitely the sort of guys who should show back up in the modern day to reconnect with their old pal!

2. The cast of TaleSpin

The stuff dreams are made of

I’m fairly certain this one is definitely going to happen, I just want them to get on with it already! Don Carnage himself had a big episode in season 1. Cape Suzette has been referenced several times. And we saw a picture of the Sea Duck itself! I want this crossover more than I want to see some upcoming Marvel movies. This single event will justify my childhood 100%. So make it happen already! 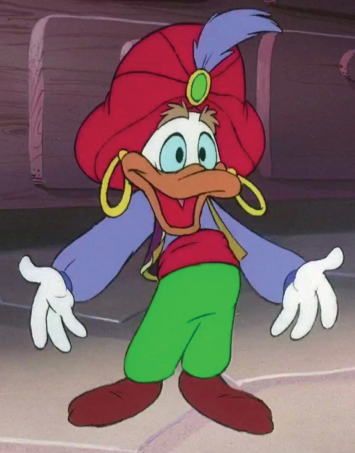 Along with being a big fan of the DuckTales cartoon back in the day, I also really enjoyed their movie: Treasure of the Lost Lamp. In the movie, Scrooge and the kids find a magic lamp, and the kids befriend the genie inside, who poses as a boy named “Gene” — despite having the voice of Rip Taylor. Gene the Genie would make for a fantastic episode and possible supporting character. Rip Taylor is even still alive if they want to keep the voice. But the movie also gave us the fantastic villain Merlock, and his lapdog sidekick Dijon. Lots of good characters available for a solid movie revival episode!

← Check Out This Nifty Star Wars Thing!
A Personal Reminder That Some of My Favorite Obscure X-Men Are Alive and Being Treated Well →