← What Does Woody Harrelson Have Against Apes All of a Sudden?
The X-Men Need a Wild Storm →

Happy April Fools’ Day! I don’t have any tricks planned for you, but I personally enjoy scouring the Internet for all the best gags and games and giggles. I also enjoy reading comic books!

Since this was a Fifth Wednesday, there weren’t a lot of new comics out this week, at least few that I’m reading. So there are only a couple of reviews this week — which is fine, because it gives me more room to gush about Spider-Woman #17, the Comic Book of the Week! It’s the final issue of the series and an early contender for my favorite single issue of the year!

Superheroes know how to party right, with bean dip

This week also sees the releases of X-Men: Prime #1 and Inhumans: Prime #1, the kick-offs to their respective new status quos following Inhumans vs. X-Men. I’ve read and reviewed X-Men: Prime down below, because I’m always open to giving the X-Men another chance. But I won’t be touching the Inhumans with a 10-foot comic book pole.

The Doctor Doom as Iron Man saga continues with a quieter issue that makes me wonder where all of this is going.

After a flashback to Victor and Reed’s college days, Doom continues his vigilante streak by taking on the Wizard. But Bentley is just clever enough to distract Doom and get away, leading to a fight outside. During the battle, Doom is distracted by a sudden vision of a bright, glowing city/machine made of light. Wizard is then able to sneak attack him and get away. When Doom’s armor shuts down and he crashes, Sharon Carter, the new Director of SHIELD, attempts to arrest him. Doom is able to stall her enough to get away.

Meanwhile, when Riri Williams sees a news report that someone else is going around fighting bad guys while dressed as Iron Man, she suits up and heads out to investigate.

Issues like this one make me wonder what Bendis and Marvel are up to. Doctor Doom as Iron Man is not a status quo that’s going to stick around forever. It’s not like we’re really reading about the new Iron Man. To that end, this has got to be some kind of mini-series. There’s surely an end point in mind. And issues like this one just don’t seem to add much to whatever ongoing story is taking place. It’s weird. This is a fine comic, to be sure. I already like Bendis’ take on Doom, and seeing him actually struggle against a villainous opponent is fun, as is Doom one-upping Sharon Carter. It’s all fine. Even the flashback was neat. And I look forward to Doom reacting to Riri Williams. But on the overall, bigger picture sense, what is this issue even doing? Is Bendis telling a story or is he just strolling along filling pages?

TL:DR: This is another fine, enjoyable and entertaining issue of Infamous Iron Man, but it seems so insignificant that I find myself wondering what this comic is trying to accomplish.

Why do the things we love have to go away? Why does Dennis Hopeless’ amazing Spider-Woman comic have to come to an end? Why can’t we have nice things forever?!

Jessica Drew throws a rooftop party for all her friends to show off her new boyfriend, Roger Gocking, the Porcupine. They’re nervous, because Roger is a former D-list super-villain. No sooner do the guests (Avengers) arrive than Roger has to rush downstairs to take care of the baby, leaving Jess alone on the roof suffering the withering stares and whispered comments about Jess dating a loser like the Porcupine. This comes to a head when Jess has to face-off against Natasha the Black Widow, who is super passive-aggressively concerned that not only is Jess dating a clown, but she’s slumming as a P.I. instead of doing some good as an Avenger.

Jess gives a big speech to everybody about how she cares for Roger, how great a guy he is, and how she’s finally happy with her life for the first time in forever — a speech that is cut off by the fact that Baby Gerry has developed spider-powers and has climbed up to the roof (with a desperate Roger in tow). The various heroes try to lend a hand and grab the baby, but Gerry is a slippery bugger, and only Roger can talk him down.

But then Gerry slips off the edge of the roof! And Roger jumps off the roof after him! And Spider-Man saves them both.

Once they’re back on the roof, Roger tells a worried Jess that he didn’t hesitate to jump off a roof to save Gerry because he knew he could trust her hero friends to save them, and he didn’t want Gerry going down alone. They kiss, and everybody can now see how great Roger really is.

Then Jess, Roger, Ben and Carol head downstairs to the apartment to take care of the baby. Once he’s in a new, safer crib, they relax on the couch and decide they’re just going to relax with each other for the rest of the night — leaving all the various superheroes up on the roof to just keep partying, at least until the wine runs out.

If more comics had issues like this one sprinkled throughout, I would be the happiest comic fan in the world. Spider-Woman #17 is a defining example of my own personal creed: “People first, superheroes second”. Issues like this one — where the characters are treated like real people with real lives and real emotions — make reading comic books worth it. Yes, they’re all superheroes, and most of them are in costume this issue, but Hopeless perfectly blends that superhero stuff with just a casual get-together with friends, where they gossip and joke and bicker and where Spider-Man is just the best.

So many spider-people around one table

This issue is so clever, the dialogue is so wonderful, the emotional beats are so personal and evocative, the characters are so likable and lovely, the art is so perfect; this is one of the most heart-warmingest comics I have ever read. If Jess and Roger aren’t somehow a permanent couple going forward, or some hack future writer breaks them up off-panel, I’m going to be a sad panda.

Spider-Woman has been a great comic, a true gem. This is a glorious example of what can happen when you let a creator actually tell a story and not worry too much about crossovers or Big Events or editorially-mandated whatever. Hopeless created real characters here, and he used the ongoing nature of comics to build relationships and plot lines, to build character growth and let it pay off in really special ways. It’s not flashy — and I guess, based on the cancellation, it doesn’t sell — but Dennis Hopeless’ Spider-Woman is comic books done right.

TL;DR: Spider-Woman comes to an end with its best issue yet, celebrating the character growth, humanity and grounded superheroics that made this series so awesome. 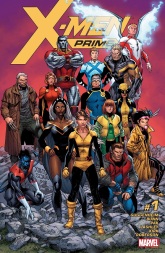 I haven’t read an ongoing X-Men comic for about a year now because I just wasn’t interested in their post-Secret Wars status quo. I’ve always loved the X-Men, and I’m going to give ResurrXion a try. Maybe I’ll find something I like, maybe I won’t.

Not that it matters, because we’ll just get a new status quo change in a year or two anyway…

In the wake of Inhumans vs. X-Men, the mutant race is no longer facing extinction, which means the X-Men no longer have to worry about daily survival anymore. They’ve got a random smattering of X-Men and X-Students hanging around these days, but no real direction. So Storm asks Kitty Pryde to return to the X-Men (she’s been hanging out with the Guardians of the Galaxy recently) to help give them some direction. Kitty decides to set up a new school in the heart of Central Park so that the X-Men can stand tall as superheroes.

Meanwhile, Lady Deathstrike has been forcibly recruited by the new Weapon X program. And the Young X-Men — who recently found out that they might not actually be from the 616 past — have decided to go off on their own.

Yeah, this was a pretty solid new foundation for the X-books going forward, though I don’t think Marvel established anything particularly compelling. After years of relaunches and status quo shake-ups, I think the X-Men franchise is in need of something big to really get a proper start again — big and positive, I mean. No more of this dreary extinction stuff. The X-Men have the building blocks for some great comics, they just need to be properly used. Maybe ResurrXion will see it happen, but I have yet to be truly reassured about what we’re going to get, and this issue doesn’t provide. The only real change to the X-Men, it seems, is that they’re going to base themselves in Central Park. And…can they do that? Can you just build a school in the middle of Central Park?

Anyway, I’m just not that excited for ResurrXion and nothing in this Prime issue really lights my fire. The Young X-Men have long outstayed their welcome, but Marvel is just giving them yet another comic relaunch, which is, like, their third one at this point. The main X-book, X-Men: Gold, seems like it’s just going to be a generic X-Men book with a generic lineup. I don’t care about a new Weapon X. Nothing about the newly announced Astonishing X-Men interests me. It’s like Marvel is just going through the X-motions. It doesn’t help that all the best X-Men — Wolverine, Cyclops, Professor X, Jean Grey and Multiple Man — are all dead. And it doesn’t help that these constant relaunches destroy any ongoing character or story growth so the still-living characters can’t form a new foothold.

Anyway, I’m looking forward to Generation X and Iceman. Hopefully those will be good comics.

TL;DR: If you love Kitty Pryde and/or the current lineup of X-Men, then the new status quo might be perfect for you. I’m not particularly a fan of either, and nothing about ResurrXion has gotten me excited yet, including this Prime issue.

← What Does Woody Harrelson Have Against Apes All of a Sudden?
The X-Men Need a Wild Storm →