Brrrr, it sure is getting chilly outside. I don’t know about the rest of you folks, but here in Central New York, it gets cold in the winter, and it gets cold fast. I’m going to have to break out the winter coat soon. So how about we delay the onset of Jack Frost with a little bit of fire! Hot, sweltering fire is exactly what we need!

I could totally go for some s’mores right now

I tried this once before with snow and ice-themed comic book characters, but who wants to think of something like that on a chilly day like today? Let’s get roasty toasty with some scorching hot heroes instead! 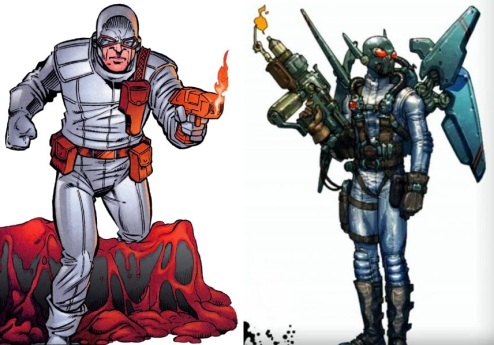 Apparently all it takes to become a super-villain in the DC Universe is a little pyromania and a clever way to ignite the stuff. Both Heat Wave and Firefly are normal guys who just went a little nuts and found some creative ways to hurl flames at superheroes. Heat Wave is Mick Rory, and he loved fire as a kid. So much so that he created a flame-throwing gun, put on a mask and decided to become a super-villain. He usually fights the Flash, based almost entirely on proximity, since they’re both from the same city.

Firefly is a Batman villain, and at least he can fly. Garfield Lynns is a bit crazier than Mick Rory, because Garfield thinks he can see visions in the flame, which fuels his obsession with fire. He originally chose the name ‘Firefly’ because – I kid you not – Batman once mistook a simple firefly for Lynns’ lit cigarette and chased the firefly while Lynns got away. Some world’s greatest detective. Lynns later designed a whole suit of armor with the firefly-motif, and now he buzzes around setting buildings on fire as he battles the Batman. Everybody needs a hobby.

A lord of fire, you say? Well hot damn! Firelord is the alien Pyreus Kril, because the universe loves a good pun. He was chosen by Galactus, the world-devourer, to be one of his heralds, and was granted cool fire powers and a flaming staff. Silver Surfer got a surfboard, Firelord gets a staff. Like most heralds, Firelord eventually grew tired of the gig and quit, and now he spends his time just being an awesome, powerful, semi-heroic, cosmic demigod, which I consider to be a pretty great career path.

Japanese flag on his forehead? Check!

Not all superheroes are nice guys, some of them, like Sunfire, are assholes. Shiro Yoshida is a mutant from the X-Men line of comics, and joined the team alongside Wolverine, Storm and some of the other more popular characters. But Sunfire didn’t stick around long, because, as I said, he’s kind of an asshole. He should have reconsidered their offer, though, because Sunfire hasn’t done jack squat since. For decades, he has been relegated to the back issues, showing up here and there whenever some superhero visited Japan or some new superhero team needed to round out its membership. Sunfire has been linked with Alpha Flight, Apocalypse, Big Hero Six, and most recently is a member of the Avengers – which will last until a new writer comes along and decides not to bother with Sunfire anymore. But at least I think he’ scool. 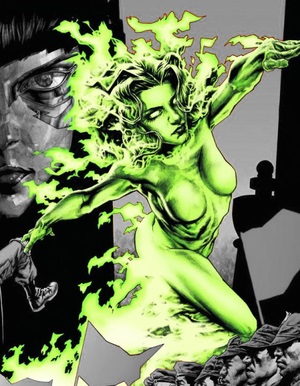 I was getting a little tired of orange

Say what you will about this hot Brazilian babe, but at least Fire thinks outside the box – though she stopped when it came to her superhero name, apparently. Beatriz da Costa was a Brazilian showgirl and model before becoming a secret agent – like you do – and she got her powers when she became trapped in something called a pyroplasmic explosion. Why the explosion turned her flames green is anybody’s guess, but she flaunts it like nobody’s business. Fire and her BFF Ice (one guess at her powers) joined the Justice League International for awhile and mostly kick around on the fringes of the DCU, despite being both literally hot and legitimately hot. Fire also holds the distinction of being one of the Justice Leaguers to appear on that horrible live-action TV show from 1997.

Jump to 1:50 into this video and see for yourself.

That was filmed in 1997, people! Only one year before Blade came out in theaters and changed live action superheroes forever. Thank God for that. Though I doubt Fire will be getting her own show on The CW anytime soon. 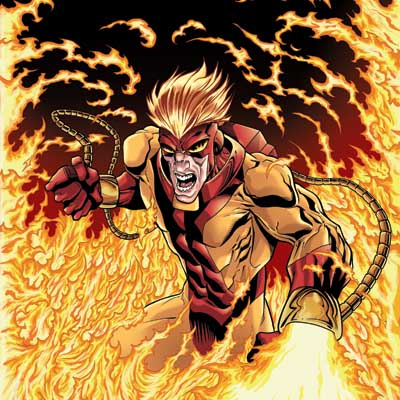 The best in wearable flamethrowers

Those X-Men and their love of fire! Pyro is St. John Allderyce, a mutant super-villain so cool that he got his own story arc in the X-Men movie trilogy. He also got to star in arguably the coolest scene with Magneto in X2: X-Men United. (Ugh. Why is that garbled mess the name of the best X-Men film?) Anyway, Pyro is an old school super-villain who spent most of his career pestering the X-Men here and there in one scheme or another. He’s got the fun power of being able to sculpt fire, turning flames into fun shapes as opposed to throwing them at people. So at least when he wears a flamethrower on his back, you know he’s going to do something special with it. 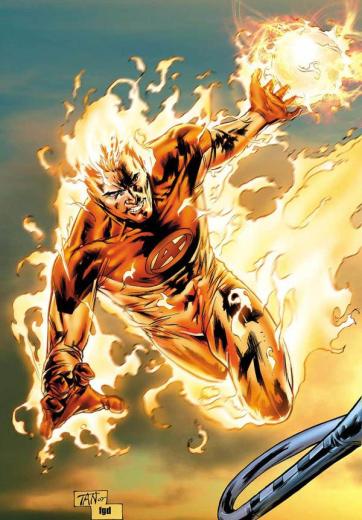 Characters don’t get much more classic than Johnny Storm, the Human Torch. He’s the archetypical hot headed youth who loves cars, loves women and loves toasting the bad guys. As a founding member of the Fantastic Four, Johnny has been disappointing his family and getting up to shenanigans since the dawn of the Silver Age. He’s also the poster child for keeping your kids away from matches.

I’ve always felt his name could use a little work, but in this day and age, any name even remotely fire-related would come off as horribly cliche. He’s just going to have to keep rocking that retro charm.

Or rocking in general. Have you ever heard him sing?

Do you regret it now?