Happy Easter Weekend, everybody! If you celebrate! For me, it’s just another good excuse to go home and visit with my folks and whatever family shows up for dinner. Should be fun.

You know what else is fun? Comics! Lots of diverse comics this week, mostly from DC. They gave us another chapter of Doomsday Clock, and the Power Rangers comic kicked off their first Big Event with Shattered Grid! But Comic Book of the Week goes to the final issue of Dark Knights: Metal for being all manner of intense comic book insanity. 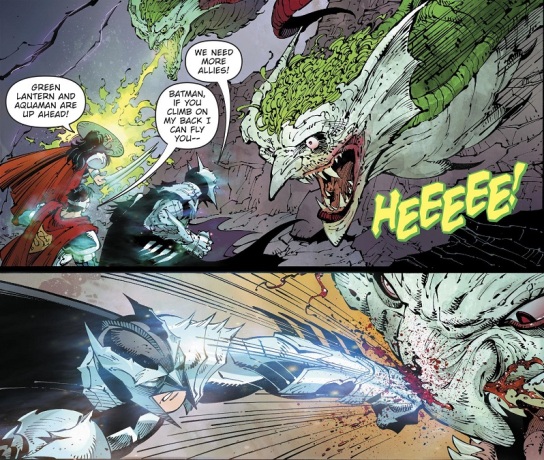 Meanwhile, Marvel announced the return of a proper Fantastic Four comic, like we all knew they would eventually. It’s only been about two years and Marvel did very little with the missing team — though what they did do, with Brian Michael Bendis’ Infamous Iron Man, was phenomenal! I don’t particularly care about the Fantastic Four, but I’ll definitely pick it up, since the creative team is Dan Slott and Sara Pichelli. If Slott can do for the Fantastic Four what he did for Silver Surfer, then I’ll probably fall in love all over again.

Also, I read Green Lantern: Earth One this week and it was really good! Solid re-imagining of Hal Jordan and his Green Lantern origins.

END_OF_DOCUMENT_TOKEN_TO_BE_REPLACED

I’m still over the moon that we’re getting a new Multiple Man comic book. I don’t know much about this Matthew Rosenberg fella, and I’m slightly disappointed that it isn’t me writing the new Multiple Man comic, but you’re can be darn sure I’m going to read it all! And review it right here!

Some pretty solid comics this week, from Detective Comics to Batgirl to a couple more of DC’s new titles. I’d been waiting to check out The Terrifics and it did not disappoint. But Comic Book of the Week goes to All-New Wolverine for a delightfully funny done-in-one issue.

Speaking of new comics, Marvel has officially announced Nick Spencer as taking over Amazing Spider-Man. I don’t have anything to do with the guy’s Twitter feed or whatever brouhaha erupted during Secret Empire, but I really liked his Ant-Man and Superior Foes comics, so I’m definitely on board for his Amazing Spider-Man.

END_OF_DOCUMENT_TOKEN_TO_BE_REPLACED

This was a weird week in comics. Some weeks, all my favorites come out and I get flooded with so many fun comics to review! And then we get weeks like this one, where none of the new Marvel Comics are ones that I read, or that I’m so far behind on that I can’t review, like All-New Wolverine (which remains excellent). And since it was a Fifth Wednesday, DC mostly put out Annuals, which I’m never all-too thrill to review. The Detective Comics Annual has an origin for James Tynion’s Clayface, so at least there’s that.

But of regular, meat and potatoes comics that I actually read, there was really only the new issue of Harley Quinn for me this week! It’s an improvement over the previous issue, but I’m going to give Comic Book of the Week to the first issue of The Silencer, one of DC’s new wave of titles. I applaud DC for releasing a wave of comics with almost entirely new characters — even if I haven’t been too tickled by the lineup personally. The Silencer could be fun, though.

Honestly, All-New Wolverine should have won. I’ll get back to reviewing it next issue.

Meanwhile, I really, really don’t care for Dark Nights: Metal, which saw a new issue drop this week. It thinks it’s so clever, fiddling with DC continuity on the fly and treating it like  kibble for fanboys. But DC continuity is so malleable right now, after the New 52 and Rebirth, that none of this stuff matters. Martian Manhunter shows up in a surprise appearance, and I was left scratching my head as to when the last time Martian Manhunter mattered or had solid continuity. How is his sudden arrival supposed to mean anything if we don’t know where he’s arriving from? Or why his arrival is sudden?

It’s stuff like that, plus the general idea that the villains are just a vague, omnipresent evil that can be anywhere, do anything and beat anybody…until they can’t and the heroes win. No thanks.