Harley Quinn is Getting a Birds of Prey Inspired Comic!

I was a huge fan of the Amanda Conner and Jimmy Palmiotti run on the Harley Quinn comic a few years ago. I haven’t been following Harley’s story since then, so I don’t know what she’s been up to. But now we know that Conner and Palmiotti are coming back to the character for a new Black Label mini-series next year, teaming up Harley with her Birds of Prey movie co-stars!

Harley Quinn and the Birds of Prey comes out in February! 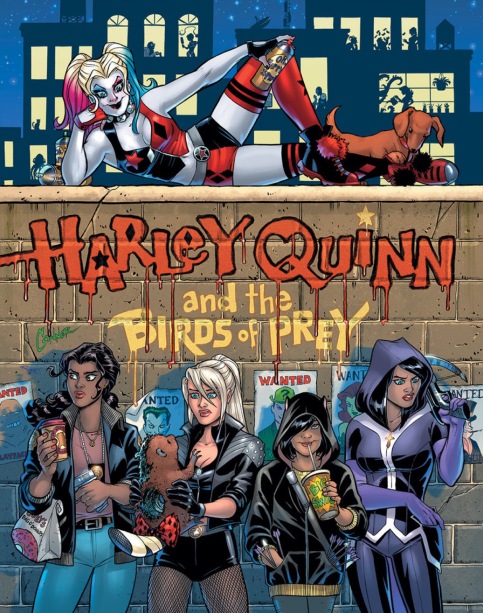 A very comics take on the upcoming movie cast

The most exciting news of all is that Conner will be doing interior art! That’s all I ever wanted for her original run on Harley Quinn. Conner is one of my all-time favorite comic book artists, and having her do interiors will be a dream come true.

I am legit excited about this comic and I hope you are too!

The Flintstones by Amanda Conner

DC Comics has announced a huge new wave of Hanna-Barbera comics coming out later this year. But unlike the regular, old licensed comics that I’m always surprised are still being sold, DC is reimagining these classic comics with new, potentially interesting twists. There’s Scooby Apocalypse, which is self explanatory, and Wacky Race Land, which looks like it’s going to put the Wacky Races into a Mad Max-style wasteland. Entertainment Weekly has all the details.

Honestly, these sound just insane enough to maybe be interesting. Mostly, though, I wanted to show off this awesome picture of the Flintstones by one of my favorite comic book artists, Amanda Conner.

It just looks so totally perfect

It’s just so…totally Conner. It’s gorgeous. I’m not about to read a comic about the Flintstones, but that picture was too great not to share.

I have no idea, but I applaud creativity nonetheless.

Nobody panic. Deep breaths. Calm yourselves. I’m just as shocked as you are. Batman Eternal has just released the single best issue of it’s entire 40+ issue run so far. It came out this week and it is very, very entertaining. It helps that Batman Eternal #43 forgoes any focus on the ongoing story and instead delivers an issue where Stephanie Brown and Harper Row hang out and talk about the coolness of Catwoman, but still, it’s progress.

I can’t believe I’m going to say this…but Batman Eternal #43 wins Comic Book of the Week. Wow. That took a lot of effort. There are a ton of very good comics this week, plenty of enjoyable reads. But when I really thought about it, I had to give it to Batman Eternal, because this team-up is a revelation.

Spoiler and Bluebird need to get their own comic after this. They need to go on to team up all the time, the new crime-fighting buddies of the Bat-family. These two need to be the new foundation for the Birds of Prey. Throw in Red Robin for some love triangling and you’ve got the sort of comic that could really matter to people.

I can’t tell if this is a good day or a bad day for comics. Batman Eternal…winning Comic Book of the Week…man. I just don’t know anymore. I can’t even.

While we’re adjusting, feel free to check out my review of Uncanny Avengers #1 over at Word of the Nerd. It was a relatively mediocre start.

END_OF_DOCUMENT_TOKEN_TO_BE_REPLACED

Like the gravitational pull of a black hole, the closer we get to this weekend’s San Diego Comic-Con, the faster comic book news is going to be coming out. One of the first new series to be announced is a new Harley Quinn solo series, written by Jimmy Palmiotti and his wife Amanda Conner, who is probably the best comic book artist in the business today.

Why she isn’t automatically drawing this series, I do not know. But at least she’s drawn the first cover!

The classic costume is sorely missed

I’ve always been lukewarm towards Harley Quinn, but I am red hot towards Amanda Conner, and her husband. They were the creative team that kicked off the Power Girl series before the reboot, and that was a lot of fun. So I’m excited to see what they can do with Harley Quinn…and I hope Conner draws the book. I mean, come on!

The series was announced at Comic Book Resources, which also had an interview with the pair:

Palmiotti: She is the hero in her own story. What happens, who gets killed, what house gets burned down and so on, well, thats just part of her story. She looks at the world differently and we will be building on that and looking even closer on her past and what makes her tick. There are so many layers to this fantastic character that we cannot wait to explore.

Conner: Like Jimmy always says; A villain almost never believes that they are the bad guy. They usually think that they’re doing something for the greater good, or that they’re downtrodden and trying to overcome their repressors, or more than likely, they just want something.

So what do you guys and gals think? Does this series sound like something you want to read? Do you still like Harley Quinn in the New 52 universe? Sound off in the comments!