Huzzah and hooray! We have new comics from places I like again! The industry is not yet back to full speed, but I’ll take what I can get these days. You’d be surprised what I’ve ended up watching to support my movie review podcast. What’s that? You haven’t listened to my movie review podcast yet? Well, shucks.

Anyway, enough of that self-plugging, let’s talk comics! This week saw the release of new issues of Go Go Power Rangers and Marauders, both comics I very much enjoy. Of the two, I think I liked them both equally. Both were solid comics. But let’s give Marauders the spotlight this week because it’s good to have X-Men comics back! 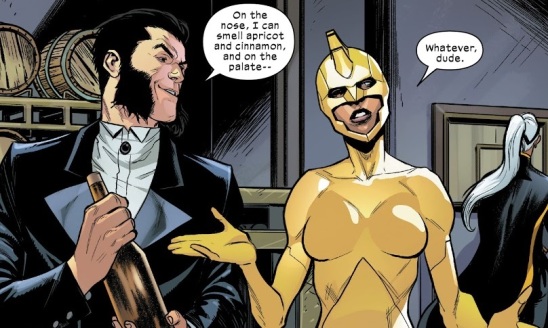 Meanwhile, life continues as expected in these quarantine times. The world continues to spiral out of control. Racial unrest has reared it’s ugly head again. And I finally got around to watching the second season of Infinity Train from Cartoon Network. Good stuff! Now I’m checking out Space Force on Netflix. 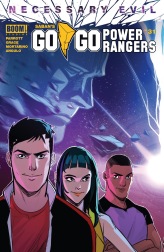 It’s good to be back with Power Rangers comics! Though this issue in particular is more about moving pieces and story bits along. It’s still nice.

Jason, Zack and Trini capture the next Grid-powered alien, learning to use the prison pot method. Kiya lends a hand. When they see the true scope of the task before them, they return to Earth to figure out their next step. Trini has lunch with Kimberly. Zack spends some time with Billy. And Jason goes home to check on his dad, who has multiple sclerosis (I don’t remember if we knew this or not, because I just thought he was drunk). Jason is worried about his dad, but his dad refuses to let Jason throw his life away in some bid to be a devoted son. This is the push Jason needs to devote himself to the Morphin Grid issue full time, so he, Zack and Trini tell Zordon they’re quitting to do the peace conference thing.

Meanwhile, we also check in on the Ranger fight from last issue, when Zedd’s forces stormed Promethea. Tommy combined the White Tigerzord with Grace Sterling’s Mechazord to win the day, while Kimberly and Billy stopped Squatt and his squad from stealing a green power dagger — though ultimately it was Grace who destroyed the dagger rather than let the bad guys get it. We don’t know what the dagger was for, but it seems to have some connection to Zedd’s latest project: Serpentera!

OK, I’ll spare you all the excited tangent I was going to go down after reading this issue, because I did a whole separate article on it earlier this week. The revelation/retcon about Serpentera is blowing my Power Rangers fan mind here. That is brilliant retconning of existing material. And it’s a good example of why I love these Power Rangers comics so much. Beyond that retcon, this was another solid issue that keeps the various balls in play moving. But I’m afraid we’ve reached a point in this comic, and its sister comic, where it’s time to take the shot. This storyline feels like it’s been all build-up since forever ago. And I’m not entirely sure what we’re building towards. I think we’re on the verge of catching up to Mighty Morphin Power Rangers, which will be fine, but surely Go Go Power Rangers has some big finale planned, right? 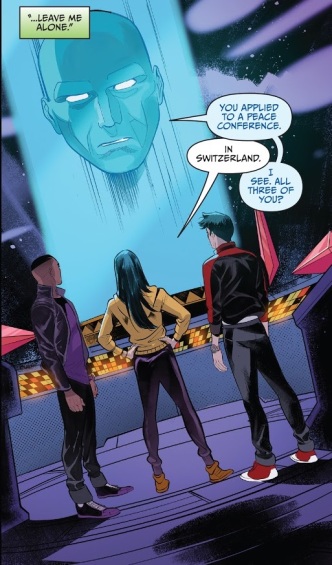 Even if it doesn’t, that’s fine too. But this issue doesn’t exactly find lightning in its telling of a story that probably didn’t have to be told. The three focus Rangers fight a monster so generic its just an angry animal, so it doesn’t get dialogue. And Kyra helps out, because she’s somehow got to transition from hanger-on to Blue Omega Ranger. But all of that was established by simply seeing her as the Blue Omega Ranger back when they debuted. It seems the story of her joining the team just isn’t very interesting since the result is a foregone conclusion. The drama of Jason, Trini and Zack struggling with their decision would have been stronger…if we hadn’t already seen them fully committed and fully in action as the Omega Rangers for several months now. It’s a weird balance that this series is no longer hitting, hamstrung as it is by the weird nature of its release schedule.

When are we going to get the Omega Rangers factory?!

TL;DR: A solid, enjoyable issue is still hamstrung by telling a story that apparently didn’t need to be told. It feels like we’ve been running in place for a while, even as fun and exciting things keep happening in this comic. 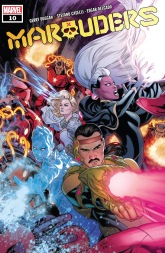 The first X-book to release since the pandemic and its a Marauders comic! Fun!

The Marauders go to war by hijacking a Russian ship in order to seize all of their power-suppression technology and to rescue an old co-worker of Forge’s, who likely used his photographic memory to memorize how to build Forge’s old tech. Iceman creates an iceberg in the ocean to halt the ship, Storm helps to lift it out of the water and the various other members head on board to take out the crew and gather the tech. At one point, Emma Frost unbuttons her shirt in order to dull the minds of some armed goons, then she takes them out telekinetically. Considering how powerful Emma is as a telepath, I don’t think we needed the gratuitous skin, but maybe that’s just me. In the end, they grab the tech, Forge saves his old friend (and they wipe his mind and send him to Arizona), and Emma and the Cuckoos wipe the minds of all the Russians.

Meanwhile, Forge is getting Tempo’s help to build a distillery, considering she can age fresh whiskey immediately. And after another failed attempt for the Five to resurrect Kitty Pryde, Xavier decides to give it a rest.

This issue is a good example of intention vs. execution and how they don’t always line up. There’s a great panel at the start of the issue where one of the Stepford Cuckoos informs the Quiet Council that the the Marauders have “sailed to war”, and it feels cool. It’s like the phrase “prepare for battle” in a big dramatic movie or TV show. The line means business. But then the issue is just about this squad of X-Men capturing a ship full of nameless goons. Duggan has been doing an OK job setting up all the political machinations so far, but this issue, after waiting so long, really emphasizes how meaningless those machinations feel. So, like…the Russians have access to power-suppression technology? And the Hellfire Brats are doing their usual “sit in a boardroom and giggle at being evil” schtick? I dunno. Feels like it should be more momentous. 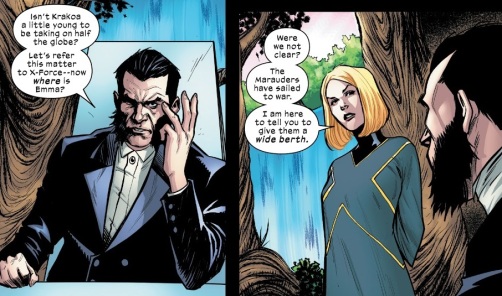 The Marauders get to do whatever they want

Of course, I still rate the issue high, because it’s a fun comic. All of the Marauders get a chance to be badass, even if I’m a little iffy about one of Emma’s big moments. After she defeats the armed goons, Pryo exclaims, “How do you control so many of them at once?” It was four goons. With zero mental protection, and armed only with handguns. This is Emma Frost we’re talking about. She can handle four guys with guns without needing to resort to eye-candy. But Emma gets some other good moments this issue, like revealing that she owned a flying saucer, and using her powers to wipe the minds of the entire crew. I also liked Bishop’s new Red Bishop outfit. And the idea that Tempo is using her powers to help Forge’s distillery is exactly the sort of thing I want to see in Dawn of X.

But a squad of X-Men this powerful going to “war” kind of fizzles out when it just involves getting onto a ship and beating up some goons. Iceman and Storm create a giant iceberg to trap the ship, and that’s it. Call me when Iceman and Storm really go “to war”.

TL;DR: Fun issue with a lot of great character moments, but the overall plot of this individual issue leaves something to be desired.