6 Superhero Vehicles That Are Knock-Offs of the Batmobile

Want to hear a funny story? So I’m trapped at home during this global pandemic, right? But I’m allowed to go out for groceries. So I did yesterday, made it all the way to the store and then my car wouldn’t start! Isn’t that hilarious? And then the shop I was able to take it to said they needed to keep it overnight, and as of my posting this listicle, I have yet to hear what the damage is going to be.

So let’s talk about Batmobiles. 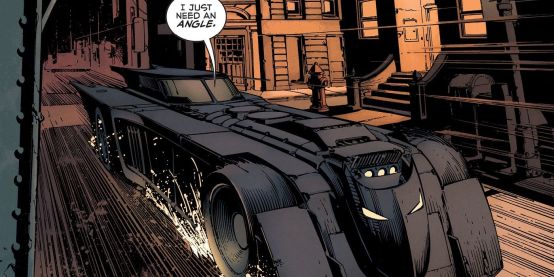 The best of multiple Batmobiles

More specifically, let’s talk about knock-offs of the Batmobile. I love the Batmobile. It’s my favorite of all fictional vehicles. And I could have done a list of my favorite Batmobiles, but there are too many to pick from. I could have done a list of other superhero vehicles, but that seems too generic. So how about a list of vehicles that are clearly just knock-offs of the Batmobile, whether intentionally, as part of an obvious parody or just because they tried to slip one by the readers. That should be fun! Join me after the jump! 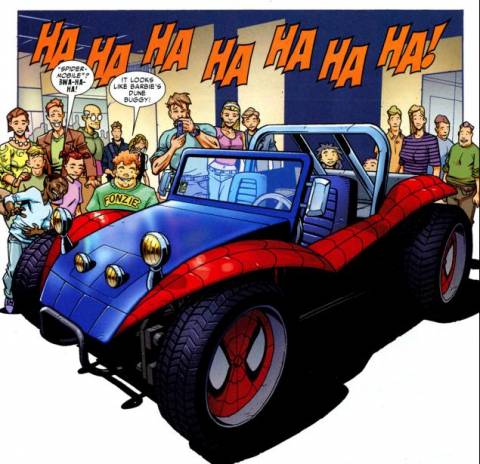 I didn’t want to include the Spider-Mobile on this list. Everybody’s heard of the Spider-Mobile. It’s great! But I’m pretty sure it’s only connection to the Batmobile is the use of the word ‘mobile’. No other vehicles in the world use ‘mobile’ other than the Batmobile, so I think that part is a parody. But the rest is not, at least not in the way I’m putting this list together. But I wracked my brain and the internet and couldn’t find a sixth entry. So I’m surrendering to fate and putting the Spider-Mobile. It’s real. It was in comics. And now it’s just a fun Spidey gag. That’s good enough. 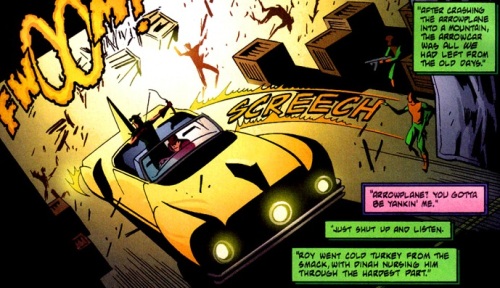 This apparently needed a fin on both the front and back

Why does Green Arrow need a car? For that matter, why did he need an Arrow Cave and a boy sidekick? Because early Green Arrow was just a Robin Hood-flavored knock-off of Batman. Has Batman ever used a bat-themed bow and arrow? I don’t know. Probably. But Green Arrow definitely had all the trappings of a good, solid Batman knock-off, including his own themed car. 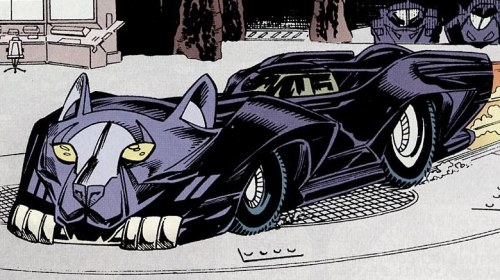 The kitty cat face is the most important part

Catwoman once had her own Catmobile! It’s true! Granted, it was way back in those Golden Age years, and it was just silly. But it was still real, and it’s been referenced here and there throughout the years. Just a silly bit of Catwoman trivia. And as you can see, just like classic Batmobiles with the bat-face on the front, the Catmobile has a cat-face on the front! Good times! And it’s not the only Catmobile in existence!

Who is building all these themed vehicles in the DC Universe?!

Catman also had his own Catmobile! Because why the hell not? Because that’s the glory of the world we live in. That picture is from the Secret Six comic from a few years ago, which I loved. But the Catmobile dates back to even his first appearance! Man, what a crazy world of comics. 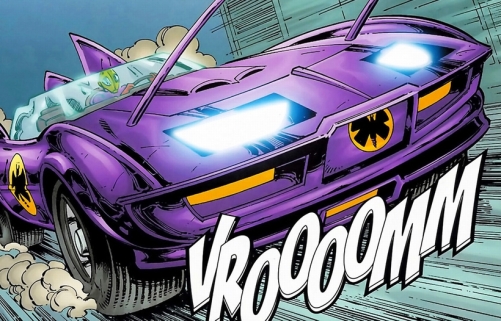 Purple is for pimps and kings

You don’t get more “Batman knock-off” than Mothman, especially as an in-universe character. Mothman is a super-villain who specifically modeled himself after Batman and then sold his services to other bad guys to either protect them from Batman or provide a distraction. He’d use his colorful costume and gadgets to give Batman a run for his money, and that included a moth-themed car. He really thought this through. 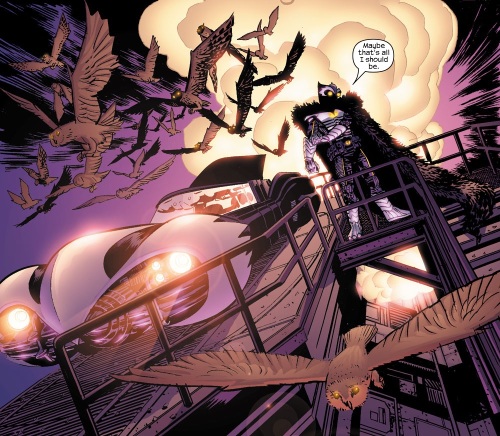 I might be the only person in the world who remembers Ultimate Adventures back at the start of the Ultimate Marvel Universe. I won’t go into full detail — this comic existed as part of an insane three-way bet! — but this was basically a Batman parody living within the early Ultimate Universe. He was Hawk-Owl, and the comic was about him recruiting his kid sidekick, Woody. It was Batman and Robin by way of the gritting, angry world of the Ultimate Universe. The Ultimates even made a big cameo in one issue! And, sure enough, Hawk-Owl had his own mobile. And here it is, in all its glory, finally being acknowledged. I actually enjoyed the comic when it came out. And now you know it existed!

Posted on April 15, 2020, in Comics, DC, Lists of Six!, Marvel and tagged Batmobile. Bookmark the permalink. Leave a comment.