← At Least Somebody on Krakoa is Getting New Uniforms!
How I Would Write the Scream Comic →

Gotta go fast! The Sonic the Hedgehog movie is here and I didn’t like it! I had some cautious optimism going into the film, but that proved to be utterly misplaced. This was a dumb, cliche, by-the-numbers film where a hapless white male becomes best friends with a CGI version of a classic cartoon character. It wasn’t Sonic the Hedgehog so much as it was Hop 2.

But I’m a pretty solid fan of Sonic lore, especially in my youth. I loved the games, I watched most of the cartoons, and I would definitely be open to a sequel that delved more into the lore. And knowing my luck, Sonic the Hedgehog is going to become a huge hit and lead to a bunch of squeakquels. That’s how the world works and I might as well embrace the stupidity of it all.

So join me after the jump for what I would want to see happen in a Sonic the Hedgehog movie sequel! Expect FULL SPOILERS for the movie.

Makes sense, right? The Sonic movie had Tails show up in the post-credits scene, looking to recruit Sonic for something back home. Might as well take the action off Earth and return to Sonic’s home planet, and might as well bring James Marsden with them. If their friendship is so important! They can even bring James Marsden’s truck so that they can continue to have scenes where the two of them are driving around together. Because if you’re going to have some Sonic the Hedgehog media, you definitely want him riding in the passenger seat of a motor vehicle. That’s just classic Sonic.

One thing I did enjoy about the movie was Jim Carey’s performance as Doctor Robotnik. He was fun! And his crazy alien planet castaway look at the end was quality. The important thing is that he’s still alive, and he’s still a genius. The movie worked well, then, as an origin story for the Robotnik from the games. From that humble beginning on the mushroom planet, Robotnik can build an evil empire and start traversing planets! He can threaten the whole galaxy! And there’s your plot for the sequel: It’s Sonic’s fault that Robotnik was sent out into space, so Sonic has to go out into space to stop him.

For some inexplicable reason, I really like Espio the Chameleon. I’m a fan of all of the Sonic sidekick critters in general, but Espio is one of my top faves. But I’ve never played a game as Espio or read many of his comics or seen his episodes of a TV show. I don’t really have any reason to like Espio…he’s just damn cool! So if we’re talking character cameos for the sequel, we gotta have Espio. I can’t explain why, it’s just something I want to happen. 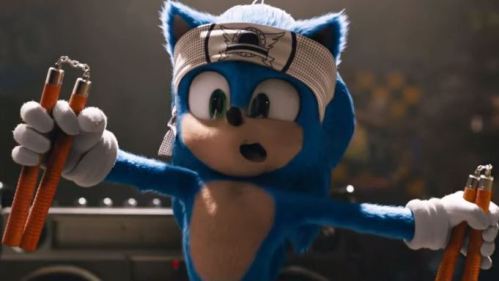 Nunchucks are the height of 90s attitude

This is my most pedantic argument against the film, but I feel this is a safe space for me to rant. This movie isn’t really about Sonic the Hedgehog. If he walks like a duck and talks like a duck, he’s probably a duck, but the blue devil on that screen bares merely a digital resemblance to the video game character we’ve been playing for decades. Sonic the Hedgehog is all about attitude. That was his entire point! He was the anti-Mario mascot. He had sass, he was cocky, he was cool and collected. That’s not the Sonic we get in the movie. In the movie, Sonic is an earnest, lonely dreamer who just wants to puppy dog his way into making a friend. I’d like to see sequel Sonic develop his trademark confidence.

So…Sonic is technically a teenager in the movie. He’s maybe 16, at the most. And yet his best friend is a middle aged man. James Marsden is 46-years-old. Granted, he wasn’t playing 46 in the movie, but still! The movie was about the teenage Sonic becoming best pals with a dude in his 30s, at least. That’s pretty weird. Sonic only had one scene with an actual child, and it was a quality scene. Especially considering this was a kids movie. Do kids really get excited to see their hero hanging out with someone their parents’ age? Maybe Marsden’s niece is the one who goes to Sonic’s home planet the next time around. Or Marsden has some kids of his own who get to go on the adventure. It would just make more sense. 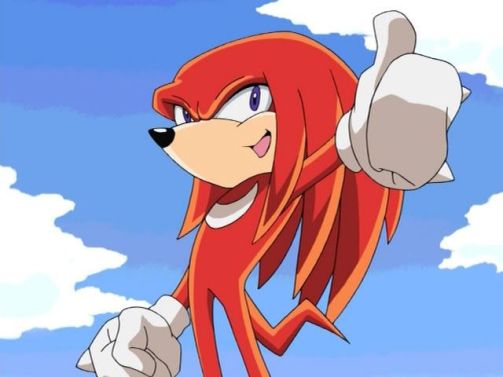 I know I said I wanted Espio to appear, but more than anything, Knuckles is my favorite Sonic character. Heck, Knuckles is one of my all-time favorite video game characters! And since we saw a bunch of evil echidnas at the start of this movie, surely that’s leading towards a full-on Knuckles something or other for the sequel. I was obsessed with Knuckles as a kid for some reason. We weren’t allowed video games ourselves, so I always either had to play at a friend or cousin’s house, or I had to live vicariously through video game magazines. There was just something about Knuckles that struck a chord with me, and I was obsessed with him even before I knew what he looked like. It was weird. I was weird. But Knuckles has always been cool and he needs to show up in the sequel.

I might as well just write the darn thing myself! Somebody get Hollywood on the phone!

Posted on February 19, 2020, in Lists of Six!, Movies, Video Games and tagged Sonic the Hedgehog. Bookmark the permalink. 1 Comment.

← At Least Somebody on Krakoa is Getting New Uniforms!
How I Would Write the Scream Comic →