← It’s a Jurassic World; We’re Just Living In It
Mimic is Alive and a Mutant! →

I’ve started to notice a new Marvel trailer playing during my recent trips to the movie theater: The Fresh-Men. It’s not for a new addition to the Marvel Cinematic Universe, though it liberally borrows some ideas. Oh no, this is different, in all the most hilarious ways. The Fresh-Men is Marvel’s latest group of corporate partnership superheroes.

Mavel and AXE Body Spray got together to design some advertising superheroes. This happens more often than you would expect, and sure enough, I’ve found enough examples to put together an entire List of Six! Original, fully-designed superheroes created for a corporate partnership between a comic book company and whatever random corporation or business group is sponsoring the ads. This silliness typically leads to a one-shot comic starring the new character, often created by some top name comic talent. It’s crazy and it’s funny.

There are few things I find more equally hilarious and disingenuous as corporate advertising. So join me after the jump for six pretty pathetic times when this type of advertising attempted to leech off the hipness of comic book superheroes! 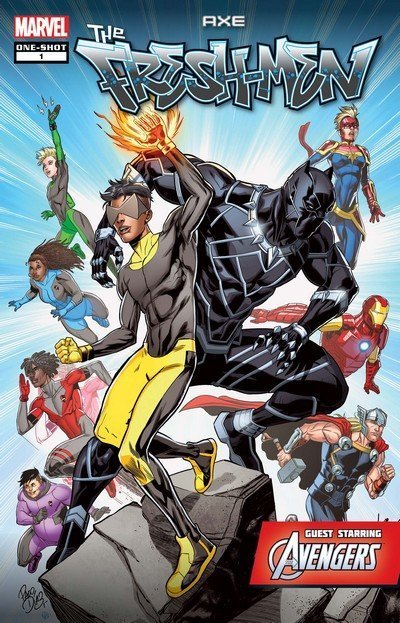 Let’s start with the team that has inspired this list: The Fresh-Men from Marvel and AXE Body Spray! Their name is a pun, as these five diverse students are both freshmen at school and likely stay fresh, thanks to the chemical warfare of AXE Body Spray! Unfortunately, they did not get their powers from falling into a vat of AXE. Instead, Damien Garcia (Burner), Lyssa Jordan (Windchill), Danny Li (Kid Vanish), Emily Everheart (Override), and Tarell Taylor (Double Time) are students at the Future Minds School of Science and Technology in Chicago, which just so happens to be connected to Wakanda! Using Wakandan technology, these hip teens develop super powers and take on the villain Klaw! You know Klaw, from that popular movie. And the Fresh-Men will soon team up with the likes of Captain America, Thor and Captain Marvel! How exciting for them in their fledgling fight against…body odor? Is AXE a deodorant or a perfume?

Anyway, here’s the announcement trailer for your viewing pleasure, and you can check out the online web comic at AXE’s website! I’m sure you can’t wait to read every episode and be up to date on this hip new awesome comic superhero team! 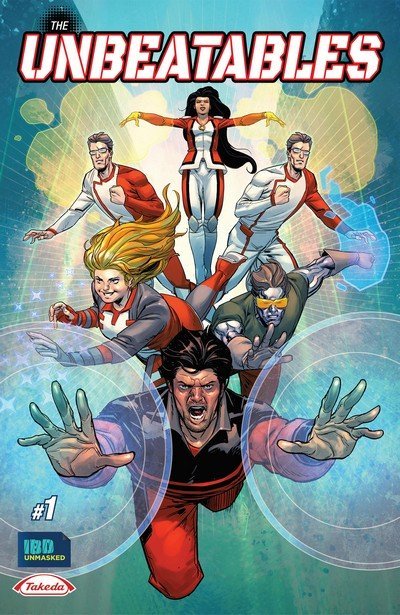 The Fresh-Men are part of a proud Marvel tradition of throwing together a team of five diverse young people to satisfy a corporate partnership. Behold The Unbeatables, five heroes bound by inflammatory bowel disease! Don’t get me wrong, I’m sure IBD is a big problem for some people, but is a team of comic book superheroes really the best way to address the issue? Japanese company Takeda Pharmaceuticals Company Limited thought so back in 2016, bringing us The Unbeatables! Switchback, Rubblerouser, Luminaria, Samarium, and Datawave are the Unbeatables, though only some of them have IBD. They’ve got a wide range of super-powers, from earthquake-control to internet-control to the ability to create duplicates of yourself by drawing them from elsewhere along your timeline. Interesting mix of random powers, all of which surely help teach others about inflammatory bowel disease!

The Unbeatables comic is still available online, from names like Fabian Nicieza, Buddy Scalera, and GL Giles. The press release was also quick to point out that the cover artist, Kirbi Fagan, was also a sufferer of IBD.

Most of the entries on this list are from Marvel Comics, but DC did not escape the lure of corporate partnership comics! Behold the Technician, created through a partnership with Craftsman tools in order to advertise the Craftsman Bolt-On System! The Technician is the guy who keeps the Hall of Justice up and running, the guy working under the hood on the likes of the Batmobile and Wonder Woman’s invisible jet. But he’s not just a hanger-on! When the villainous Key threatens the League, the Technician and his Craftsman Bolt-On System step up and save the day! I bet Batman has already added one of those to his iconic utility belt, right Technician? 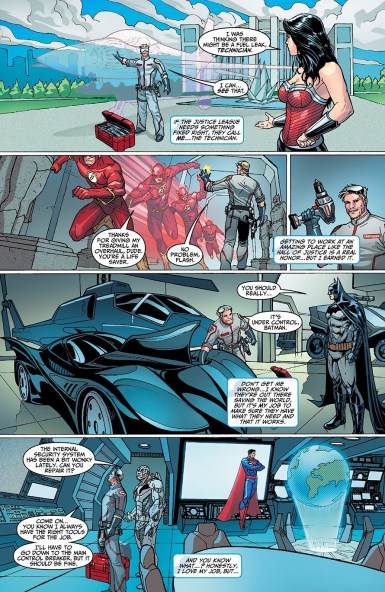 The one-shot comic was written by Joshua Williamson, with art by Christian Duce. I would link you to the comic, but every time I click the links I find I get a warning from the web browser of a potentially dangerous site. I doubt the Craftsman Bolt-On System can fix that.

Comic books and daytime soap operas have a lot of crossover audience, right? Apparently that’s what Marvel and the TV show Guiding Light thought way back in 2009 when they did both a crossover comic and a crossover episode of the TV show! Harley Cooper was a longtime character on the show who got electricity powers from a freak movie theater accident for a single episode. She then donned a pretty lame costume and fought some bad guys in the town of Springfield, where the show was set. In the end, she decided to give up her powers so that she could continue living a normal soap opera life. But that didn’t stop her from showing up in a comic to help Spider-Man and the Avengers fight the Sinister Six! Because obviously the likes of Spidey, Wolverine, Iron Man and whoever else are going to go on a road trip to Springfield to meet a random new superhero!

Jim McCann wrote Guiding Light’s short comic book appearance, a back-up feature that ran in a couple issues back at the tail end of 2009. And here’s a trailer for the soap opera episode in question, in case you needed more proof.

I think Captain Citrus is my favorite on this list, not least because of his bright orange costume. Just look at that guy! He’s trying so hard! Captain Citrus was a joint venture between Marvel and the Florida Department of Citrus to try and get kids to eat more oranges. I love oranges, so I am 100% behind Captain Citrus. In the story, John Polk lives on an orange grove and gets his powers from some strange solar pods, which give him the ability to create energy shields and other energy weapons out of pure Florida sunlight…which is apparently different from other sunlight! I don’t even think he’s a legitimate captain. But that didn’t stop him from teaming up with the Avengers to fight the forces of evil. Even funnier, Captain Citrus started out as a pretty regular mascot: a big, round orange dude in a cape. But the Florida citrus growers wanted someone buffer and cooler, so they reached out to Marvel! 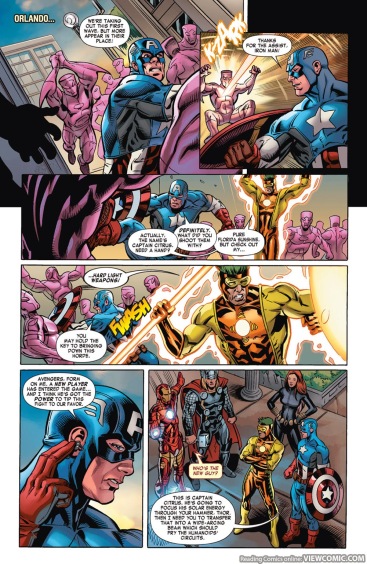 The Captain Citrus web page is still active, but the links to his comic book issues don’t work anymore. For shame. Creators Ralph Macchio and Kevin Sharpe worked on the comic.

The engineering team at Northrup Grumman Elite Nexus (N.G.E.N.) was supposed to be a hip new partnership between Marvel and Northrup Grumman at New York City Comic-Con in 2017, but those plans went the way of the dodo rather quickly. Why, you ask? Because Northrup Grumman is a weapons manufacturer! Someone, somewhere thought it would be a good idea in today’s day and age to do one of these cheesy corporate partnership comics with a weapons manufacturer! Had they not seen the first Iron Man film?! Still, when word got out about this partnership, the fandom was irate at the dunderheaded promotion of the military industrial complex, and the whole thing was scrapped. Which is a shame, because surely we all would have fallen in love with the diverse band of N.G.E.N. employees using their technical skills and special equipment to help the Avengers!

Fabian Niceiza is back as the writer, with art by Sean Chen and Walden Wood. I don’t have a link to the actual comic, but io9 has some pages and a synopsis, which is good enough for me!

← It’s a Jurassic World; We’re Just Living In It
Mimic is Alive and a Mutant! →