← Sony Pulls the Plug On Their Spider-Man Deal With Marvel
A Longer, Dumber Look At That Avengers Video Game →

6 Spooky Marvel Characters for the “Adventure Into Fear” Shows

We’ve known for some time that Ghost Rider and Daimon Hellstrom would be getting Marvel TV shows. But last week, Marvel TV announced that they were only the start of an “Adventure Into Fear” brand of spooky Marvel shows. They want to tap into the “terror” of superheroes on Hulu. Sounds good to me!

Ready for his closeup!

Ghost Rider was great on Agents of S.H.I.E.L.D., though this is apparently going to be a new incarnation (while keeping the same actor). And Daimon Hellstrom is always cool as the Son of Satan. But who else will get shows? Blade and Morbius are getting movies. Man-Thing…had a movie. Does Marvel have a deep horror bench beyond this crew? Of course they do! Allow this comic book geek to list off a couple solid choices for fear and terror-themed television shows!

Join me after the jump for my suggestions! And feel free to share your own in the comments! What spooky Marvel characters do you want to see on the small screen?

Remember him? Ryan Reynolds played him in Blade 3, before Ryan Reynolds’ career really took off. So yeah, Ryan Reynolds has played at least three comic book characters on the big screen. But the character himself is pretty cool and could fit into this terror TV show world, especially since the shows won’t have access to Blade. Hannibal King could be their vampire hunter! Hannibal King was a private detective who got bitten and turned into a vampire, but because he immediately refused to become a monster, he never feasted on human or living blood. He instead drinks from dead animals or steals from blood banks. And eventually went on to get some rough “cures” that put him somewhere between vampire and human. So he’d be a half-vampire private eye who goes around killing other vampires. Sounds good to me!

If you haven’t already, go back and read Nextwave!

Elsa Bloodstone is the hipper, cooler, wittier child of famed monster hunter Ulysses Bloodstone. She’s a badass monster-killing warrior woman with a chip on her shoulder and no time for anyone’s crap. She was awesome in Nextwave and she’s stuck around on the fringes of Marvel Comics, popping up whenever anybody needs a monster put down. She’s the perfect choice for a TV show, an older and more confident Buffy the Vampire Slayer who kills all manner of monsters, not just vampires. It’s not an original idea, I know, but I’m sure Marvel can work their magic!

I have always thought that Jack Russell, the Werewolf by Night, is a silly character. I’m pretty sure he’s just a regular werewolf. And that name is ridiculous. He’s been around since the early 1970s though, so he’s got some street cred. And he’s officially a Marvel character, so they could do worse. I dunno. Marvel has a whole team of monster characters that are just classic monsters, like Dracula, Frankenstein’s Monster, Zombie, Mummy and this dude. I went with him because the others have been done to death. I mean, so have werewolves…is it too late to change this entry? Let’s just move on.

Halloween is right around the corner!

This might be a bit of a stretch for a TV show because Jack O’Lantern is a pretty minor villain. He’s essentially a knock-off Green Goblin. But just look at the guy! He’s a villain with a flaming Jack O’Lantern for a head! Who flies around chucking pumpkin bombs at people! Marvel doesn’t have access to the Green Goblin for this type of show, so let’s use Jack! Make it a show about a villain with a spooky element, about a small-time crook who gets in way over his head with the occult. Or maybe he’s a badass military guy with awesome hardware who gets in way over his head with the occult! And then his flaming pumpkin head can go up against Ghost Rider’s flaming skull head!

I hope J. August Richards is still getting work

This is an easy one. Deathlok appeared in some early seasons of Agents of S.H.I.E.L.D., but he was really underutilized, so how about bringing him back? The Ghost Rider show is drawing inspiration from when the character appeared on Agents, so why not do the same with Deathlok? He’s a reanimated corpse turned into a cyborg mercenary! That’s pretty damn cool, and pretty damn spooky! 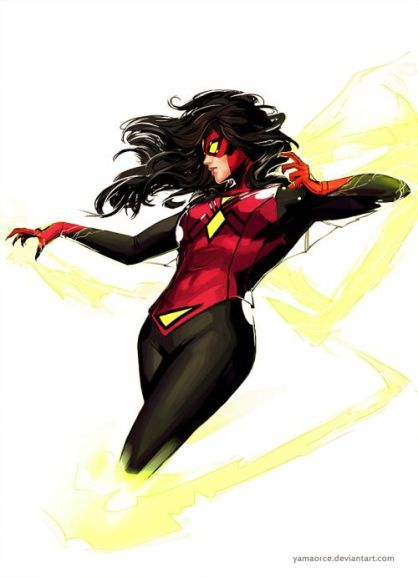 I’m still a big fan of her new costume

Spider-Woman is probably never going to get a movie. Her name is too similar to Spider-Man, who has already saturated the cinema. So what better way to actually use Spider-Woman than to give her a minor TV show? Jessica Drew is a very different character than Peter Parker, operating in a very different world. She’s worthy of a show, and it could be a spooky show at that. She could be a spy or a private eye and they could play up the creepy factor of spiders. I really think it could work!

← Sony Pulls the Plug On Their Spider-Man Deal With Marvel
A Longer, Dumber Look At That Avengers Video Game →