← Why is the Mission Impossible Film Franchise So Completely Meaningless?
Those Maniacs! They Blew it Up! My Disney Animated Dream is Dead! →

Deadpool is a pretty darn popular character these days, what with a big movie sequel coming out at the end of the week. Me, being a finger-on-the-pulse kind of guy, I’ve decided to tie-in this week’s List of Six with the release of Deadpool 2! How about that?!

The problem is that I don’t actually read a lot of Deadpool comics. Or any Deadpool comics, honestly. I like the character just fine, but I don’t have a handful of favorite Deadpool moments or zingers out of which to make a list. Instead, I’ve decided to do a list of the best alternate Deadpools! There have been a bunch of alternate reality, alternate future, and replacement Deadpools throughout the years and it’s time they were bundled into one place! Or, at least, bundled into one place by me.

Join me after the jump for the best and wackiest alternate versions and parodies of Deadpool! And you should probably go see his movie this weekend, too. I know I’m going to! Get it? Because of Deadpool 2? Yeah, you get it.

Nothing is as it seems

Contrary to popular belief, Gwenpool doesn’t actually have anything to do with Deadpool, otherwise she’d be a perfect addition to this list. Gwenpool doesn’t have anything to do with Gwen Stacy either, despite being created on the heels of the popular Spider-Gwen character. Nope, Gwenpool simply has the coincidental name of Gwendolyn Poole. I wanted to take the time to clear that up for everybody. Gwen comes from an alternate reality where the Marvel Universe is just comic books. When she arrives in the MU, she decides that the best way to survive is to be a superhero, because they’ve got plot armor and she knows how to take advantage of all the tropes. When she goes to get a costume made, the costume designer misreads her name as ‘Gwenpool’ and decides to model the outfit after Deadpool. That is their only connection. Weird, right?

I’m in the middle of reading Gwenpool’s comic series and it’s good so far! Full of fun, whimsical humor, with just a touch of sadness bubbling underneath. 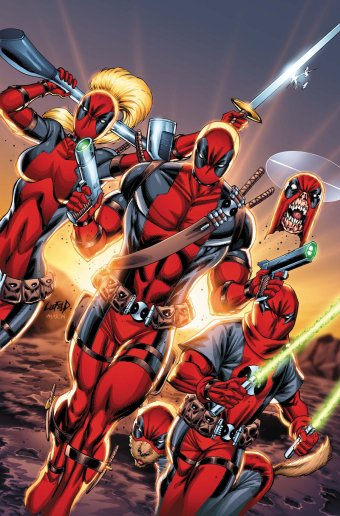 The plot for Deadpool 3

The Deadpool Corps practically does my job for me. I could have done a list of just the members of this dumb little team and called it a day. But nah, let’s have a bit more fun with this and lump them into one. The Deadpool Corps was put together by regular Deadpool when he was tasked with saving the Multiverse. So he reached out and found a bunch of alternate versions of himself to get the job done. There’s Lady Deadpool, Dogpool, the zombie head Headpool, and Kidpool, whose creator will hopefully always live in shame for not using the name ‘Kiddie Pool’. Then when the Deadpool Corps came back to battle an Evil Deadpool Corps, they were joined by the likes of Pandapool and a bunch of other people who pal in comparison to Pandapool, so I won’t mention them by name.

5. All the merged superhero versions

Just a taste. I’m too lazy to make a proper collage.

Due to Deadpool’s popularity, all manner of wacky stories have been written about him. The Deadpool Corps has a bunch of great alternate versions of him, but Marvel writers and artists then went a bit deeper and just started doing the Fusion Dance between Deadpool and pretty much every other Marvel character. There’s Venompool, Deadpool the Duck, Galactipool, Wolverinepool, Grootpool, Deathlokpool, and D.E.A.D.P.O.O.L., who is the Deadpool crossed with M.O.D.O.K., obviously. There’s even a Doctor Doom version of Deadpool called Death Mask. There’s just been a whole bunch of them and they’re all pretty neat. 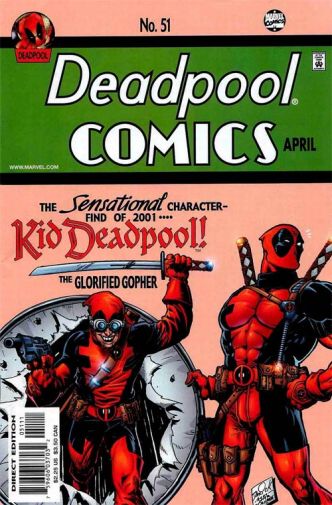 Deadpool has had a ton of sidekicks over the years, but the most sidekicky-named of them all was Kid Deadpool. Christopher Cassera wrongly believed Deadpool killed his father, when it was really villain Maxy Millions. To help the kid overcome the trauma, Deadpool gave him an old costume and a bunch of old gear and let him tag along on Deadpool’s own job to kill Maxy. Chris still didn’t like Deadpool, however, and later blew up his home. So Deadpool sicced the Juggernaut on the kid and he hasn’t been seen since!

He’s a dude parodying a dude knocked off of another dude!

Everybody who’s anybody knows that Deadpool himself is a parody knock-off of the DC Comics character Deathstroke the Terminator. It’s pretty obvious. As comic book fans, we kind of just accept it. And some comic book writers have had some fun with it. In an issue of the Superman/Batman comic, the duo came up against not only Deathstroke, but an alternate reality version of Deathstroke who just happens to have a lot in common with Deadpool (it helps that writer Joe Kelly wrote both this issue and the Deadpool series). He’s Deadpool in Deathstroke colors and that’s a pretty solid reverse parody if you ask me.

Is Deadpool a good guy? Maybe he’s a bad guy. Either way, Evil Deadpool is straight up evil! This Frankenstein’s monster of an alternate Deadpool was created when Deadpool’s stalker, Ella Whitby, went around collecting all the body parts that fell off Deadpool during his battles. Lose an arm? Just grow another one, and Ella will grab the lost one and throw it in her fridge. Super gross. Anyway, Deadpool found out about it, grabbed all the body parts and thew them in a dumpster…at which point the healing factor kicked in and turned all those mismatched body parts into a new person! Evil Deadpool was super evil and he set about causing all manner of trouble for real Deadpool. He’s also behind the Evil Deadpool Corps I mentioned earlier. Because why not?

Red Tool is a personal favorite parody of mine! We go back to DC Comics for this one, continuing the long-standing tradition of just parodying each other’s superheroes. Writers Amanda Conner and Jimmy Palmiotti were given the chance to re-vitalize Harley Quinn for a new comic, and at some point, they had a pretty neat idea: what if Harley teamed up with Deadpool? They’re both wacky, fourth-wall-breaking comedy killers, what’s not to love? But since a real crossover wasn’t in the cards, they just created Red Tool. His real name is Wayne Wilkins. He is a master mercenary. He speaks in weird speech bubbles. And he dresses like Deadpool. Of course, he’s also an old guy and from the future, with an unhealthy obsession for Harley, but we can’t all be perfect.

Posted on May 16, 2018, in Comics, DC, Lists of Six!, Marvel and tagged Deadpool. Bookmark the permalink. Leave a comment.

← Why is the Mission Impossible Film Franchise So Completely Meaningless?
Those Maniacs! They Blew it Up! My Disney Animated Dream is Dead! →