The 6 Weirdest Versions of the Thing

The Fantastic Four are coming back to comics, like we all knew they would eventually. I still can’t believe how many people complained about not having a regular Fantastic Four comic. It was clearly temporary. And honestly, for me personally, the scenes we got between the Thing, Human Torch and Doctor Doom lamenting the loss of the Four in the pages of Infamous Iron Man were absolutely worth not having a regular comic. 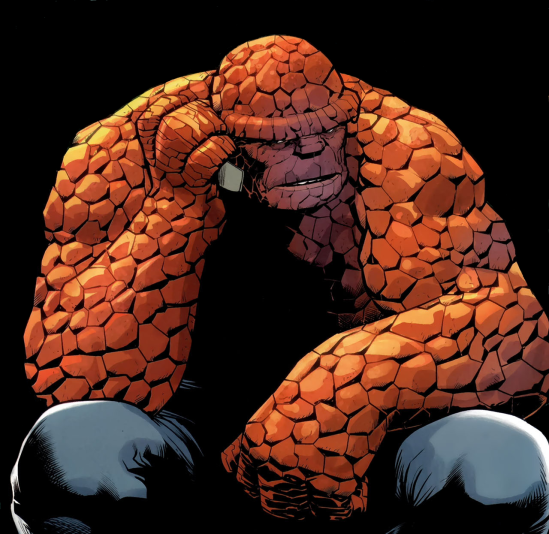 Hold on, he’s got to take this

To celebrate the return of the Fantastic Four — by writer Dan Slott and artist Sara Pichelli — I’m pulling out a List of Six draft I’ve had gathering dust on my blog dashboard for years! The Thing is one of the all-time great comic book characters. From his name to his attitude to his pathos to his battle cry to his sheer boisterous spirit, the Thing is pretty fantastic! And because he’s so fantastic, there have been some pretty weird versions of the Thing over the years!

Join me after the jump for some really crazy alternate versions of the ever-lovin’ blue-eyed Thing!

The Allreds are great artists!

Pop star Darla Deering is one of my favorite alternate members of the Fantastic Four. The story goes that the main team wanted to do a bit of time traveling and planned to return four minutes after leaving — but in case something went wrong, each member picked a temporary replacement to fill-in. The replacement Fantastic Four consisted of proven superheroes Ant-Man, She-Hulk and Medusa. Then Johnny Storm realized at the last minute that he had forgotten to pick a replacement, so he asked the pop socialite he was dating at the time, Darla! She was game and went to hang out, and when the Fantastic Four, predictably, had problems coming back on time, Darla was pressed into actual superhero service! She was given one of Ben Grimm’s old Thing Suits, which he wore when he’d lost his powers but still wanted to contribute. So for a short time, one member of the Fantastic Four was a pop singer struggling to wear a giant Thing suit! She was great with the kids, though!

Not even Magneto likes him!

The grotesque It hails from the House of M universe, which was all about mutants, so the Fantastic Four got kind of a short shrift. Reed Richards did indeed launch a rocket into space, but he, Sue Storm and John Jameson all died. Ben Grimm became the It, a super-strong rock creature with diminished intelligence. He was scooped up by Doctor Doom, who started his own Fearsome Four with Doom at the head! Doom treated the It like a worthless pet, which eventually drove Grimm mad! He killed Valeria and Kristoff, the other team members, and goes after Doom, too! 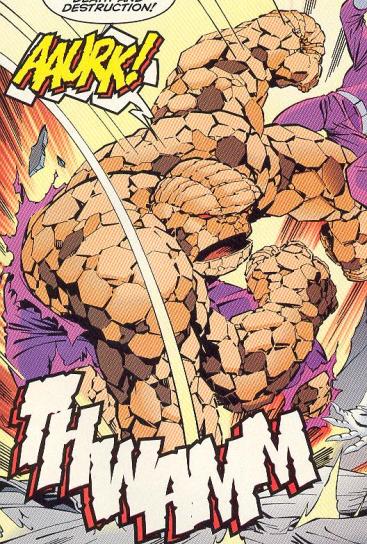 Senator Ben Grimm is from Amalgam Comics, that wonderful joint project from the 90s where DC and Marvel combined their characters into one mish-mashed universe! I love Amalgam Comics and you should, too! In the Amalgam Universe, the Fantastic Four was mashed up with the Challengers of the Unknown. The good Senator was a civilian passenger in Reed “Prof” Richards’ experimental space flight, along with Johnny and Sue. All four survived and were unchanged, and decided to dedicate their lives to tackling the fantastic corners of the world! But when they go up against the evil Galactiac, Ben is transformed into the monstrous Four-Armed Thing! Ben attacks his friends, but the day is saved and he’s reverted back to normal — though the senator asks Reed if he can find a way to change him back into the Four-Armed Thing! What a twist! 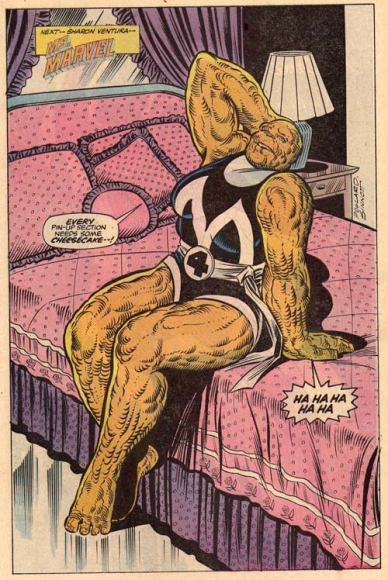 There’s a She-Hulk, right? So why not a She-Thing? And how about we get really weird with it? Sharon Ventura teamed up with the Thing in the Unlimited Class Wrestling Federation and was given powers by the Power Broker and Dr. Karl Malus (the villain from the second season of Jessica Jones, who I’m just now learning is an actual villain from the comics! Neat!). Sharon was given enhanced strength and the sorts of powers that would be good for pro wrestling, and she went by the name ‘Ms. Marvel’. That’s a pretty solid super-powers origin, but you may be wondering, how did she become the She-Thing? Simple! She joined the Fantastic Four and got exposed to cosmic rays, like you do! That turned her into a lady version of the Thing and she slowly faded into comic book obscurity. I think she was cured at one point.

Manga was all the rage back at the start of the century, and Marvel capitalized on that with their Marvel Mangaverse stories. The Fantastic Four were turned into a super-powered emergency response team, with Reed Richards handling logistics, while Sioux, Jonatha and Benjamin (pronounced Ben-ya-meen) used their powers to fight the bad guys. Ben was a nervous, introverted fella, until he used his powers to form a giant, jaeger-sized shell of rocks and debris around himself, at which point he became the foul-mouthed butt-kicker you see in the picture above.

When I was first putting this list together and remembered the Megascale Metatalent Response Team from back in the day, I mistakenly thought the Thing was a giant mech that was piloted by the Four. And now that I’ve written it down, that’s totally my idea! Somebody get me Marvel on the phone!

1. Thing Rings, do your thing!

This exists. Watch the video, if you can. Way back in 1979, when television was clearly a more desolate place, there came to be a show called Fred and Barney Meet the Thing. Yep, Fred Flintstone and Barney Rubble. But they didn’t actually meet the Thing. It was just a collection of old Flintstones cartoons alongside new cartoons about scrawny, red-headed teenager Benjy Grimm. Benjy had a pair of magic things, and when he put them together and said the magic words — “Thing Rings, do your thing!” — he transformed into the ever-lovin’, blue-eyed Thing! Like, straight out of the comics, and yet completely different. Benjy would then go on your typical 1970s teenage cartoon adventures, protecting his friends from bullies, solving mysteries and thwarting mad scientists. Animation has never been very kind to the Fantastic Four.

Posted on April 4, 2018, in Comics, Lists of Six!, Marvel and tagged Fantastic Four, The Thing. Bookmark the permalink. Leave a comment.