Once upon a time, I noticed an odd trend in the pages of Inhumans vs. X-Men, wherein the superhero Strong Guy seemed randomly added to background scenes. As a fourth-tier, supporting X-Men character, Strong Guy has never really mattered much in the larger X-Men scheme of things. He was barely ever acknowledged outside of his home book of X-Factor.

But ever since Death of X, Strong Guy has been popping up as a member of the larger X-Men cast. And I found this rather weird. Out of all mutant characters, why was Strong Guy all of a sudden getting background supporting character slots? He was never a member of the X-Men before this, but now he’s clearly involved? Even if only in the background?

At first, my theory was that some editor passed a decree to start adding Strong Guy to X-Men scenes. I don’t know why or how, it just seemed like it had to have been a legitimate plan. There’s no way it was random coincidence. I started the Strong Guy Watch to keep track. But I backed off once it became clear that Strong Guy was definitely a member of the larger X-Men cast, as shown from his recent appearances in Phoenix Resurrection. The dude clearly belonged.

But a new Strong Guy appearance this week has reopened my original theory! What the heck is going on with Strong Guy that he would appear in Unbeatable Squirrel Girl?! 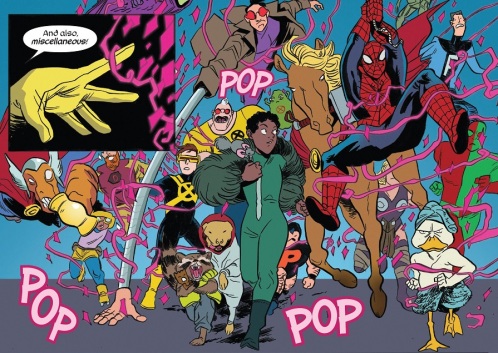 In the panel in question, Strong Guy is among a wide variety of colorful characters summoned by Loki to help Squirrel Girl fight the Silver Surfer (it’s complicated, I know, but read the issue, because it’s great). The collected characters are immediately dispatched and sent back where they came from. So it was, at most, a two-page gag where artist Erica Henderson got to draw a bunch of wacky Marvel characters. They included Sleepwalker, for crying out loud!

But why use Strong Guy?

Out of all the characters that could have been chosen, why Strong Guy? Yes, he looks weird, and would therefore be perfect for the comic and Henderson’s art style. But she could have picked anybody. Was it even her choice? Did writer Ryan North tell her to include Strong Guy?

Or does my original theory hold: Was there some sort of editorial decision recently that Strong Guy would be used a lot more in the background of comics?!

It’s a mystery I will stay with all night, if I have to! But I will also take no steps to legitimately solve it. Just letting it simmer in my brain is good enough for me!