I should have written this a couple weeks ago, but I kept putting it off because I am terrible with procrastination. Chris Hemsworth has been talking about convincing Hugh Jackman to return as Wolverine for a n X-Men/Avengers movie crossover, and Comcast is reportedly considering a re-bid for the Fox properties, so I reminded myself to write out my thoughts on the matter.

It’s simple: I do not want the existing X-Men movie franchise to crossover with the existing Marvel Cinematic Universe. 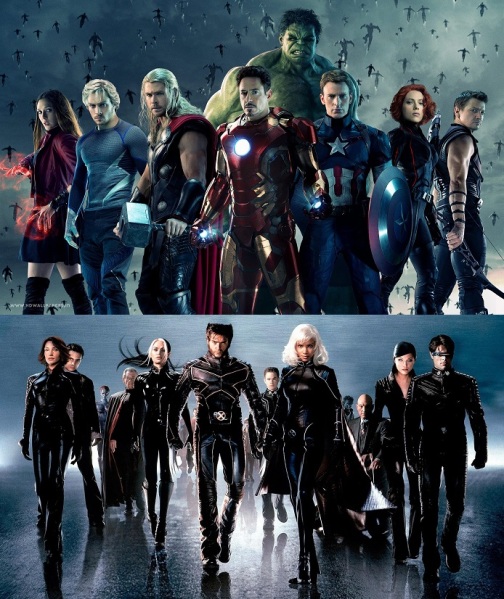 Many moons ago, Disney purchased all the Fox Studios properties and the X-Men and Fantastic Four licenses have been returned to Marvel Studios. That’s probably a gross simplification of the situation, but it’s what I’m rolling with for now.

I think Marvel and Disney should wait a couple years and then start over from scratch with both the X-Men and the Fantastic Four — exactly what they did with the likes of Daredevil, Ghost Rider and Spider-Man.

Even though the X-Men movies have been hugely popular and ongoing since the start of the century, and even though there are still more X-Men spin-off movies to come, I think Marvel should just let them end and start over.

For one thing, the continuity of the X-Men films is insane and would never fit with the continuity of the Avengers films. The X-Men movies have used time travel and alternate futures and vague connections to just make the movies they want. They’re currently engaged in some kind of decade-hopping reimagining, where the characters never age despite each movie taking place in a different decade. But yet it’s also supposed to connect into the original trilogy?

It’s not like there’s a singular X-Men roster that we would want to see fighting the Avengers anyway. Each new X-Men movie has a new team lineup, with only really Wolverine as the consistent factor. So who exactly do we want the Avengers fighting? The original X-Men movie lineup? Half of those actors have moved on. The current Apocalypse/Phoenix lineup? Why? They’ve barely been in one film, and that film barely included Wolverine.

Whatever version of the X-Men the writers, creators, producers and geniuses of the Marvel Cinematic Universe come up with, it’s going to be great. They took the thoroughly trodden Spider-Man character and created a brand new version that not only fit perfectly into the MCU, but was really fun and new. We all loved Spider-Man: Homecoming.

And we’re all going to love whatever the MCU comes up with for the X-Men.

Off the top of my head, just say that there are very few mutants out there, that they’re a new phenomenon, and that Professor Charles Xavier has been keeping them a secret as best he can from the safety of his secret school in Westchester. Just do the X-Men straight as they were originally introduced, as a mysterious new arrival in the world of super-powers, one whose secrecy and weirdness makes people react differently to them than the public, easily identifiable Avengers.