← I Need to Stop Getting My Hopes Up With X-Men Rosters
Deadpool 2 is Gonna Bring the Funny! →

The big comic book news of the month is that writer Brian Michael Bendis has finally made the jump from Marvel to DC! This is pretty huge news! Bendis is one of the most popular and noted comic book writers of the modern era, having had a big hand in shaping the Marvel Universe for the past decade and beyond. This is the guy who created Jessica Jones, turned the Avengers into a popular comic book franchise and recreated the wheel with Ultimate Spider-Man.

It has always made sense for Bendis to eventually try out DC Comics for awhile. Lots of writers jump back and forth between the Big Two. Heck, Bendis was notable for having not done that. So it feels inevitable that some deal would be reached and his creative energy would be employed by the direct competition.

I, for one, am rather excited to see what Bendis writes at DC. I know I’ll be picking up his new comics, whatever they might be. And I just happened to have a couple suggestions. 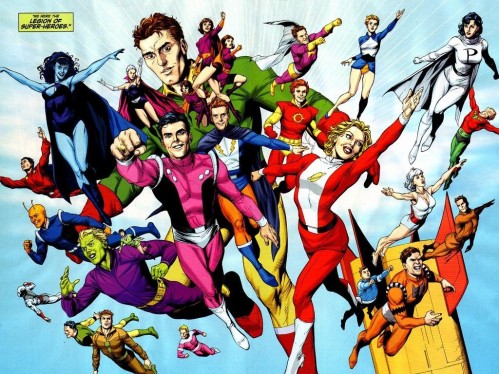 Remember when they had a cartoon show?

One of my favorite comics of the past year was Bendis’ Infamous Iron Man, wherein he turned Doctor Doom into a good guy in an Iron Man costume. I’m pretty sure that in DC Rebirth, infamous villain Lex Luthor is parading around as a superhero in a Super-Iron Man costume. I don’t think heroic Lex Luthor has had his own comic series yet, so here’s the best opportunity! Let Bendis take over the character and do a big, celebrated Lex Luthor run. He can write all the Tony Stark/Doctor Doom stories he’d been planning on writing but will now have to give up.

He almost had a movie, once upon a time

DC is making a big push for Plastic Man going forward. They’ve finally brought him into the post-New 52 world with the Metal storyline, and he’s going to be a member of a new super team starting next year. So why not give Plastic Man his own solo ongoing comic? And Bendis is known for humor, so why not give it to him? I would prefer a more Bendis-humor centric comic than some wild and wacky Plastic Man comic…or maybe I wouldn’t! DC should give Plastic Man to Ryan North if Marvel is ever foolish enough to let him go. That would be a great comic! But I’m sure Bendis would do a fine job as well!

Two birds with one stone!

Duke Thomas as The Signal is a dumb idea. I’m still miffed that DC is going with it in the long run. It’s way past time that Duke Thomas became the newest Robin for real, and Bendis would be the perfect writer to usher in that storyline! Bendis was amazing on Ultimate Spider-Man for all those years, and then he went and did it again by creating Miles Morales! So if you want comics about a teenage superhero in today’s modern world — like Duke Thomas as Robin — then Brian Michael Bendis is a great choice! Hopefully he could do better with Duke than he did with Riri Williams.

There’s no stopping it now

You know this comic is coming, so why not just give it to Bendis? DC is keeping their Watchmen plans close to the vest lately, but the Doomsday Clock storyline is arriving this month, bringing the Watchmen characters into the DC Universe proper. I think this is a dumb idea, but who am I to argue? If DC is so determined to gut the lasting legacy of these characters by just tossing them into the DCU, then why not let their new, high profile incoming writer take the wheel? Bendis turned the Avengers into a popular, high profile comic franchise by shaking them to their core and reintroducing them as the New Avengers, so why not having lightning strike twice with the New Watchmen? Who wouldn’t want a book starring Batman, Rorschach, Dr. Manhattan, Silk Spectre and Harley Quinn?!

If you’re going to go to all the trouble of luring Brian Michael Bendis away from Marvel, why would you not put him in charge of your biggest book to tell the biggest story possible? It’s like when DC gave Justice League to Grant Morrison, or when Marvel gave the X-Men to Grant Morrison; and both of those stories are heralded as some of the best, most memorable of all time. The Justice League has largely been a minor title since the launch of the New 52. It tried to be big and important, but I never got the sense that that was truly the case. Even recent pushes, like Justice League of America, haven’t been all that great. So make a clean slate and let Bendis take over however he sees fit. The man turned the Avengers into the comic book powerhouses they are today. Let’s see what he can do with the Justice League!

← I Need to Stop Getting My Hopes Up With X-Men Rosters
Deadpool 2 is Gonna Bring the Funny! →