← My Thoughts on the New Doctor!
The 6 Characters On My Defenders Team →

One of My Own Personal Comic Book Wishes Just Happened

One of my favorite tropes in all of fiction is Evil Versus Oblivion, wherein a super-villain is a reasonable enough person that they willingly side with the heroes when there’s a bigger, more dangerous threat. Doctor Doom, Magneto and the Kingpin do it a lot, offering aid and resources to heroes when someone like Onslaught comes along and threatens to destroy all existence.

This past week, in the pages of Uncanny Avengers, writer Jim Zub and artist Kim Jacinto (with some assists) brought this trope to life with one of my favorite super-villains, a villain I like especially because he’s a reasonable guy. 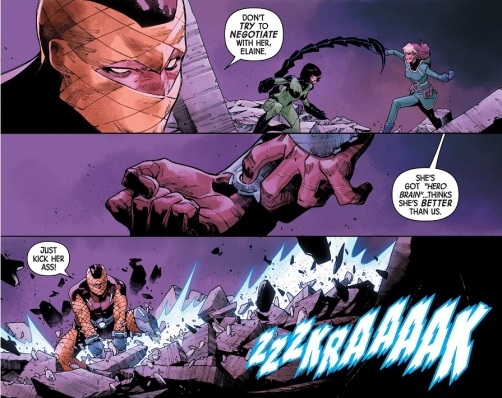 I love the Shocker because he’s a working class, ordinary sort of crook who just wants to make some money. He doesn’t have an intense, personal hatred of Spider-Man, he’s not consumed with the desire for revenge against the wall-crawler,  and he’s not just crazy and evil. He’s just a guy with some special tools that he uses to try to steal money.

And he was trying to loot the Gold Reserve with another favorite villain of mine, Scorpia, when they’re discovered by Rogue. They’re all in Manhattan during Secret Empire, wherein the evil Captain America has created a Darkforce Dimension bubble around the whole island. Monsters of all shapes and sizes are descending on the island and interrupt the villains’ looting.

Then it’s up to Rogue to convince Shocker and Scorpia to join her in fighting for their lives and stopping the monsters!

I bet’cha Zub was sitting on that one for awhile

This is literally plucked from my dream journal of comic book happenings. The Shocker being used in an Evil Versus Oblivion moment? That is what I want from comics. It’s like Zub reached into my brain and picked the absolute perfect character for this moment.

Granted, Shocker doesn’t go full hero — though while we’re on the topic, I think he’d be a great addition to the Uncanny Avengers. Shocker and Scorpia aren’t big on helping Rogue stop monsters, but they’re still involved. 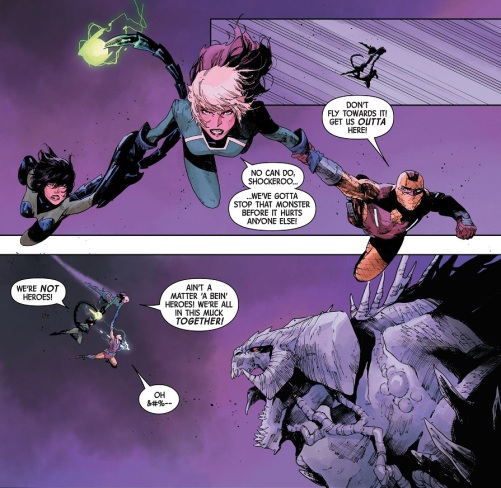 Spider-Man: Homecoming had nothing on this!

And that’s enough for me. I don’t read Uncanny Avengers and I’m avoiding most Secret Empire tie-ins, but when a writer I like seems to literally read my mind and make my comic book wishes come true, I gotta respect that and buy some new comics!

Nobody respects the codename anymore

Also, I am now totally ‘shipping Shocker and Scorpia. So that’s a thing.

Double also, this almost makes up for Zub killing off Mach X a couple weeks ago. Almost.

← My Thoughts on the New Doctor!
The 6 Characters On My Defenders Team →