Superman Unchained is the Stupidest Name of All Time

Do you remember a few months ago when DC started hinting at a new Superman series written by Scott Snyder and drawn by Jim Lee? At the time, the comic was rumored to be called ‘Man of Steel’ to coincide with the big movie of the same name.

Instead, DC have revealed that the new comic will instead be called ‘Superman Unchained’ – quite possibly the most ridiculous name ever. 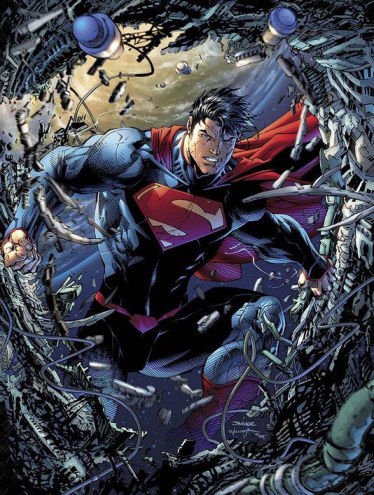 Here is the announcement article at USA Today. Reading that article makes me question – and not for the first time – what the hell even goes on at the DC editorial offices. According to Snyder and Lee – who, don’t get me wrong, are two of the biggest talents in comics today – the series is going to be like every other Superman series ever. It’s going to star Superman as a superhero and include his supporting cast, like Lois Lane. There doesn’t seem to be any special gimmick or pull or reason for the series to exist.

What the hell is the ‘Unchained’ even supposed to signify? Is every cover going to feature him breaking out of chains? And why chains? Since when has Superman ever been chained or had a problem with chains?

Why not call it ‘Man of Steel’ like the freakin’ movie!?

What about the comics already being published, Superman and Action Comics? Why not just put Snyder and Lee on one of those series? There’s no way Superman is going to be able to support three ongoing series. Batman can barely pull it off, and Superman is no Batman.

Speaking of which, DC is also bringing back the Superman/Batman team-up book, because they want to make money. Comics like Hawkman and Blue Beetle are being cancelled to make way for even more Superman and Batman comics. This is the future of comics from the Big Two publishers, people. Soon all we’ll see are Superman, Batman, Spider-Man and Wolverine comics, with other characters only appearing in team-up books.

Still, Superman Unchained is a stupid name and it just seems to me like DC is shooting themselves in the foot when it comes to Superman and Action Comics.