← Oh Hey, Check Out This Trailer for Space Force!
The Kevin James Renaissance is Upon Us →

What’s this? I have more than one comic to review this week? And were I a more diverse man, I’d have a bunch of comics?! The industry is slowly coming back to life with a pile of new digital releases this week, and I was able to catch up on two of my pre-pandemic favorites: Ant-Man and Lois Lane!

It’s not particularly fair to award Comic Book of the Week this week, but I’mma gonna give it to Ant-Man just because I liked that issue better than the other one I read. Both were good comics though. Good enough, at least.

Pam, we hardly knew you

Meanwhile, I continue to busy myself day-to-day with bouts of XCom 2 and Days Gone in video game world. I’m smashing my way through one TV show after another, be it DuckTales, Harley Quinn, Rick and Morty, Dead to Me or, this weekend, the final season of She-Ra and the Princesses of Power. I also finally caved and splurged on some LEGO to keep up my spirits. Stay safe out there, everybody! 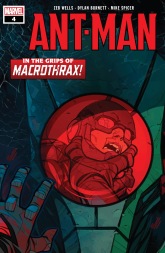 I am loving this series and am glad to see it return. The final two issues will be digital only, I believe, which is fine for me because that’s how I read my comics.

Macrothrax steals Scott’s last Pym Particles, destroying the ant colony where he was living in the process. Scott and Cassie chase them to the Savage Land, where Macrothrax is meeting with the Bug Lords, who are angry at his plan to come out of the shadows and conquer the world with giant bugs. Ant-Man and Stinger show up and faces the villains, with Cassie’s new helmet destroying the wasp and rhino beetle villains. But then Macrothrax steals her helmet and shoves Cassie off a cliff. Scott goes to rescue Cassie (and needs rescuing of his own), while Macrothrax uses Cassie’s helmet to control the Bug Lords. He has them kill the Bug King and then uses Pym Particles to make the other two Bug Lords into giant monsters, which he will now use to conquer the world.

Solid issue, but more focused on the big plot moves than the strong character work and snappy writing that has come to define this mini-series so far. And considering it’s the penultimate issue, that works just fine. This is the issue that transitions us from the ongoing story into the grand finale, and with plot moves like this, it had to be done. And it works just fine. The threat is really cool and amplifies very well, taking Macrothrax and these Bug Lords and turning that whole deal into a really major threat. And our heroes give it their all in their efforts to stop the bad guys, but they’re only human. Wells writes Scott and his daughter very well and I would love to see this series continue somehow. Maybe give him another mini-series one of these days. I don’t know how it works anymore. But Ant-Man has been a fun little comic and this issue takes the necessary step from story to finale.

TL;DR: The plot moves in a lot of good ways as we gear up for what will hopefully be a grand finale.

I didn’t like this at all. It’s still a good comic, but man, this issue in particular really rustles my jimmies.

Lois Lane is setting a trap for the Kiss of Death, which is where Jessica Midnight comes in, but she’s having problems with her magic. So Renee Montoya explains the Multiverse to Jessica, with the added addendum that something specific is bleeding through the multiverse for Renee, Jessica and the nun that is in the story to help Jessica. And maybe Lois? Like, maybe these are all alternate reality versions of these characters that have bled through? Honestly, it gets a little confusing, and I’m not sure what it has to do with this comic. But anyway, Lois lures the Kiss of Death to her hotel room, but just as she’s taking the shot, Midnight uses a teleportation spell to have the nun and Kiss of Death switch places. Kiss of Death is teleported to the other room, where he gunshot ends up shooting Renee instead.

Also, there was a brief chat between Lois and Superman in the middle of the issue, but I don’t think it added much.

Man, this issue really went off the rails, and not in a way that I liked at all. I suppose it’s my fault for assuming this comic was one thing, when apparently it’s something else entirely. I thought we were dealing with a grounded, street level look at Lois Lane, ace reporter. She’s cracking a big government conspiracy story. She and Renee Montoya are getting into scrapes. She and Superman are dealing with relationship things in an adult and human way. She’s got an assassin after her. But now, all of a sudden, we’re dealing with multiversal bleeding? And alternate characters experiencing alternate lives? And the Lois we’ve been reading might be an alternate reality Lois? And Rucka might not just be using the Question version of Renee because of creative freedom, but because there’s some larger multiverse storyline going on? This all just got really weird, and I’m not sure why. It doesn’t add anything to the story about Lois and her friends taking out an assassin. Then you’ve got the weird idea that the best way to defeat this assassin was the shaky Jessica Midnight doing a complicated teleportation spell that she’s not sure about? And then Renee gets shot? That’s a big red flag for me, dawg.

TL;DR: This normally grounded, character-driven comic suddenly takes a turn for the big, multiversal conspiracy and I don’t like it.

Posted on May 16, 2020, in Comics, DC, Marvel, Reviews and tagged Ant-Man, Lois Lane. Bookmark the permalink. Leave a comment.

← Oh Hey, Check Out This Trailer for Space Force!
The Kevin James Renaissance is Upon Us →