Newsarama spent all last week designing and showing off their own Amalgam characters, and that’s got me in the mood to keep talking about Amalgam Comics and characters! For those not in the know, Amalgam Comics was a joint project between Marvel and DC in the mid-90s where they merged their characters and put out a couple random, stand alone issues.

The world needs Amalgam now more than ever!

Amalgam Comics is everything I love about comic books. Two rival companies came together with their best talent to produce this insane project. Pepsi and Coke have never come together to create some blended soda. But Amalgam was real, I owned and read a bunch of issues, and the world is a better place knowing this existed. So let’s celebrate Amalgam with a list of my favorite characters, and some of the ones that I think are just a great combination!

Please feel free to share your own favorite Amalgam character combos in the comments!

Whoever got to sit down and come up with all these character combinations must have had a blast! Paste-Eater Pete? Come on! That is genius! My personal favorite, of course, is Multiple Maid, the combination of Multiple Man and Triplicate Girl, because I will always love me some Multiple Man. This team hung out with Spider-Boy for an issue that dealt with the Arach-kid getting shuttled through different timelines, with the Legion of Galactic Guardians 2099 having their lineup and entire makeup change depending on how Spider-Boy was changing history. So this was just a fun issue overall of all sorts of crazy character combos. Bouncing Ball, Timberwolf by Night, Sparkler, Living Colossus; this whole issue is just a treat.

That’s Access he’s attacking. Let’s not get into that rabbit hole…

One of the more minor characters in Amalgam, I thought Skulk was a nifty combination of Bruce Banner and Solomon Grundy. There are so many characters you could cross with the Hulk, and the creators went really subtle with it. Bruce was a supporting character in Dr. Strange Fate and only had a couple of good scenes, but they were memorable to me. It’s just one of those combinations that works for the thought that went into it. 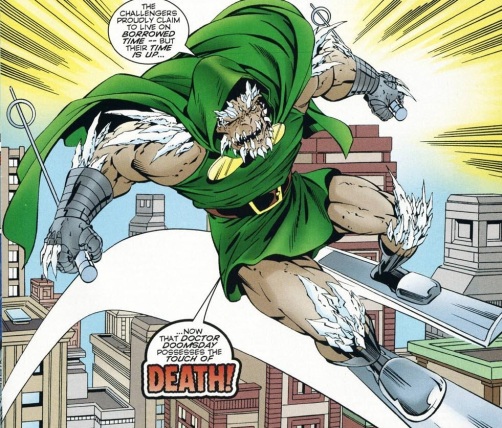 Why yes, Doctor Doomsday is wearing silvery skis. He stole them from the Silver Rider! Classic storyline.

What an awesome visual! Doomsday dressed up like Doctor Doom! Another brilliant combination, two characters you wouldn’t expect. Doctor Doomsday went up against X-Patrol and the Challengers of the Fantastic, so he got around. He was the ruler of Latkovia, combining fictional countries from Marvel and DC. And he was only the tip of the iceberg for great villains. Galactiac? The Two-Faced Goblin? Spiral Harley? Such a fun batch of characters.

And speaking of good villain combos…

This guy is a fun one! Bizarro and Carnage become Bizarnage, a crazy-sounding villain with a really cool Bizarro-symbiote look that goes up against Spider-Boy. He’s not the main villain of his issue, but kicks things off nicely with his weird vocabulary and cool look. This is one symbiote that should not be forgotten considering all of the symbiotes out there. Also, at the start of the issue, he’s in possession of Johnny Storm. You know, like you do. 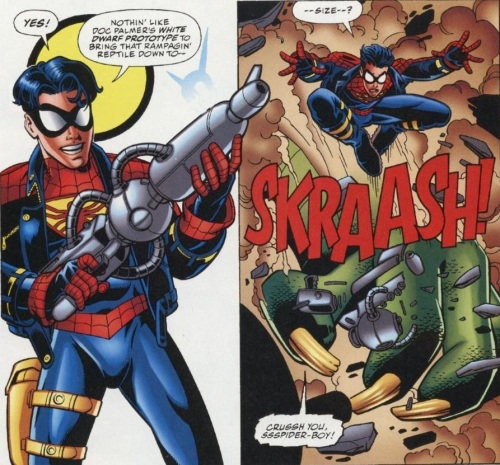 Now we’re getting to the good ones! Spider-Boy is so much fun! A combination of Spider-Man and 90s-era Superboy, Spider-Boy was the star of several comics and embraces everything there is to love about both characters. He’s got the 90s hair. He’s got the 90s leather jacket. He’s got the web-slinging and the quips and the pure joy of being a teen, wall-crawling superhero! They literally call him a “mall-crawling wall-crawler” in his comic. It’s glorious.

I love the little divots in his claws!

We jump from young and fun to dark and gloomy, but also fun! It’s Dark Claw, the true standout of Amalgam! Take Wolverine and Batman, probably the two most popular comic book characters in the 90s, take everything cool about them, and create a truly monumental character! He’s so 90s! He’s so cool! He’s Dark Claw! This is the stuff comic book dreams are made of. This is everything a comic-loving kid could want from the world. And he’s got such great supporting characters! Sabretooth and Joker become Hyena! Robin and Jubilee become Sparrow! What’s not to love?

Posted on May 13, 2020, in Comics, DC, Lists of Six!, Marvel and tagged Amalgam, Amalgam Comics. Bookmark the permalink. Leave a comment.