Once upon a time, I wrote a List of Six about other superhero shrinkers because it fit with the release of the Ant-Man and the Wasp movie. Well this week will see the release of Godzilla: King of the Monsters and I wanted to do something big! So here’s a nice companion piece about other comic book characters who can grow as big as Godzilla! 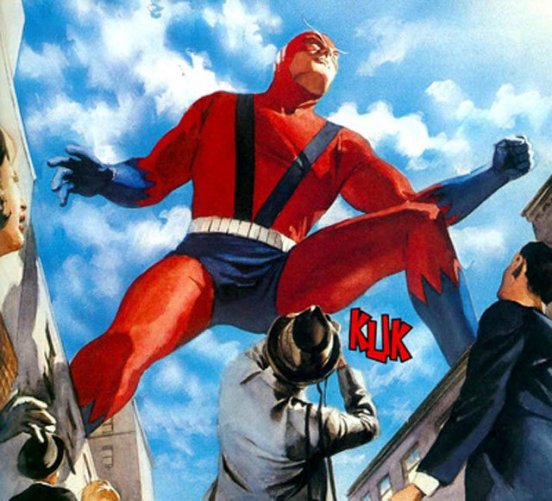 I say ‘other’ because I’m discounting Giant-Man and the Atom, the two most well-known growers in comics. Everybody knows those two, and all the Ant-Man/Yellowjacket/Wasp/Stature equivalents. I wanted to spotlight the other growing comic book characters! It’s also in minor celebration of writer Leah Williams’ Giant-Man comic book series, which sees a new issue this week!

Join me after the jump for the lesser known embiggening superheroes!

A stegosaurus is no big deal

Ee-nay-chuck! Apache Chief was an attempt. The Super Friends cartoons were popular back in the mid-20th century, with the likes of Superman, Batman and Wonder Woman. Then somebody wanted to diversify the lineup with new heroes. Again…they tried. I’d like to think they had good intentions, but man, they created a bunch of racist caricatures. Samurai has wind powers, but he’s named ‘Samurai’ because he’s Asian. El Dorado has a bunch of different powers, but he’s named ‘El Dorado’ because it sounds Mexican. Black Vulcan needed to include the word ‘Black’ in his name for some reason. And Apache Chief has the power to grow into a giant, but he’s named ‘Apache Chief’ and dresses like a stereotypical Native American. Sigh. Apache Chief is only an honorable mention because he’s mostly silly, and he’s never actually been translated into the comics. Apache Chief was strictly Super Friends. He has had better re-imaginings in both the Justice League Unlimited cartoon and Young Justice, so that’s something.

Is that a spaceship or a spacesub?

The Legion of Superheroes only allows one person per power on the team, and their growing hero is Colossal Boy! Gim Allen was from Earth, and he gained his power from a random radioactive meteorite. Seems simple enough. His only notable story was that he married his crush, Shrinking Violet, only for his then-wife to be exposed as a shapeshifter posing as Shrinking Violet. Colossal Boy decided he loved the woman anyway, even after the deception. Good head on those shoulders. Colossal Boy and the rest of the Legion were eventually rebooted and redesigned several times over the years, but best not to get into all of that. 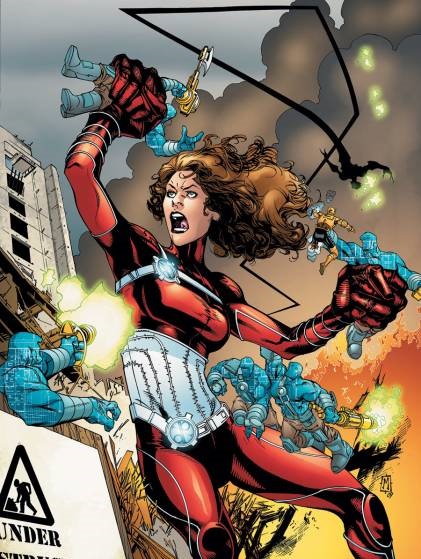 She means all the business

Elasti-Girl is a size-changing member of the Doom Patrol, DC Comics’ weird band of misfit heroes. She was a Hollywood actor who wound up exposed to an unusual volcanic gas while shooting a film in Africa. Originally, she had no control over her size-changing and became an outcast, but she eventually learned to control her powers — only to stay an outcast. The Doom Patrol was notably made up of weird outcasts, but the original Elasti-Girl could simply grow and shrink, which seems fine to me. Later retcons, especially in the TV show, made her more of a goo person who can change shape, and that seems more outcast-y to me.

Something just got smashed!

Atom Smasher is a legacy hero at DC Comics. He’s the godson of the original, old timey Atom, while also being the grandson of obscure, old timey super-villain Cyclotron. He bounced around a couple different DC teams before settling onto the revived Justice Society of America. He doesn’t accomplish much of note, but did once kill a Middle Eastern dictator. I suppose that’s not nothing.

OK, Giganta is a weird one. She’s an old school Wonder Woman villain, from all the way back in the 1940s. She started out as a gorilla who gets mutated into a person in order to fight Wonder Woman. Later retcons of her story would include having her mind transferred into the body of a gorilla, then transferred into somebody with growing powers. Sometime she’s the scientist, sometimes she’s not. She became famous as part of the Super Friends cartoon, where she was a normal person who got her powers from a mystical Native American powder, the same way Apache Chief got his powers. In fact, their origins occur simultaneously. So yeah, Giganta has been all over the place.

His logo game is on point

Atlas also has a long and crazy history. Did you know he was Power Man before Luke Cage was even invented? Yep! He was an Avengers villain with super strength and the like, then lost those powers, then got hooked up with some mad scientists who spliced him with Pym Particles and gave him the ability to grow giant! He took on the name “Goliath”, which was also the name of a separate superhero for awhile. This guy just couldn’t settle on an original name. Erik joined the Masters of Evil just in time for them to go undercover as the heroic Thunderbolts, which is where he took on the name ‘Atlas’. He’s enjoyed that hero life ever since…with the occasional dips back into evil.

He has saved at least one dog!

Speaking of that other Goliath, and the horrible naming conventions for black superheroes, there was once a guy named Bill Foster who gained growing powers while working with the original Giant-Man, Hank Pym. Only Bill went by the name “Black Goliath”. Because sigh. Bill eventually just settled on the name “Goliath” before getting famously killed in Civil War. His nephew Tom would eventually take up the “Goliath” name, bouncing between hero and anti-hero as he saw fit. Personally, somebody needs to give him an arch-nemesis named David.