← The Final Season of Game of Thrones Sure Looks Spectacular!
How Into the Spider-Verse Should Have Ended →

Howdy Ho, Hencharinos? How goes it? What’d you think of Captain Marvel? I loved it! Another hit Marvel movie! Maybe not in the absolute top tier at Marvel, but they’ve set the bar for themselves so high. Captain Marvel is definitely another winner! I’ll have my review up on Wednesday!

Not many comic reviews this week, I’m afraid. I was busy at work this week and just didn’t have time. But we’ve still got some good ones, like Champions and Young Justice! Comic Book of the Week goes, once again, to Grant Morrison’s The Green Lantern. Definitely loving this comic!

Meanwhile, I’m maybe kinda sorta decided to give up on Uncanny X-Men. At least when it comes to reviews. I just don’t enjoy the comic. But it’s also the first time Multiple Man has ever been an X-Man…even if it’s not the real Multiple Man, and is written by a guy who I disagree with on how to write/use Multiple Man. So I dunno. I’ll probably keep reading, and maybe I’ll pop in and out for reviews. Of the new issue, I just don’t care for how it’s written and the direction its taking.

Also meanwhile, for anyone interested, I’m still following along with Tom King’s Batman. It’s gotta really metaphysical lately, and I don’t think I can give single issue reviews their justice. But I’ll be back to that series before too long! The new issue is a really good one!

Hey, look at that! An appearance by an X-Men student character that doesn’t result in her unnecessary death! Did Jim Zub not get the memo?

During a Champions training session, most of the core members are off dealing with their own emotional trauma, like Nova being all jealous that he’s not a superhero anymore. Miles Morales is still struggling with the deal he made with Mephisto, and the sudden realization about the girl he failed to save the second time. He has the team teleporter take him back to Dubai, where he sees a makeshift memorial set up in the girl’s honor at the scene of the fight. He’s devastated, especially when everybody keeps telling him he did a great job saving everybody. They don’t know about the deal he made.

But Ms. Marvel knows, sort of. When she spies the teleporter returning from Dubai, she gets the kid to squeal and bring Kamala to Dubai. She asks Miles to talk to her.

Meanwhile, the other Champions go to Worthington Industries, where Dust is holding off a raging band of anti-mutant bigots from tearing down an X-Men statue. The Champions try to help her and hold off the crowd, but these people are really bigoted. The scuffle is interrupted when Nova’s former villain, Kaldera, arrives and crashes through his ship.

First of all, how nice is it to see Dust? She’s one of the X-Students I’ve always liked, and it’s nice to see that she hasn’t been completely forgotten or, as seems to be the case with these characters, brutally killed for no good reason. I hope Dust sticks around.

Anyway, this issue had a really classic comic book feel to it, largely because of Zub’s narration boxes. You don’t see narration boxes in comics much anymore. That was a neat touch. I’m not particularly a fan of throwback-style comic book writing, but I was fine with it here. This issue bounced around to a couple different things, and I think Zub maintained his hold on everything very well. I like the characterizations, though I think he might be struggling a little in try to use all of the new characters. He’s keeping the ship running in tip top shape so far. And the stories are interesting.

Dust for Champions membership! Save her, Jim Zub!

One slight nag I have is that the comic doesn’t necessarily fit the tone that Zub is going for. Maybe it’s just me, but this Champions comic doesn’t feel as real as, say, the individual solo comics of these heroes. Champions still feels too loose to me, like a quaint little extra comic. This issue contains a very important personal moment for Miles Morales. He made a deal with the devil to turn back time, and that deal cost one young woman her life. That’s pretty huge. But the friendly, colorful art and tone of the series betray the seriousness of the problem. Likewise, Kamala Khan was killed last issue. That seems like a big deal. But it also seems like a throwaway.

I dunno. I think this is just me. Champions feels like a bright, casual comic, and the very serious subject matter just doesn’t fit right.

Man, when is this series going to be finished so that I can go out and buy the big collected edition? It’s great!

Countess Belzebeth takes Hal Jordan to Vorr, the planet of vampires, where he must undergo the Blackstar initiation gauntlet. Also, she’s the daughter of classic JLA bad guy Starbreaker, so that’s neat. Hal must slog his way through the vampire planet to obtain 3 pieces of Blackstar equipment, with Belzebeth taunting him from the sidelines. It’s a neat journey, as Hal keeps his confidence strong and fights through the worst vampire craziness that Grant Morrison can throw at him, until he finally succeeds and joins the Blackstars.

Which is all part of the Guardians’ plan. We flash back to the scene from the first issue, where one of the Guardians confronted Hal about a traitor. He reveals that Hal is the traitor…or will be. They believe there’s a Blackstar mole in the Corps, and they want Hal to infiltrate the Blackstars to find the mole and stop Mu’s schemes. So all of Hal’s erratic behavior as of late, like killing that slaver, has been in the effort of getting ‘kicked out’ of the GLC in order to better sell his cover story of joining the Backstars.

Once he’s on the team — and christens himself Blackstar Parallax — Hal is taken to the planet Rann, where Belzebeth wants him to kill Adam Strange as his final test to join their ranks!

This issue was just so full of entertainment and quality character development. It’s a master class in crafting an ongoing comic book tale and I was thrilled at how it unfolded. The biggest part of the issue was the character work on Hal Jordan. The writing really establishes Hal as a confident, willful badass. He faced off against some truly horrendous troubles, but he held his head high and persevered, even getting creative with some of his solutions. This was a great issue to really define and establish Hal Jordan. And I actually really dug the slight sexual tension between Hal and Belzebeth. At least I thought it was there. 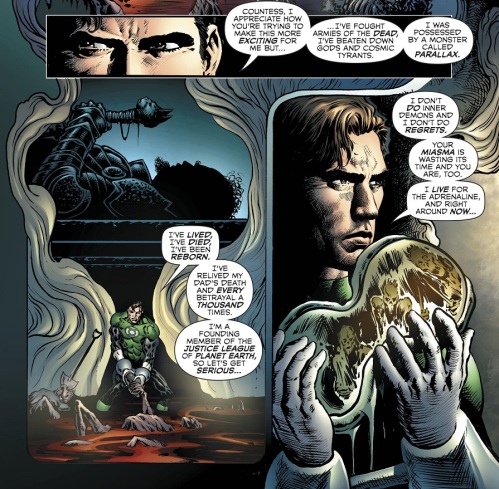 There’s butts to be kicked

Beyond that, it’s a well-crafted story. Morrison found some really fun and creative ways to use the gauntlet and the need for Hal to gather three pieces of equipment. Morrison wove them into the story in neat ways. Like how Belzebeth was wearing the final piece and she challenged Hal to a fight to the death, but he turned it around on her and pointed out that the Blackstars are family and have each other’s back, to which she agreed, helped him defeat the last challenge and willingly handed over the last piece. Then there’s the flashback to the Guardian’s conversation from the first issue. It’s a great callback, one that not only informs and raises the past couple of issues, but also sets up that cliffhanger. In the Guardian’s discussion with Hal, he mentions that Hal will have to even kill in order to create a believable cover, and we’re meant to think that means the slaver from the previous issue. But nope! In order to maintain his cover and pull off this assignment, he may have to kill Adam Strange!

This comic is really getting into the swing of things.

When Impulse landed in Gemworld, he discovered Conner Kent! The two have a nice reunion, only to be interrupted by soldiers from Dark Lord Opal. Bart is ready to put up a fight, but Conner, now a simple Gemworld farmer, surrenders. He tries to play dumb about his origins in order to not get taken into custody with Bart. Then his wife and son show up to ask what’s all the hubbub.

We also flashback to some unknown time when Conner left high school to investigate a suspicious S.T.A.R. Labs facility in the desert. He decided he didn’t care for their rules and smashed his way through the lab to find out what was going on — only to find some Gemworld portals, which is how he’s been trapped on Gemworld. Don’t ask me if this is pre-New 52 Conner or what.

Meanwhile, Robin, Wonder Girl and the others are trapped in Opal’s prison pits and they’re not sure how to get out.

This issue itself is good, largely with that final scene, which I really enjoyed. The bulk of the issue is to A.) casually explain the nuts and bolts of how Conner got to Gemworld, and B.) set up the surprise that Conner has a wife and child. The chat between Conner and Bart is nice, but those two main points take center stage. And I really enjoyed the banter between the various team members as they remained trapped in separate prison pits. 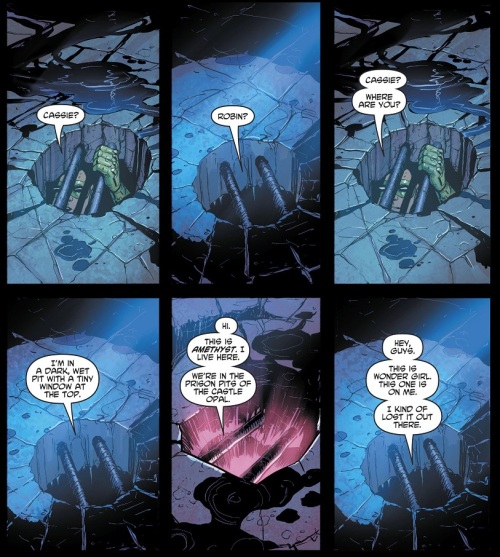 I like so-called “Bendis Speak” dialogue just fine. I like the flow of it and I like the humor of it. So that was enjoyable. I still think he’s rushing through some key character explanations. There’s still been very little written about this Teen Lantern person. But the friendly dialogue is a nice Band-Aid. And the growing story of a Game of Thrones Gemworld could be fun, if he can pull it off.

TL;DR: Young Justice is pretty fun so far. A story is starting to form into something solid, but mostly it’s fun dialogue between fun characters.

← The Final Season of Game of Thrones Sure Looks Spectacular!
How Into the Spider-Verse Should Have Ended →