6 Thoughts on the Second Season of Iron Fist

And just like that, Iron Fist totally redeems itself! I loved the second season of Iron Fist! I haven’t been this excited about Marvel’s Netflix Defenders in what feels like a long time. The action was thrilling, the pacing was solid and the characters were full of life and good development. This was a very exciting season of television. 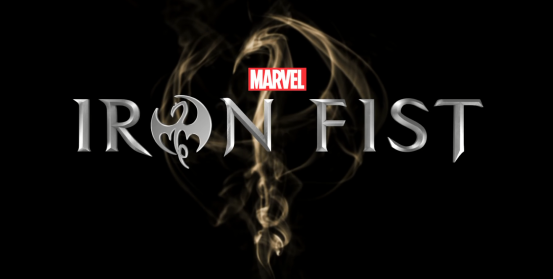 I did not dislike the first season of Iron Fist like most people. I didn’t love it, but I also didn’t hate it. I was largely just fine with it. But I’m very pleased to say that Marvel and Netflix took all of our criticisms to heart, brought in a new showrunner and set about fixing Iron Fist‘s problems. I would have to say that they largely succeed across the board!

First and foremost, the fights are much better choreographed and more fun to watch! This is a show about mystical martial arts, so the martial arts action should be the most important part of the darn show. Iron Fist season 2 makes that happen and is therefore better for it.

Join me after the jump for all my thoughts on the second season of Iron Fist! Expect FULL SPOILERS for the entire season.

6. So much better than season 1 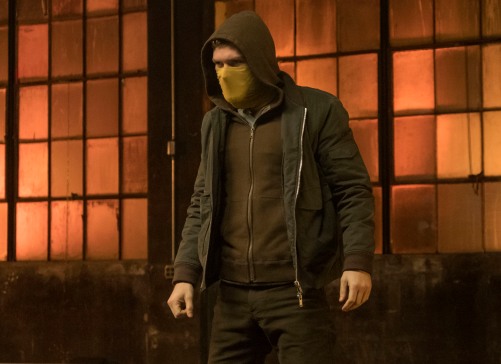 They’re so afraid of the costume for some reason

The improvements to the show are obvious from the get-go. More interesting things are happening, the action is better, and the story has more drive. We’re done dealing with vague mysteries, office settings and stupid groups like the Hand. Now it’s just Danny and Colleen kicking butt and trying to single-handedly stop gang wars. I liked pretty much everything about the new season, from the storylines to the characters to the fight scenes to the occasional humor. I don’t think I have any complaints; there wasn’t a weak link in the bunch for me. The new characters were interesting and the returning characters all had new things to do to occupy their time and keep us invested.

The best word I can use to describe the second season of Iron Fist is “exciting”, and it’s been a long time since I’ve considered any of these Netflix Defenders shows to be exciting. There’s just a better energy with Iron Fist now, and that really propels the season throughout.

5. I don’t like that the Iron Fist is so easily transferable

The new season did a lot to course correct Danny Rand as a character, making him more likable, and making his obvious character flaws into options for character growth. I really liked Danny this season. But I don’t like the suddenly reoccurring idea that superheroes need to give up that which makes them a superhero (like the Thor movies suddenly treating Mjolnir like a crutch) in order to be their best selves. I didn’t like that the show suddenly said the Iron Fist was like a drug to Danny, and that the only way he could move forward as a person was to abandon it. For one thing, the show has never given us a reason why Danny wanted the Iron Fist in the first place. We know why Davos fought nearly to the death to gain the Fist, but why did Danny Rand fight so hard against his brother? Surely he knew he was an outsider to K’un-Lun. What drove Danny to fight so hard to become the Immortal Iron Fist? And why does that not play into his reasons for giving it up so easily at the end of season two?

But beyond that, I think it’s rather ridiculous that the Iron Fist can be transferred so easily to pretty much anybody. The entirety of K’un-Lun’s fighting culture is based around becoming the champion, and therefore worthy of attaining the mantle of Iron Fist. You have to fight a real dragon and plunge your fists into its dying heart in order to gain the power of the Iron Fist! But apparently all it takes is a magic bowl, a couple drops of blood and a fancy tattoo and you can just take the Iron Fist power away? And just have it yourself like it’s no big deal? Why even bother with the fighting tournaments to the death? Or the freakin’ dragon? Just keep passing along the power via casual afternoon ceremony.

All that being said, I’m totally OK with Colleen getting the power in the end. 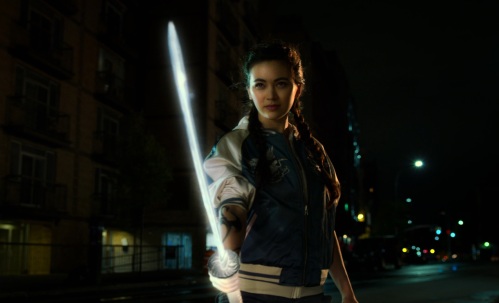 Also not that great of a costume

Colleen was awesome in the first season and she’s even more awesome in the second season. She gets some of the best fight scenes, she has a really solid bunch of plot lines, and having her end up with a badass power sword is damn cool. Colleen Wing is an awesome character, and if the show was deadset on doing this weird power transfer storyline to begin with, I’m definitely down with Colleen ending up with the power…for now. We’ll see what future seasons hold.

4. My favorite scene was the couples dinner

I am, theoretically, an adult and I could never make a dinner this good

There are a lot of great scenes and cool moments in the season, but my absolute favorite scene was in Episode 3, when Danny and Colleen welcome Davos and Joy into their home for a tense dinner. It’s genius in its layered complexity. Here we have the two heroes sitting down for a meal with the two villains, something you simply don’t see a lot in any story. I love that kind of creative thinking. Great conflict comes from putting characters together in weird and unique situations and seeing what happens, and this is a perfect example.

Even better is that the scene fits in the context of the season. Danny and Colleen have a new apartment, of course they’d invite friends over to hang out and show the place off. There is a world where this dinner could be exactly what it appears to be on the surface. But we know, and everyone involved kind of suspects, that evil is afoot. It’s funny watching Danny try and suss out what’s going on without tipping his hand that he thinks something is going on, and it’s funny watching Joy and Davos pretend they’re in a relationship. Then Colleen cuts the ridiculousness and they all really start getting to the heart of the matter.

It’s a fun scene, and the sort of unique situation that good fiction needs to really draw out the best in its characters.

3. Davos was a great villain!

He should have worn the mask

Davos was great in season one and he’s even better in season two. I like his tight, always on the edge aesthetic. He’s the extreme example of everything Danny was taught in K’un-lun. He’s as wound as barbed wire, but only because that’s how he was raised and trained. He’s the product of poor parenting and hard, ancient traditions. And when he’s set loose upon the world, it all goes to hell. I love that he’s got generally noble intentions. He spent his whole life fighting to earn the Iron Fist, and then it was denied him by his already less-than-supportive parents. In Danny, he sees his people’s entire legacy tarnished by an outsider. I like that inner turmoil for Davos, that he loves Danny like a brother, but can’t stand to see Danny besmirch what is essentially Davos’ religion.

Then when he gets the power of the Iron Fist, I like that Davos intends to use it to do good. He wants the power to continue the legacy of the Immortal Iron Fist, not for any other evil or nefarious purposes. That it drives him off the deep end is just the nature of absolute power and corruption, and this own unhinged soul. But he’s not evil for evil’s sake. He’s got a clear path in life, clear goals and intentions, and a clear story on how he turns to the dark side. And actor Sacha Dhawan nails that intensity, but also the occasional gentleness.

Joy made for a pretty great antagonist, too. I liked the two of them together, a villain team-up between total opposites. They help each other and hurt each other in equal measure, and their team-up only leads to destruction and bad tidings. I liked Joy as the spoiled rich kid allowing her pain to take her too far overboard, and then desperately attempting to course correct by the end. It worked for her.

Iron Fist did a great job with the villains/antagonists this season.

2. The Daughters of the Dragon need to be the next show 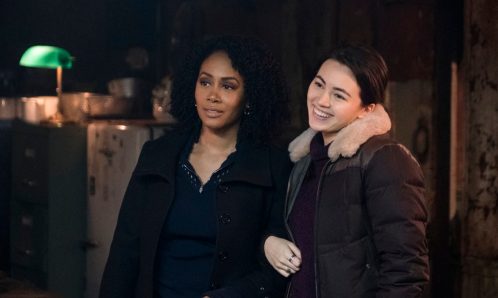 You know they want it

They have to be toying with us at this point, right? Obviously Marvel and Netflix heard the complaints about the first season and made some changes. So surely they’ve also heard the praise about how awesome Colleen Wing and Misty Knight are in whatever shows they appear? Why else would those two have such prominent screen time together? I didn’t miss Claire Temple at all, though it is kind of sad that Rosario Dawson won’t be around much anymore. She’s great! But the Daughters of the Dragon are legit awesome, and surely Iron Fist was dropping all manner of hints that the pair of them would break off and become investigators/badasses for hire, right?

Either way, Marvel could do a lot worse than giving those two the next new show. I’d rather have a Daughters of the Dragon show than Moon Knight.

1. I Want the Seven Capital Cities of Heaven more than anything else in the Marvel Cinematic Universe

I was pleased with the finale of season two, but the review I read beforehand on io9 teased a really crazy, wild final two episodes and I got my hopes up for the Seven Capital Cities of Heaven and their fighting tournament. When that didn’t pan out, I was disappointed, but still quite pleased with the end of season two and the phenomenal tease we got for season three. That teaser in Japan dropped enough Iron Fist mythos Easter Eggs that my disappointment was more than solved.

Still, I gave it some thought and realized that the Capital Cities fighting tournament is the No. 1 comic book event that I want to see happen in the entire Marvel Cinematic Universe.

I want Orson Randell and the secret legacy of the Immortal Iron Fist. I want to meet the Thunderer and the August Personage in Jade. There’s no way K’un-Lun is really gone. Surely its hidden as part of the upcoming tournament, right? I want Fat Cobra and Dog Brother #1, and especially the Prince of Orphans. I want the show to incorporate Davos, the Crane Sisters, Madame Gao and the Bride of Spiders into the deeper mythology. I want the fighting tournament. I want the Colleen, Misty and Luke Cage B-story.

I want it all, man! I want the revolution! I want these two, maybe three, seasons of Iron Fist to have all been building towards the Seven Capital Cities of Heaven.

Otherwise, what has been the god damned point? Of the Netflix Defenders? Of making Iron Fist a TV show in the first place? Of giving him more seasons after that disastrous first one?

If they don’t make give us the Seven Capital Cities of Heaven and the fighting tournament, what has been the god damned point of any of this?!