Animals are a popular, reoccurring theme in superhero comics. Batman and Spider-Man are two of the most popular fictional characters ever. And they’re just at the tippy top! We’ve also got Ant-Man, Blue Beetle, the Porcupine, Robin, and a host of many, many others.

Then there’s the special class of animal-themed characters who are basically just a giant, humanoid version of an animal! This list is about them!

Sometimes it’s a normal person in a big, themed costume. And sometimes it’s a normal person transformed into a beastly monster animal. Either way, giant humanoid animal characters are all over comics! Most of the times they’re villains. As if big humanoid animal people can’t be heroes! Either way, I’ve ranked them and put together a list of the best ones! For fun and profit!

Join me after the jump.

The other guy, behind the rodeo clown

A punching bag of all punching bags, the Armadillo is Antonio Rodriguez, whose genes were spliced with those of an armadillo by the villain from Jessica Jones season 2. He became this big hulking monster dude and is frequently used to fill out bad guy team rosters — though he was once a member of the heroic Rangers superhero team in Texas, for a short period of time, at least. Armadillo is also known to have a string of nice girlfriends who are able to overlook his appearance to be with him. He’s a swell guy, apparently.

At least the woman also gets to enjoy going pantsless

Grace Balin is probably the only female big humanoid animal character, so she definitely deserves a spot on this list! Grace has a doctorate in marine biology and worked at the Gotham City Aquarium. When a horrible accident cost her the use of her legs, Grace developed a regenerative serum from killer whale tissue, which causes her to turn into Orca and regain the use of her legs. That kind of stuff is hella illegal, though, so she turned to a life of crime. All of this earned her a spot in The LEGO Batman Movie, so she’s got that going for her, at least! 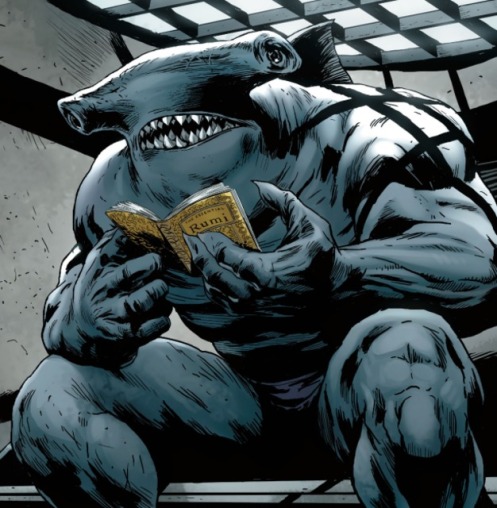 I haven’t read that one

What is it with DC Comics and nautical themed giant humanoid animal people? King Shark isn’t an ordinary person turned monster. He’s actually the son of the Shark God, and is biologically this man-shark dude. He wears it well. King Shark is big, angry and eats whomever he wants. He was once a member of the Secret Six, and most recently was with the Suicide Squad. He even made a big, CGI-heavy appearance on The Flash TV show! This guy is going places!

He could probably hang a lot of people from gargoyles

Need a new Batman villain? Why not just reverse his name? Problem solved! Dr. Kirk Langstrom is a little more in depth than that. Seeking to turn a bat’s echolocation into something handy dandy for people, Langstrom developed a serum that could turn him into a giant bat humanoid monster man. He can fly and everything, even that echolocation thing he was originally concerned with. Sometimes he’s evil, sometimes he’s good, sometimes his wife joins in the on fun, and sometimes she’s evil, and sometimes they have kids. It’s a whole thing.

Dr. Curt Connors was another scientist trying to give humans helpful animal traits, like a reptile’s ability to regrow limbs. But Connors’ serum (always with the serums, these guys), turned him into a giant, rampaging lizard man! One smart enough to retain the white lab coat, because he’s a scientist, dammit! Sometimes he’s evil, sometimes he’s good, sometimes his wife joins in the on fun, and sometimes she’s evil, and sometimes they have kids. It’s a whole ‘nother thing.

The Rhino is the best of the big humanoid animal super villains. That’s a hill I’m wiling to die on. He’s big, his size is a defining characteristic of the character, and he makes for a great opponent for Spider-Man to fight. Even better is just how tragic the character can be. He’s not a scientist who turned himself into a monster out of hubris, or a rhino deity. He’s a dumb schmuck crook who got tricked into this experiment, and is now struck in a large, unflattering rhinoceros suit. Sometimes he finds love. Sometimes it’s taken away. Most of the time he’s OK. But sometimes the Rhino yearns for a normal life. Won’t someone free him from that unflattering rhinoceros outfit?