Robin is one of my all-time favorite comic book characters, and Tim Drake is my favorite Robin. And as a comic book geek who likes what he likes, you can imagine how bummed I was at how drastically the New 52 altered Tim Drake’s origin story. The biggest change the New 52 reboot made was that Tim Drake was never Robin in name, only Red Robin, as if the adjective changed anything. There were also changes to how he became Robin — like the name “Tim Drake” being a witness protection name, and taking away the fact that Tim figured out Bruce and Dick were Batman and Robin.

Well guess what? There’s good news, everybody! Because self-proclaimed Tim Drake fan James Tynion IV has decided to change everything back in the pages of Detective Comics! Now and hopefully for all time, Tim Drake was Robin!

This takes me way back

Look at the ‘R’ insignia on his chest! There’s only one R! That means he was Robin for reals, people! Tim Drake was legitimate! Rebirth has finally lived up to its purpose! At least in my eyes!

And that’s not all! In this week’s issue of Detective Comics, Tynion re-establishes Tim Drake’s original origin story! Once again, Tim was a smart kid who deduced on his own that Bruce Wayne and Dick Grayson were Batman and Robin, and he tried to convince Dick to be Robin again — only to take up the role himself!

It also sounds like “Tim Drake” is going to be his real name again. No more of this witness protection retcon! That was always poorly thought out anyway!

As a Robin and Tim Drake fan, I couldn’t be more pleased. It’s been a long several years since New 52 drastically altered my favorite DC Comics character, but I’m glad to see that the wheel of comics has once again turned things back in my favor!

Of course, this raises newer, weirder questions about Robin continuity.

In the original stories, when Damian Wayne showed up to be the new Robin, and Tim Drake graduated to being Red Robin, he took on a whole new costume and purpose. It was a natural transition, even if the name “Red Robin” was a weird step forward. It’s no Nightwing, but DC made it work.

But now? That picture above is Tim Drake’s first costume as Robin.

And this is Tim’s Red Robin costume for Rebirth. 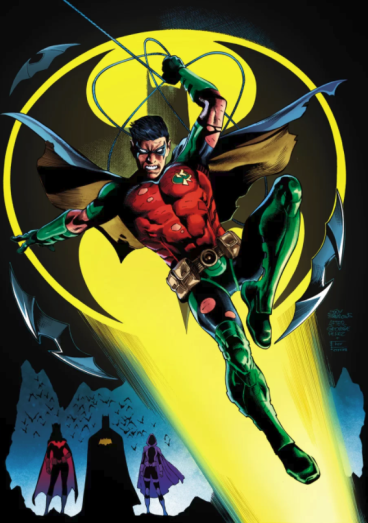 It’s like Damian probably whined about being Robin, but Tim clearly wasn’t done with the job, so to make everybody happy, he just added the word “Red” and a second “R” to his costume. The letter is probably just taped on.