← How Guardians of the Galaxy 2 Should Have Ended
New BoJack Horseman is Right Around the Corner! →

6 Characters Who Aren’t Going to Survive Game of Thrones

Game of Thrones has reached a point where everybody’s favorite characters have stopped dying. The show shocked the world by killing off everyone we thought was going to be the protagonist, and now we’re left with a motley crew of heroes and villains who, I think, will fight until the very end.

But this being Game of Thrones, a lot of somebodies aren’t going to make it to the end!

One of them is already dead!

Between the current season and the next, there are only seven episodes left of the entire series. That’s less than an entire regular season. The show is literally almost over. By this time next year, Game of Thrones will be finished. I don’t have any predictions for how it’s going to end. I don’t know who is going to end up on the Iron Throne or who is going to bone who before the finale. But I have a couple of ideas for who is probably going to die before the end.

Join me after the jump for my Game of Thrones death predictions! There will be SPOILERS to the series so far. And please feel free to share your own in the comments! 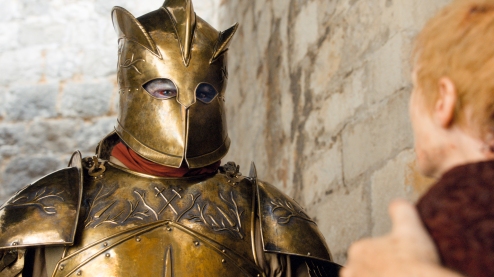 This show has two different kinds of zombies!

Cleganebowl is happening. There’s no stopping it. Maybe it didn’t happen when we all expected it to, but there’s no where else for the show to go than a showdown between the Mountain and the Hound. And I believe the Hound will win. Part of me wants to say that the Hound will die, but honestly, I think he will end with a peaceful retirement. The Hound is one of the hearts of the show, and after a lifetime of fighting, he’s going to get a semi-happy ending, I bet. He’s going to defeat his brother and hang up his sword for good. So see you later, zombie Mountain! 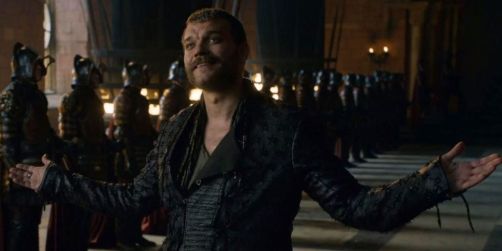 I don’t care for Euron Greyjoy. And normally, the characters we hate are the ones who get to live, but I think Euron is going down like the Drowned God. He’s a lunatic and a villain, and there’s no way he gets to be king of the Iron Islands. He may have defeated his niece and nephew in a real show of power for the Lannister forces, and he’s probably got some real horrifying evil to inflict before the end, but I bet Euron is going to suffer a fate similar to Ramsay Bolton and King Joffrey. The ones we really hate get the really gruesome deaths.

This one stings the most, but Jorah Mormont probably isn’t going to survive until the end. Yes, he did just overcome grayscale, a previously untreatable fatal disease. But that was just to put him back into the fight where he can fulfill his destiny and die doing something heroic for Dany. I don’t know what, I don’t know how, but he’s going to return to her side in an epic moment and he’s going to go down like the big damn hero he is. I mean, it’s not like he’s going to get to marry Dany in the end. So either he spends the rest of his life as a lovelorn old fool, or he goes out like a champ!

Hopefully he gets to meet Lady Lyanna Mormont before he goes.

Theon’s life has been suffering and cowardice, which means he’s earned a big, heroic, sacrificial death. And it just so happens that he’s got a beloved sister captured by the enemy. It sounds perfectly reasonable and believable that Theon Greyjoy will finally do something awesome and heroic to save his sister, proving that he could be brave in the end.

Granted, this being Game of Thrones, it’s also entirely possible that Euron kills both Theon and Yara and becomes some crap king on the Iron Islands, but that would be really, really depressing. I really like Yara and I hope she gets saved and gets to team up with Dany in the future.

So totally needs to die

She’s gotta die. There’s no other way around it. Cersei is the human villain of Game of Thrones. And even though Game of Thrones is known for bucking storytelling tradition, there’s no way the show is going to end with the bad guy winning and all of our heroes being killed off. There’s no way Cersei Lannister will kill all the dragons, kill Dany, kill Jon Snow, kill Tyrion and remain on the Iron Throne like some dead-souled, careless monster. There’s no way the remaining handful of episodes are all going to be about how Cersei just crushes Dany’s armies. She’s gonna die, Dany will take the Iron Throne and then the show will switch to fighting the White Walkers.

Nobody calls him ‘Kingslayer’ anymore

Oh yeah, Jamie’s gonna die, too. It’s going to be sad, because we’ve all come to like Jamie. But he doesn’t get to survive in the end. Not with him being as complicit as he is with his sister/lover’s horribleness. Not with him pushing Bran off the tower at the beginning of the show. Jamie Lannister is the show’s redemption story. He’s the one who goes from arrogant asshole who kills kids and bones his sister to the repentant warrior who just wants to do what’s right. He’ll likely even have a hand in the death of Cersei (pun intended). And once she’s out of the way, Jamie will join the others in fighting the White Walkers. He’ll get to team up with Brienne again and then he’ll die in the epic final battle!

I guess that means Brienne might die, too…dang. I sure hope not!

Honorable Mention: Originally I had Drogon the big, black dragon at the top of his list. I thought for sure the big guy was going to die and we were all going to be eternally sad. But then the show when and killed one of the secondary dragons, Viserion, and turned him into an ice dragon monster. So now I’m not entirely sure what the fate of the dragons will be! If Dany does ascend to the Iron Throne, I sure hope she gets to keep at least one dragon. Or, at the very least, she’ll discover some new dragon eggs!

Posted on August 23, 2017, in Lists of Six!, Television and tagged Game of Thrones. Bookmark the permalink. 3 Comments.

← How Guardians of the Galaxy 2 Should Have Ended
New BoJack Horseman is Right Around the Corner! →