← Introducing: Marvel Rebirth!
Always a Good Day with a New Only Leigh Cartoon! →

Guten Morgen! Most comic book companies feature heroes and villains based in America. Heck, Marvel Comics has pretty much every single superhero in their stable hanging out in New York City specifically. I bet it gets pretty crowded! But on those rare occasions when a hero goes on a world tour, they get to meet superheroes from other countries!

I’ll be kicking off a new world tour List of Six series with Germany. I did a list on French superheroes a few years ago, and it remains pretty popular today (thanks Google search!). There are a lot of fascinating world superheroes out there, and a lot of neat ones from Germany specifically! So join me after the jump for the best German heroes and villains in mainstream comics!

X-Statix in a nutshell

I will seize any opportunity I can to talk about X-Statix, so I wanted to throw in this off-beat suggestion of a German superhero: Wall! It’s so on point, you guys! Wall was a member of Eurotrash, a group of European stereotypes who kidnapped princess Henrietta Hunter. Like all characters in X-Statix, The Wall was brutally murdered when it came time for the superheroics. His real name was Gunter Gross, and he got his powers when a part of the Berlin Wall fell on him, activating his mutant gene. X-Statix was crazy, you guys! 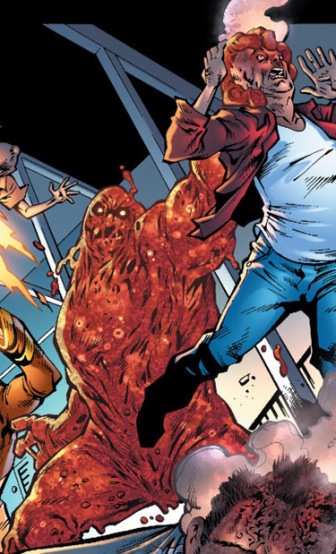 Not to be confused with Chemo

Plasmus is not the only giant blob monster character at DC Comics, which is pretty weird. Otto Von Furth was a miner in East Berlin who became trapped underground and was exposed to lethal radiation, turning him into that walking pile of muck you see before you. Plasmus would go on to join the Brotherhood of Evil and battle the Teen Titans time and again, which earned him a spot on their cartoon show.

Schultz Heiliggruppe is actually a superhero team! They were Germany’s first superhero team in the Marvel Universe, composed of Hauptmann Deutschland (Captain Germany), Blitzkreiger and Zeitgeist. The trio were tasked with hunting down and killing any of the Nazis who fled after World War II, so basically a whole team of badass German superheroes who act like Magneto from the start of X-Men: First Class. Hauptmann Deutschland (also known as Freedom Fighter in Germany, and Vormund in America) was pals with Captain America and they partnered a couple times. Blitzkreiger had pretty ordinary electricity powers, having been struck by lightning while doing his job as an electrical technician on a utility pole. 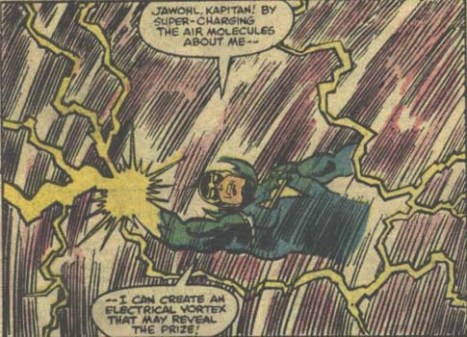 The name doesn’t hold up to history

Blitzkreiger would eventually be betrayed and murdered by the third member of the team, Zeitgeist! Zeitgeist started out as a ‘hero for the people’ known as Everyman, but when some real good guys convinced him he was doing more harm than good, Zeitgeist fell under the spell of the evil Dr. Faustus, leading to him infiltrating Schultz Heiliggruppe and slaying poor Blitzkreiger.

The good old days of flying

Enemy Ace is one of those characters you can point to for why comics can be pretty crazy! Hans Von Hammer was a German pilot who flew in both World War I and World War II, and even though he was flying for Germany both times, he was known for his strict code of honor. Enemy Ace was so honorable that when he found out what the Nazis were doing, he defected in disgust and turned himself over to Sgt. Rock and Easy Company. Enemy Ace was usually just used in old war comics, but he’s had a few interactions with time travelers, like Booster Gold, and he was once pulled out of time to fight dinosaurs in the War That Time Forgot. So like I said, comics can be pretty crazy!

When Wolverine and Weapon X proved to be super popular, Marvel Comics doubled down and really fleshed out that backstory. They’ve gone back to the well a few times, fleshing it out even more and turning it into madness. But at the beginning, they kept it cool, with guys like Maverick. Christoph Nord was an East German freedom fighter who went hard into the mercenary life. He is a mutant who can absorb kinetic energy and turn it into acidic finger blasts, which is pretty neat. He was recruited into Weapon X and fought alongside Wolverine and Sabretooth on Team X, which is one of the only parts of Wolverine’s history I care about. Those guys had some pretty cool times.

Also created in the 90s, technically

Jakita Wagner is one of the three leads of Planetary, a nifty comic by Warren Ellis from the old Wildstorm Universe. It’s about a team of “Archeologists of the Impossible” who travel the world looking into the paranormal and the superheroic. Jakita is the team’s muscle, with super strength, speed, senses and an apparent penchant for getting super bored. Jakita was born from an unholy union of Planetary’s various important sects, but was given over to a kindly German couple to raise in safety. That didn’t take, she developed powers and went on to get wrapped up in Planetary and all those important sects all over again. 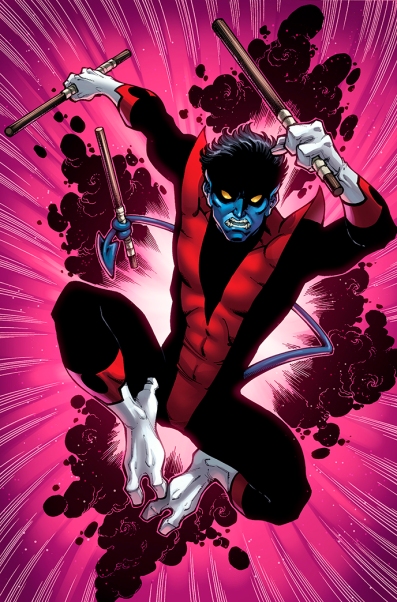 The original swashbuckling, demon-faced, three-fingered mutant adventurer, it’s Nightcrawler! Kurt Wagner (no relation to Jakita) is one of the most famous and popular X-Men. Nightcrawler embodies the very idea of mutants. Yes, you get cool super-powers, but maybe you also look like a blue-skinned demon man, complete with a forked tail. Despite his look, Kurt is a pretty swell guy, always cheerful and eager to be a hero. Alongside his crazy looks, Kurt has the power to teleport short distances, disappearing in a puff of sulfurous smoke and the iconic sound effect BAMF! And remember that sweet opening Nightcrawler scene from X2: X-Men United? Of course you do! That scene was dope!

← Introducing: Marvel Rebirth!
Always a Good Day with a New Only Leigh Cartoon! →